Washington, D.C. A delegation from the Utica, Rome, Herkimer, and Oneida area representing the 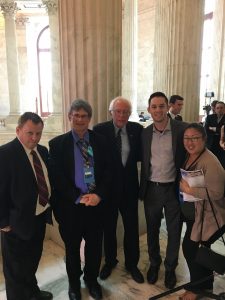 People’s Acton is formed from the merger of five national organizations – US Action, Alliance for a Just Society, Campaign for America’s Future, Center for Health, Environment, & Justice, national People’s Action. Central New York Citizens in Action, Inc. is the Utica chapter of Citizen Action of New York which is part of US Action. People’s Action, one of the largest grassroots, people-powered networks in the country which is made up of more than a million people across 30 states, works for economic, racial, gender and climate justice – and to ensure everyone a voice in our political system.

John Furman, President of the Central New York Citizens in Action, said; “The Central New York Citizens in Action is proud to be here at the founding convention of People’s Action. People’s Action is a new and unique national organization bringing together groups from across New York State and the U.S. into a new potent political force. We are writing a new chapter of American history. We are rising up to undo the damage done by the one percent control of the economy and our political system and building a new majority based on our vision of shared prosperity, equity, justice, caring and compassion, community and democratic values.”

People Action’s Co-George Goehl said: “The resistance is alive and well, beating back attacks on health care and more. Now we are electorializing the resistance – taking the energy of the marches and town hall takeovers to the ballot box to elect truly progressive candidates and ideas.”

Citizens Action Board Member Keith Rubino stressed: “It’s so important for everyone who thinks people cannot take back the government realize that the game has changed for us for the better. Social media allows us the chance to reach directly to the people. The media doesn’t control the airwaves like it used to. We can livestream directly to people across the world if we want. And we can raise money online like never before. There’s never been a better time technologically for this Resistance Movement to truly take shape, grow, and become a real player in the political sphere. I’m proud to be here today and I hope that everyone really looks into supporting People’s Action.”

People’s Action has been at the heart of the resistance, organizing 330 actions to block repeal of the Affordable Care Act. Seventy percent of those events were held in Republican congressional districts. People’s Action has been central to the #ResistTrumpTuesday actions. In Central new York, CNYCIA has been leading grassroots efforts for progressive social change by opposing the repeal of the ACA, organizing the Science March, leading protests to demand Trump’s tax returns, and fighting for climate justice.