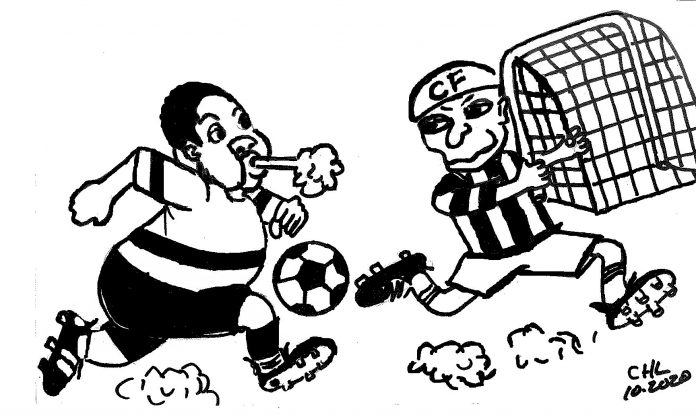 A stream of racially explicit initiatives have been recently announced by the Community Foundation, hereafter the CF. It began with an announcement from former board chair, Ron Cucarro, that he and his wife were donating $50k to establish a racial justice and equity fund. Shortly thereafter, the CF announced that they would match that amount.

The leadership of the Community Foundation knew they had to do something in this new 21st century climate of racial injustice awareness and their pathetic track record of funding Black led agencies.

It would be one thing if the CF had accomplished some stunning success in the past 20 years of decline in Utica’s Black community, but no, things are actually worse. They have presided over the collapse of the two greatest Black led agencies Utica has ever benefitted from without even any recognition of loss or  gesture of support for restoration.

Utica Community Action, which brought in over $10 million annually collapsed in 2002 and seven years later the Cosmopolitan Center in 2009. The Cosmo was a United Way Agency and had been since the mid 20th century.

Since then, neither one of the area’s largest philanthropic agencies, the Community Foundation and the United Way, has funded any Black led agency as if they want them to succeed. Neither have they worked to reestablish a viable Black led agency for the benefit of the Black community. This has been a problem.

Black community leaders were shocked to hear that suddenly the $100k had become $10 million and they were invited to meet on a regular basis to access the $10 million .

Jawwaad Rasheed, a CF board member had begun to convene these meetings and explained at an early session just how the $10 million was suddenly on the table. Jawwaad explained that the CF leadership was begging and pleading for him to accept the chairmanship of the board. Jawwaad initially refused, declined, said he was going to retire. They asked him, “What would it take?”

He said he thought about it, conferred with CF CEO Alicia Dicks and said, “$10 million.” Suddenly $10 million dollars was on the table..

The CF knew they had to do something. Their racially insensitive track record had been revealed by successive articles in the Utica Phoenix. They have accomplished nothing significant for the Black community in the past twenty years. Their solution was to put a Black face in a high place resisting policy change.

Jawwaad accepted the chairmanship with the intention of continuing to bring about substantial change within the organization when he would once be at the helm. He announced the $10 million to the Black community at the first meeting of Black leaders and activists. The trouble is that soon thereafter Jawwaad made it known that this ten million was ten million dollars over ten years.

What is different? There is no set aside for Black folks who have consistently been denied funding all of these years. Therefore, there is nothing different than before.

Where is the goal post for Black folks? It keeps moving.

And how do they reconcile electing Jawwaad Rasheed as their chairman of the board of directors while they continue to exclude For The Good, Inc., the most well developed, longest lasting Black led CBO in Utica from consideration for that funding? They cannot see their implicit racial bias to use a ‘Black face in a high place’ and continue with their White Patriarchal domination. We now understand that Rasheed has succeeded in restoring FTG to full consideration.

They always use the smiling faces of darling little Black children to draw their donors to give but what do they actually fund in the Black community? Take a look at their online solicitation for donors to ‘take the pledge. ’They even include a young man in a Black Lives Matter T-shirt.

Consider that there are Senior Centers at the Parkway, North Utica, East and West Utica but somehow The Leisure Time Activity Center in Corn Hill can never score. There is a community center called MUCC for the refugee population that the CF funded but somehow there is no Black group or agency or CBO that can score restoring a community center in the former UFA building that sits idle.

The Study Buddy Club can’t score. Community Gardens can’t score. On the contrary, For The Good, Inc. has been eliminated from consideration. Why? Because I complained. I have complained over the years that way too many perfectly good, even exemplary proposals are consistently denied. And not just from me and FTG.

No Black led agency can score. And there are among them many who fear complaining that they will suffer the same defunding fate as FTG, should they admit they have been, we as a people, have been racially profiled out of consideration for full funding.

I recall a conference I had at the former office on State St. with Jan Squadrito, Peggy O’Shea and another operative, I believe her name was Barbara. After they finished wagging their heads, sucking their teeth and tapping their pencils on their pads, I realized it didn’t matter what I said to them or offered up as a plan. They saw me as simply a Black woman who had her hand out. A Black woman who didn’t measure up.

I realize now that they viewed me as beneath them in a caste system in which they are very comfortable, a caste system where I was on the bottom. My BA from Kirkland College, years of creating needed programs for the community and maintaining those programs despite the CF, not as a result of the CF, didn’t matter. My accomplishments, awards and experience in business didn’t matter.

This moment in time America has yet to be settled when it comes to racial justice and equity. And in every respect the Community Foundation should really take heed. Perhaps the influence of Jawwaad Rasheed as chairman of the board will bring about the positive change that is so desperately needed at this time.

The Black community will not continue to sit quietly by as  in the past waiting for the Community Foundation to be ‘Woke.’ They may need some help getting there, but, “A change is gonna come.”