Black People Make up a Larger Share of Defendants in 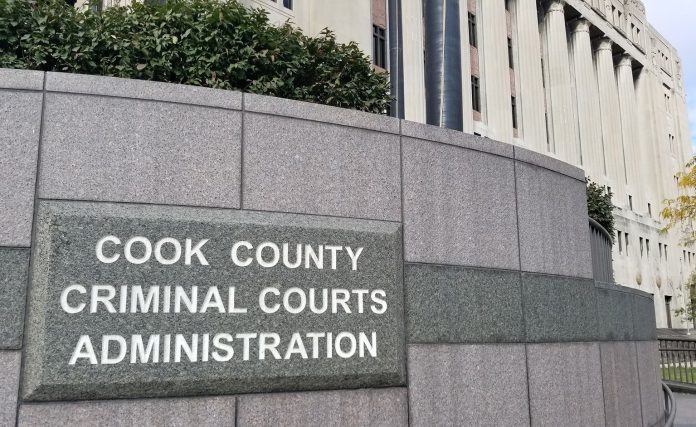 CHICAGO (AP) — The number of people charged in criminal cases has declined steadily in Cook County over the last two decades. But a closer look at the trend reveals stark racial disparities that have only worsened over time. More than 3 million criminal cases were filed in Cook County between 2000 and 2018. Over 60% of those were filed against Black people, according to an analysis of Cook County court data by The Circuit, even though Black people only make up about a quarter of the county’s population.

The rising racial disparities in the court system have also led to wider disparities in incarceration rates. Black people are now incarcerated in the Cook County Jail at more than 17 times the rate of white people, according to an analysis of jail population and census data by The Circuit. That’s the largest gap between the two groups since at least 1990.

The Circuit analyzed data on specific charges to better understand the trends. We also interviewed experts on policing, criminal justice, and race, who offered possible explanations for the shrinking caseloads and growing racial disparities in Cook County courts.

The rising racial disparities in the court system have also led to wider disparities in incarceration rates. Black people are now incarcerated in the Cook County Jail at more than 17 times the rate of white people, according to an analysis of jail population and census data by The Circuit. That’s the largest gap between the two groups since at least 1990.

The Circuit analyzed data on specific charges to better understand the trends. We also interviewed experts on policing, criminal justice, and race, who offered possible explanations for the shrinking caseloads and growing racial disparities in Cook County courts.

“What’s potentially going on is a shift in the types of cases that are getting made or arrests that are being made,” said David Olson, a criminology professor at Loyola University Chicago.

Several scholars suggested that changes to public safety priorities have reduced police and prosecutors’ focus on nonviolent offenses, such as low-level drug possession, theft, and prostitution. At the same time, law enforcement agencies have intensified their efforts around gun cases, which are disproportionately filed against Black men.

Other experts attributed the growing racial disparities to long-standing disinvestment and over policing in Black communities. They argue that local lawmakers have leaned too heavily on the criminal justice system to solve social problems, rather than addressing root causes of crime that disproportionately affect Black people, such as poverty, school inequity, a scarcity of living-wage jobs, and a lack of affordable housing.

Research suggests that the overrepresentation of Black people in the criminal justice system reflects social inequity rather than any correlation between race and criminality. Research also shows that urban areas with high concentrations of poverty and disadvantage are particularly prone to certain property and violent crimes, especially communities that are racially segregated and under-resourced.

While the number of cases in the Cook County Circuit Court has trended down since 2000, certain types of cases have decreased more than others, as public sentiment, political winds, and new laws have changed prosecutors’ approach in Cook County. But while charges have decreased overall, racial and gender disparities have worsened for some types of crimes.

But Black women still make up the largest share of people charged with prostitution in Cook County. And a 2020 study from the Chicago Alliance Against Sexual Exploitation found that an increasing share of the people police arrest for prostitution-related offenses are those selling sex, despite a law passed in 2014 that offers law enforcement financial incentives to target customers.

Similarly, the number of cannabis-related charges brought by prosecutors each year in Cook County dropped by 75% from 2000 to 2018, with significant decreases after Chicago began decriminalizing small amounts of pot in 2012 and when Illinois did the same in 2016.

But even as the overall number of pot charges have gone down, the racial disparities in who is charged with certain cannabis-related crimes have increased.

Ojmarrh Mitchell, a criminology professor at Arizona State University, has written about racial disparities in drug sanctions in the criminal justice system. Mitchell said the decriminalization and legalization of drugs such as marijuana can increase racial disparities, as fewer people are charged with possession and law enforcement focuses more on busting people for delivery and distribution.

Court data analyzed by The Circuit shows that the likelihood a defendant is Black or white varies widely based on the type of charge against them. Black people are overrepresented among defendants charged with cannabis possession — but the disparity is even higher for delivery cases.

A spokesperson for the office of Cook County State’s Attorney Kim Foxx suggested, in a statement emailed to The Circuit, that the increase in Black people charged by the office “may stem from the policing strategies employed in Black neighborhoods that are not employed in white neighborhoods.”

The statement noted that prosecutors typically only review cases after police make an arrest and alleged that the office has tried to change police “behavior” by declining to prosecute more low-level drug cases brought to the state’s attorney’s office by police.

But as prosecutors brought fewer drug cases to court in recent years, they brought more gun cases, which police, public officials, and the media often link to the city’s violence. This trend, too, has resulted in increased racial disparities in the court system. Between 2000 and 2018, the number of weapons cases filed increased by 39% for Black defendants but decreased by 49% for white defendants. Black people, especially Black men younger than 25, are overrepresented among defendants charged in gun cases.

In 2016, a gun violence surge contributed to more than 750 homicides in Chicago, the most since 1997. After that particularly violent year, the police department announced plans to return to hot-spot policing, focused especially on districts in Black and brown communities on the South Side and West Side, targeting people with guns. Since 2018, the department has also employed the controversial gunshot detection technology ShotSpotter, which the city’s inspector general found rarely produced evidence of a crime or a gun.

The number of weapons charges rose 44% between 2016 and 2018, according to The Circuit data analysis.

“The Chicago Police Department is committed to treating all individuals with fairness and respect. We do not target individuals based on race,” said Sgt. Rocco Alioto, a spokesperson for the department, in an emailed statement. He encouraged anyone with allegations of misconduct to file a complaint with the Civilian Office of Police Accountability.

The link between inequity and crime

David Stovall, a professor at the University of Illinois at Chicago, said violent crime tends to happen in communities lacking access to quality health care, quality education, living wage employment, and food. The concentration of poverty and violence in these neighborhoods leads to more policing and more arrests, he said.

“If you have stronger surveillance in those spaces, then you would also see stronger correlations in terms of people being arrested and charged for certain offenses in those areas that may be ancillary to gun violence or completely separate from it,” said Stovall, who studies critical race theory, education, and housing.

The spokesperson for Foxx acknowledged in the statement that “systemic issues within the criminal justice systems are centuries-old” and emphasized that Foxx’s office is working to utilize more diversion programs that connect people charged with crimes to social services instead of incarceration.

Olson suggested that other policy changes could help decrease racial disparities in the criminal justice system, highlighting Illinois’ R3 program, which takes a portion of tax money received from legal marijuana sales and invests in communities harmed by disinvestment, violence, and overpolicing. But he maintained that public officials can’t depend on the criminal justice system to cure social ills affecting people of color that are rooted in long-standing social inequities and economic injustice.

“They’ll always be dealing with racial disparity, despite what the system does, because they’re dealing with the output from society,” he said.

Her organization, Southsiders Organized for Unity and Liberation, is part of a coalition backing the Budget for Black Lives, an initiative aimed at siphoning funds from the Cook County Jail and investing more dollars in disadvantaged communities.

“I think we have to really stop the conversation about what is impossible, sit down, and radically reimagine society,” she said. “Starting with Cook County.”