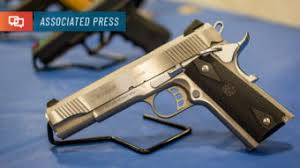 New York Attorney General Letitia James today announced that 17 websites that manufacture and/or sell firearms or firearms components have ceased selling nearly complete assault weapons into New York state, after she directed the companies behind these websites to do so last year. In September 2019, Attorney General James sent cease and desist letters to these companies, each of which was selling incomplete weaponry pieces that could be easily assembled into illegal assault weapons. The possession, manufacture, and sale of assault weapons is illegal in New York, but these companies have been providing the means to violate the state’s assault weapons ban. These companies often specifically advertise their products in a way to evade law enforcement with phrases like, “If they don’t know you have it, they can’t take it.”

“Ghost guns are built, marketed, and sold for one reason and one reason alone — to evade detection of dangerous weapons,” said Attorney General James. “These companies were selling our state’s residents the components to build illegal assault weapons that would endanger each and every New Yorker. Today, as the coronavirus continues to rage across our state and the rest of the nation, gun sales are at new highs, so the last thing we need to do is to allow more illegal assault weapons to flood our already saturated streets. We will continue to fight against the proliferation of ghost guns and assault weapons that only cause death and destruction.”

The 17 sites were selling unfinished lower receivers — composed of either metal or plastic — which hold the upper, lower, and rear portions of a semiautomatic rifle together and are responsible for the actual “firing” of the bullet. Aside from a fully assembled firearm, the lower receiver is the only piece that is independently considered a firearm and is thus subject to federal regulation. However, an incomplete lower receiver — lacking certain holes, slots, or cavities — is not considered a firearm. The companies operating these websites have specifically been marketing their lower receivers as “80%” complete, in order to evade federal regulations. Purchasers on these websites must only make a few small changes with a common drill press to transform an unfinished receiver into a fully operational one. That’s why many of these sellers also sell specialized jigs — or stencil-like precision tools that help guide a drill press — that are specifically designed to aid the milling process for a lower receiver. Once milled, the receiver may be readily assembled into a fully-assembled, illegal assault weapon, typically unregistered and not branded with a serial number. As a result, sellers frequently refer to these products as “ghost guns” because they are virtually untraceable. They do not require that the buyer hold a federal firearms license or submit to a background check.

In her cease and desist letters, Attorney General James stated that these sellers were unlawfully promoting the possession of illegal weapons and did not adequately warn consumers that manufacturing or assembling an assault weapon in New York state is illegal, which could subject them to disgorgement, restitution, and penalties of up to $5,000 for each violation. The websites have now enacted technical changes to prohibit orders into New York state or posted prominent disclosures that inform customers that they will not ship into New York, or a combination of both.

Attorney General James has made the removal of ghost guns in New York a priority while in office. In January, Attorney General James and a coalition of attorneys general filed a lawsuit challenging the Trump Administration’s efforts to allow 3D-printed gun files to be released on the internet. These files would allow anyone to go online to simply use easily, downloadable files with specifications for particular guns, including AR-15s, and then manufacture unregistered and untraceable 3D-printed firearms, in essence, another type of ghost gun. In March, Attorney General James and the coalition secured a preliminary injunction that stopped the Trump Administration from continuing to evade enforcement of the law as it is currently written. And in April — as the coronavirus disease 2019 (COVID-19) continued to spread across the nation and the proliferation of guns increased as well, Attorney General James and the coalition urged U.S. Secretary of State Michael Pompeo and U.S. Attorney General William Barr to enforce federal laws and stop companies from disseminating dangerous files for 3D-printed gun files on the internet.

The Office of the Attorney General (OAG) has, for years, been at the forefront of combatting the proliferation of ghost guns. In September 2015, the OAG announced a 32-count indictment in “Operation Ghostbuster,” which marked the first state law enforcement agency in the nation to indict, and subsequently prosecute, individuals on charges of assembling and selling ghost guns. Additionally, in January 2019, the OAG announced a 41-count indictment in “Operation Punch-Out,” where a ghost gun was one of a number of firearms retrieved and an individual was prosecuted.

Separately, last month, Attorney General James took legal action in a California case to ensure states maintain the right to use various means to protect their residents from gun violence.

Facebook
Twitter
Previous article
Brits remain reluctant to wear face masks, despite having the
Next article
Carolyn Hax: Mom’s haranguing about pregnancy is more than she can bear