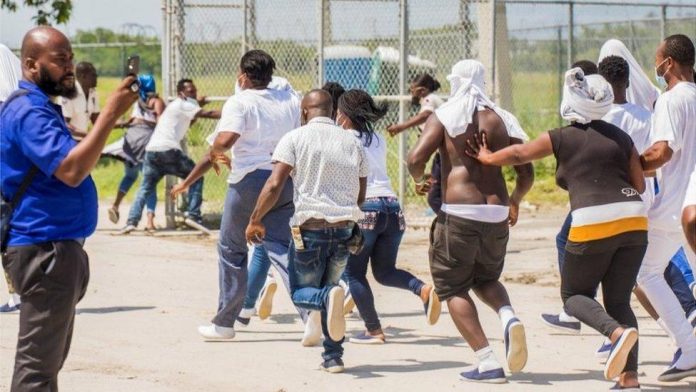 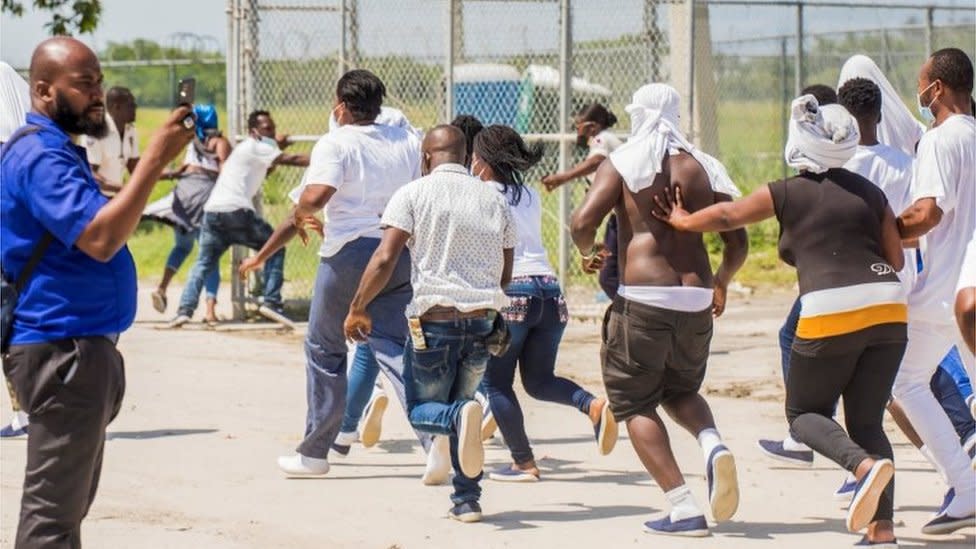 Angry scenes broke out at Haiti’s main airport after migrants were deported to the country from the US.

On Tuesday, migrants at the airport in Port-au-Prince rushed back towards the plane they had arrived on, while others threw shoes at the jet.

Last weekend, the US started flying out migrants from a Texas border town which has seen an influx in recent weeks.

About 13,000 would-be immigrants have gathered under a bridge connecting Del Rio in Texas to Ciudad Acuña in Mexico.

Separately reports have emerged of thousands – mostly Haitians – stranded near the border between Colombia and Panama.

Chaos unfolded at Haiti’s Toussaint Louverture airport as one man attempted to re-board the aircraft. The plane’s crew rushed to close the jet’s doors in time, Reuters news agency reports.

Video footage taken at the airport shows people scrambling for their personal belongings after their bags were dumped out of the plane.

There are reports that some migrants were not told they would be returning to Haiti.

According to a statement from the Department of Homeland Security (DHS), there were two separate incidents at the airport on Tuesday.

A source told NBC News that the pilots on board one of the flights were assaulted on arrival in Haiti and three US immigration officers were also injured.

In a separate incident in Texas, a group of Haitians reportedly fought Border Patrol agents and attempted to escape after realising they were being deported.

At the time, the migrants were being transported on a bus from the town of Brownsville to Del Rio.

“When the migrants found out they were going to be sent back to Haiti, they took the bus over and they fled,” Brandon Judd, the president of the National Border Patrol Council, said at a news conference late on Tuesday.

The removal of migrants has been criticised by Partners In Health, an NGO that has been working in the country.

“During a challenging and dangerous period for Haiti, it is unthinkably cruel to send men, women and children back to what many of them do not even call ‘home’ anymore.”

About 4,000 people have either been deported or moved to other processing centres, according to DHS.

From Thursday, flights could be ramped up to as many as seven a day, according to the Washington Post.

Quoting an unnamed US official, the Associated Press also reported on Tuesday that authorities are also releasing Haitian migrants into the US “on a very, very large scale”.

The official added that many of the migrants have been given notices to appear at immigration offices within 60 days. The official said this approach requires less processing time than having them appear before an immigration court.

The migrants have been waiting in a makeshift camp in temperatures of 37C (99F).

Local officials have struggled to provide them with food and adequate sanitation.

Most of those at the camp are Haitians, but there are also Cubans, Peruvians, Venezuelans and Nicaraguans present.

Meanwhile the Colombian government has said that around 19,000 migrants – mainly from Haiti – are stranded near the border with Panama. Migrants often cross into Panama and proceed on foot as part of a long journey north towards the United States.

However, a senior Colombian official said that many migrants are now stranded near the border as a result of an agreement between the two countries restricting the number of migrants crossing the Gulf of Urabá into Panama to just 250 people a day.

He added that many migrants have been risking their lives by trying to cross the gulf illegally at night on substandard boats.

Many Haitians left the country after a devastating earthquake in 2010, and a large number of those in the camp had been living in Brazil or other South American countries and travelled north after being unable to secure jobs or legal status.

This year has brought further hardship for the impoverished country. In July, Haiti’s president was assassinated – and in August it suffered another deadly earthquake.

Facebook
Twitter
Previous articleLoved ones and strangers alike mourn Gabby Petito; search is
Next articleUFC Real or Not: Francis Ngannou-Ciryl Gane is a bigger