After surviving tornado, small-town Kentucky residents anxiously wonder where they 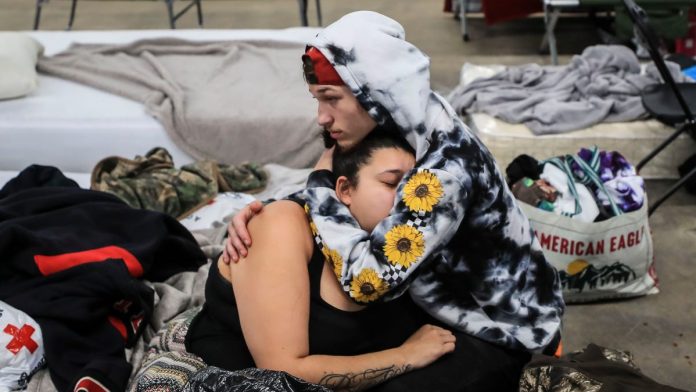 A long-running tornado battered the small town of Mayfield in Western Kentucky.

MAYFIELD, Ky. – They tied themselves with ropes to a basement sewer pipe as a tornado ripped their home apart just a few feet above them.

It was how Shirley Poole, her boyfriend and two grandchildren survived a tornado that left their block, and town, in apocalyptic ruins.

God, she said, had wrapped his arms around them.

But by Sunday – standing near her bedroom wall collapsed by a telephone pole, a child’s desk perched in the open air and home-canned beans scattered among broken glass and debris on the floor – it was the future that was worrying her.

They were fine with power from a car plug and water from bottles and their water heater for now. But anxious questions hung in the air. How long could they live like this? When could they rebuild, and how?

The path of the main tornado that ripped through Kentucky late Friday into early Saturday extended for about 223 miles, 4 more than the record 219 set in 1925. At least 30 tornadoes also wreaked havoc on Illinois, Tennessee, Missouri and Arkansas this past weekend, leaving at least 16 dead.

After Kentucky Gov. Andy Beshear confirmed earlier Monday the tornadoes have resulted in at least 64 deaths, additional reports from county coroners have bumped Kentucky’s death toll to 67.The youngest victim was 5 months old and the oldest was 86, he said.

The toll was expected to rise as the search for survivors continued throughout the week.

President Joe Biden was scheduled to travel to Mayfield as well as Fort Campbell and Dawson Springs, Kentucky, on Wednesday to survey storm damage. Biden declared an emergency in the state Saturday to accelerate federal resources.

Beshear said Sunday that more than 1,000 people had lost their homes as state and federal agencies worked to assess the damage and FEMA’s top official visited Mayfield.

“Housing is going to be such a tremendous need,” said FEMA Administrator Deanne Criswell, adding that the agency would help map out long-term housing plans along with short-term aid.

Electricity, water and gas were still out for many Mayfield residents. Some residents, like Poole, were making do at home, while others left for motels in Paducah or elsewhere, friends’ homes, state parks and temporary shelters.

In a community center in nearby Wingo called The Way, dozens of people had spread toiletries, blankets and teddy bears among a sea of cots. They ate at folding tables.

On one cot was Linda Erickson, 73, who said a resident of her apartment building had died when a wall fell on her. She had hoped to retrieve her cat the next day, but the building had been declared unsafe.

“How am I going to get my stuff out, with movers, when they don’t even want us going in there?” she said.

Next to her was Angela Legat, who had left her apartment because it had no power, heat or water, and it had a dangerous gas leak. She couldn’t afford a hotel, so she came to the shelter and worried about freezing temperatures. Her daughter played on a computer nearby.

Legat, a medical assistant, has not been able to go to work.Her daughter kept asking her a hard question: “When can we go back to our house?” she said.

Legat was among those who were awaiting news about workers at the local candle factory, which was struck by the storm with 110 people inside.

Tornado damage: Path of ‘potentially historic’ 5-state tornado may go down as longest ever in US

Despite the uncertainty, there were hopeful signs in Mayfield on Sunday. Utility crews worked on power lines downtown as crews boarded up windows and piled debris. A drugstore reopened with the help of a generator, and a food truck was serving customers.

Donations poured in from across the county, from a woman who drove up from Georgia to help clean up to Louisville’s Muslim Americans for Compassion, which delivered supplies.

At His House Ministries in Mayfield, residents lined up in cars and crowded the church for water, toiletries, clothing, food and generators. A trailer brought in by nonprofit Mercy Chefs, which responds to disasters, was preparing to cook thousands of meals a day.

Resident Timothy Wharton, who was picking up water with his wife, Amy, said his family survived after he “shut the closet and prayed,” but the house was without power. When kids might return to school or when he could return to his job at a shoe factory was far from certain.

As resources flowed in, U.S. Rep. James Comer, who represents the area, cautioned that rebuilding would be “a very long process.”

As the sun went down, some churches smashed in the tornado held Sunday services in churches outside town.

Bob Waldridge, pastor of the severely damaged Yahweh Baptist Church in Mayfield, said he held a service Sunday in a loaner chapel.

He said he worried about the struggles his flock would face but said the tight-knit community was already helping one another.

“We’ll get through this,” he said.

Chris Kenning is a statewide enterprise writer. Reach him on Twitter @chris_kenning.