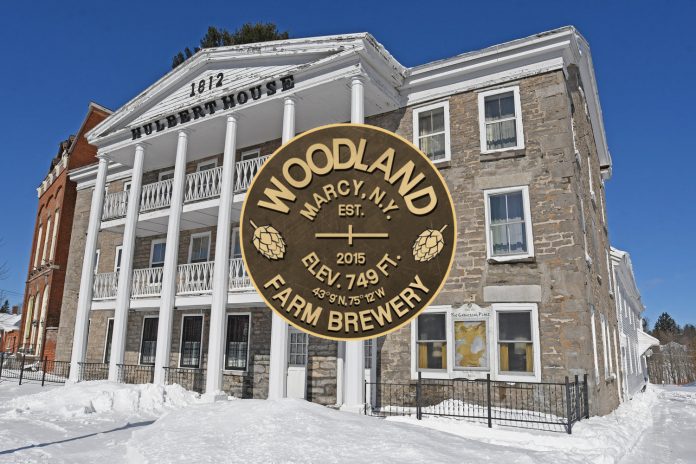 BOONVILLE, NY–Woodland Farm Brewery opened in Marcy in January, 2016 with the goal of brewing great beer, creating a space for community, and giving people a place to escape the craziness of the world with good company and a pint. Since opening, Woodland has added a kitchen, expanded the size of their taproom, and more than doubled their brewing capacity. Woodland utilizes NYS grown grain and hops in their beer and focuses on brewing beer that tastes like beer! Easy, drinking, and approachable beers that can be enjoyed by newcomers to craft beer and experienced drinkers with everything from crisp, clean, German inspired lagers to barrel aged beers and everything in between. Having won several state and national awards for their beers, Woodland aims to bring their flavor to Boonville.

Woodland Farm Brewery Taproom at The Hulbert House will be a destination for locals and travelers alike. As a quick stop off of Route 12, the location is sure to bring in new tourism to the region. With several of the units upstairs converted into rentals through airbnb, guests to Boonville can grab a pint, a bite to eat, and crash upstairs overnight!

After receiving approval from the village planning board, the owners, Keith and Katie Redhead from Ava, have set their sights on bringing life back to the historic Hulbert House on Main Street in Boonville. They plan to renovate and restore the tavern by keeping it as close to the memories everyone shares of the space; complete with a round bar and paintings and moose head on the walls! The taproom will serve beers brewed by Keith at the Woodland Farm Brewery in Marcy in addition to NYS hard ciders, wines, and cocktails with NYS distilled spirits. The taproom menu will also include burgers, sandwiches, wraps, flatbread pizzas, and more. Katie recently resigned from her position with the DDSO to help with the family business and manage the new taproom location. They expect to be hiring bartender and kitchen positions in the coming months and are looking forward to having a taproom where we can all call home!