Legislators & FASNY President: “We Must Ensure That No Firefighter in New York State Ever Has To Battle Cancer Alone”

(CHITTENANGO) — Assemblymen Anthony Brindisi of Utica and William Magee of Nelson and State Senator David Valesky of Oneida rallied today with members of the Firemen’s Association of the State of New York (FASNY), the New York State Association of Fire Chiefs, and area volunteer firefighters asking Governor Cuomo to sign legislation (S.01411-B/A.711-B) all three legislators sponsored to improve cancer coverage for volunteer firefighters.  The legislators and supporters gathered at the Chittenango Fire Department to discuss the importance of the bill to provide coverage for presumptive cancers contracted by firefighters. 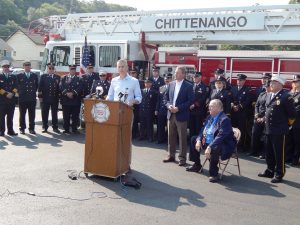 The bill passed in the State Senate and Assembly earlier this year, and will be sent to the Governor for his signature.  It fills in significant gaps in coverage for the volunteers, who currently are not covered for the treatment of many forms of cancer, which often are associated with firefighting. The legislation grants volunteer firefighters presumptive coverage if they are diagnosed with a variety of cancers commonly associated with exposure to smoke, toxins, and other cancer-causing agents, which often happens when they are in the line of duty.

Assemblyman Anthony Brindisi said: “Firefighting clearly leads to an increased likelihood of cancer, and it is imperative that we protect all our volunteer firefighters in the event they receive this diagnosis.  No one who volunteers, day in and day out to serve and protect their community should be denied coverage for a condition that is the clear result of their occupation.  During my efforts over the past several years, I commonly heard compelling stories from supporters of the bill of firefighters who survived cancer—but without the coverage for it they deserve.  Signing this bill would right that wrong.”

Sen. David J. Valesky said: “Firefighters face a higher risk of cancer because of exposure to carcinogens and other toxins while doing their job to protect their communities. After a diagnosis, they shouldn’t have to worry about how to pay for large, out-of-pocket expenses during treatment because of gaps in health insurance coverage. I urge Gov. Cuomo to sign this bill into law to help firefighters who provide a crucial service.”

Assemblyman Bill Magee said: “Volunteer firefighters sometimes encounter dangerous situations and can become exposed to unknown, unseen hazards. As a result, this puts them at a heightened rate of exposure to toxic carcinogens, leading to increased cancer diagnosis rates. We owe it to them to provide presumptive cancer coverage should the need arise, and I urge Governor Cuomo to sign the bill.” 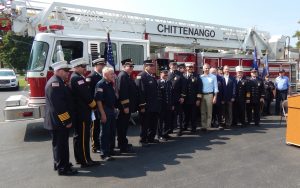 FASNY President Ken Pienkowski said: “Firefighters are more likely to be diagnosed with cancer than members of the general public. Because of this, paid firefighters are granted additional benefits in the event of a cancer diagnosis. Despite facing identical fires, dangers, and cancers, New York’s volunteers have no such benefits. This legislation addresses the “gaps” in existing coverage to ensure that volunteers with cancer receive the support and help they need, while minimizing costs for towns, villages, counties, and fire districts. FASNY is grateful to the entire legislature for unanimously passing these bills. Dozens of other states already have similar benefits in place. The time has come for Governor Cuomo to sign this legislation, and ensure that no firefighter in New York State ever has to face cancer alone.”

Chittenango Volunteer Fire Department Chief Jeff E. Geer said:  “Today’s fires are far more toxic than ever before. Modern homes are filled with an array of synthetic materials like polyester and polyurethane, plastics and electronics that burn faster, hotter and produce a significant amount of carcinogens. Due to this, today’s firefighters are more likely to develop cancer than their predecessors.”