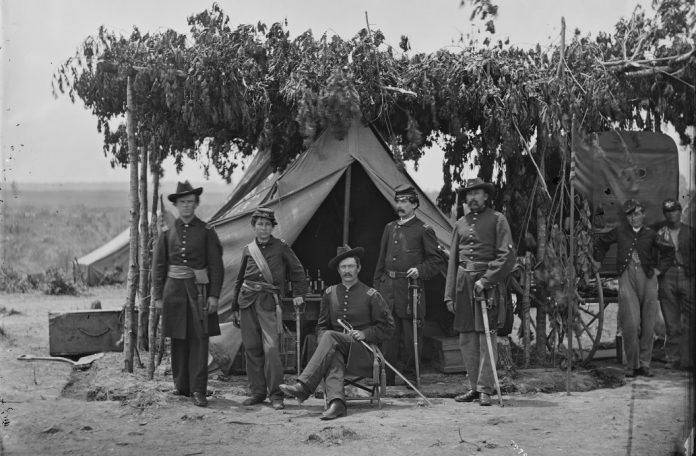 A few of the Jewish soldiers who served during the American Civil War were very young– children by 21st Century standards. They stepped into uniform and performed beyond reasonable expectations. Edmund Zalinski was one such child.

He was born in Kornik, Poland on December 13, 1849, and was an engineer as well as the youngest military Jewish officer in the Union Army. He is credited with numerous artillery-related inventions that influenced modern warfare.

His family came to America in 1853 and settled in Utica, NY before moving to Seneca Falls, NY, where Zalinski’s father worked as a clothier. Edmund attended school in Seneca Falls and upon completion of his studies in 1861, he enrolled in the new high school in Syracuse, one of the very few high schools in existence in the State of New York at the time.

Edmund Zalinski entered the war in November 1864 at the age of fourteen, volunteering as an aide-de-camp to General Nelson A. Miles.

In a letter dated February 11, 1865, Miles wrote to then Massachusetts Senator Henry Wilson: “I have a young friend, Lt. Zalinski, the youngest officer in the Union Army, who has been here since November and is very desirous of obtaining an appointment (at large) to the West Point Academy.”

His papers were presented to the president by the Honorary Isaac Newton, Commissioner of Agriculture. Senator Wilson would later serve as the 18th Vice President of the United States under Ulysses S. Grant from 1873-1875.

Zalinski’s official commission as a 2nd lieutenant came on January 18, 1865, and is attributed to multiple post-war biographical notes to gallantry displayed in action at Hatcher’s Run with General Miles, which is supported by Miles’ letter to Wilson.

Instead of enrolling at West Point, Zalinski enlisted in the Second New York Heavy Artillery, Company “F” on February 23, 1865, at Petersburg, VA. On March 10, 1865, he was detached to General Miles’ staff, rejoining his friend and high-ranking comrade in the field.
It’s one thing to know that someone born in December of 1849, who was fifteen years of age in June of 1865, but another to see a photograph of that someone standing confidently with his fellow officers, some of whom were old enough to be his father, is, to our eyes quite a picture, especially since his is wearing the officer of the daily sash. D e Despite his age he was clearly respected by his comrades. Edmund served beyond the end of the war, honorably mustering out on September 29, 1865.

Commissioned as an Officer in the Regular Army
Edmund Zalinski received his commission as a 2nd lieutenant with the 5th US Artillery on February 23, 1866, after rejoining the regular army. In early April of 1867, Edmund Zalinski wrote from Fort Monroe, Virginia requesting permission to delay his arrival at his next post. His request was approved by General Ulysses S. Grant for 30 days, after which he reported for duty at Key West, Florida.

Yellow Fever Outbreak at Fort Jefferson
The yellow fever outbreak at Fort Jefferson, in the Dry Tortugas, an island off Key West, on September of 1867 was reported in all the major newspapers, with the Key West Herald reporting, “It is estimated that one-tenth of the entire number of soldiers and prisoners on the island have died.” Zalinski went to the fort to fill in for the sick and the dead, and as a result, contracted yellow fever himself.

Dr. Samuel Mudd
Edmund Zalinski was among the survivors when the epidemic abated (although he would suffer from poor health for the rest of his life because of it), and consequently, he was in debt to a most unlikely person for his life, Dr. Samuel Mudd, who was serving out a life sentence at Fort Jefferson for his role in aiding John Wilkes Booth.
Dr. Mudd took the Hippocratic Oath seriously and saved the lives of many of his soldiers and prisoners. Zalinski turned his gratitude into action; he drew up a petition for Mudd’s pardon, which was signed by 300 officers and enlisted men, and submitted to President Andrew Johnson. It stated: “In conclusion, we do, therefore, in consideration of the invaluable services rendered by him during the fatal epidemic—earnestly recommend him to the well-merited clemency of the government and solicit his immediate release from here and restoration to liberty and the bosom of his family.”
His efforts were successful and Mudd was freed. The post surgeon, thought Zalinski needed more than a vacation in the Certificate of Disability he submitted on Zalinski’s behalf, he noted, “I am of the opinion that removal is absolutely necessary for his full recovery and that permanent disability is liable to follow his remaining here”. His request was granted.

Zalinski’s Next Assignments
He served with the US Army at colleges, universities, and military schools as an instructor and as a student. He served as a Professor of Military Science at the Massachusetts Institute of Technology. He was both a student and then an instructor at Fort Monroe, Virginia; and studied Submarine Mining at the Engineer School of Application at Willets Point, NY.
Noted in multiple newspaper accounts as one of the US Army’s top military minds, Zalinski is credited with numerous combat-related inventions, including the pneumatic dynamite torpedo-gun that bears his name, an intrenching tool, a ramrod-bayonet, a telescopic sight for artillery, and a system of range-and position-finding for sea-coast and artillery firing.
In 1887 Zalinski was promoted to captain and from 1890-1894 he traveled abroad to study warfare for the US Army. His studies took him to Russia, China, Japan, and numerous countries in Europe and South America. Upon his return, he retired from active duty but maintained his interest and involvement in artillery and warfare innovations for the rest of his life.

The Zalinski Dynamite Gun
This gun was an off-beat, yet innovative weapon developed and used by the American military around the turn of the century.

Designed by Zalinski, an American artillery officer, the gun used compressed air to hurl a large dynamite charge several miles. Although a technical success, the gun was never popular with the American military establishment and only a few were ever built.
An Ohio schoolteacher by the name of Mefford had invented a pneumatic gun and brought it to Fort Hamilton for trials. Mefford’s device was little more than a toy, and he returned to Ohio without a government contract.

Mefford’s demonstration aroused Zalinski’s interest, and over the next two years, Zalinski built a series of increasingly larger models, improving on Mefford’s design.
In 1885 he demonstrated an operational prototype with an 8-inch bore that could fire a 100-pound charge of dynamite two miles. The gun was more accurate than a contemporary canon and carried a larger explosive charge, though the range was superior.
Zalinski demonstrated this prototype to a large number of visitors, and by 1886 he had interested a number of naval officers in the possibilities of the weapon. The Department of the Navy decided to fund the construction of a “dynamic cruiser”, and investors set up the Pneumatic Dynamite Gun Company in New York to manufacture guns to Zalinski’s design. In 1887 the Navy arranged a test in which the dynamite gun fired a shell that completely destroyed a target ship.

Traveled to Europe
In 1889 and 1890 Zalinski traveled in Europe to study military affairs. He undertook garrison duty at San Francisco, California in 1892 and retired from the army on February 3, 1894.

On April 23, 1904, he was promoted to major on the retired list. He was a companion of the Military Order of the Loyal Legion of the United States—a military society of officers of the union armed forces and their descendants. He was a member of the American Jewish Historical Society.

Edmund Zalinski died March 11, 1909, in New York, NY. He was laid to rest at Mount Hope Cemetery in Rochester, NY in the Zalinski family plot.
The brief overview of his life barely scratches the surface, but like so many of the Jewish immigrant soldiers who served in the Civil War, his contributions to American history are numerous, his bravery worth nothing, and his life worth remembering.