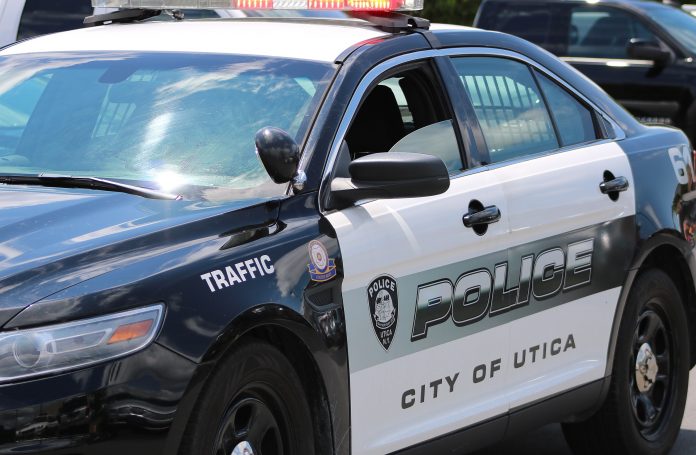 On Sunday August 23rd, at approximately 8:30am, the Utica Police Department responded to a 911 call on the 900 block of Blandina Street.
After Police arrived, a verbal altercation between two residents, Melissa Henderson and Jimmy Spratt, occurred on the sidewalk. Body worn police footage shows Ms. Henderson admitting to stealing a necklace owned by Mr. Spratt.
Sergeant Samuel Geddes, the Supervisor who was later called on-scene, exercised discretion and allowed Ms. Henderson to enter her home to return Mr. Spratt’s necklace, in lieu of charging her with robbery (a felony) for which there was probable cause.
Ms. Henderson entered her home, but failed to return Mr. Spratt’s necklace as she threw a different necklace from her second floor balcony. Ms. Henderson then yelled vulgar and homophobic slurs towards Sergeant Geddes and threw a bag of garbage in the direction of another Utica Policer Officer who was also on scene, almost hitting the Officer.
A verbal altercation continued between Sergeant Geddes and Ms. Henderson in which Sergeant Geddes made inappropriate comments to Ms. Henderson and two teenagers.
After making these comments, Sergeant Geddes proceeded to his police vehicle and obtained a container of pepper spray. Ms. Henderson continued to make homophobic slurs, and Sergeant Geddes subsequently dispensed the pepper spray in the direction of Ms. Henderson and one teenager who was still on the balcony. Sergeant Geddes eventually left the scene.
Body worn footage initially indicates the pepper spray did not make contact with anyone; however, one teenager was treated by the Utica Fire Department due to the exposure of the pepper spray shortly after the incident occurred.
While Ms. Henderson’s remarks were egregious and derogatory, the Utica Police Department does not tolerate nor condone Sergeant Geddes’ language or conduct. Utica Police Officers receive extensive de-escalation training, and there is an expectation, especially for Supervisors, to act in a professional and respectful manner at all times.
Sergeant Geddes reported his use-of-force through the chain of command, consistent with Utica Police Department policies and procedures. During the subsequent use-of-force investigation, policy and procedure violations were noted and brought to the attention of the Administration.
This incident is still under internal administrative investigation, and has been referred to the Oneida County District Attorney’s office for review.
After the Administration reviewed the body worn footage, Sergeant Geddes was immediately suspended without pay and the City will be seeking termination under the collective bargaining agreement.

It is important the public recognizes that when administering discipline, the City of Utica does not discriminate on the basis of sexual orientation, gender, religion, race, domestic violence, military status, and/or other protected characteristics.
The Utica Police Department is accredited by the New York State Division of Criminal Justice Services (DCJS) and takes pride in being a professional and transparent police agency that holds its employees accountable.ig@mac.com, 315-601-1919