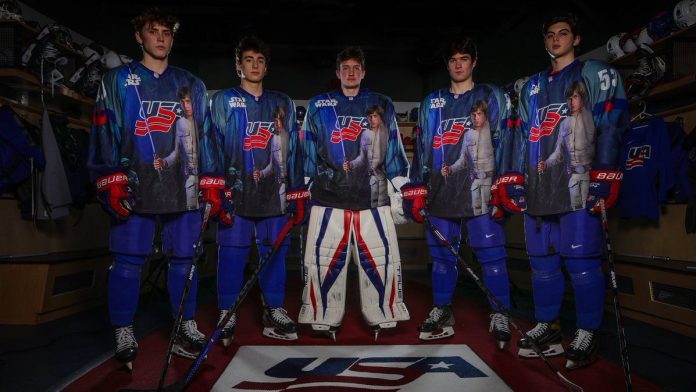 The USA Hockey National Team Development Program’s under-17 squad will wear “Star Wars” inspired jerseys for their game against the Madison Capitols on Friday night in Plymouth, Michigan. It will be the team’s eighth annual “Star Wars” night.

The front depicts Luke Skywalker holding a lightsaber next to Yoda in a scene from “Episode V: The Empire Strikes Back.” The back shows Skywalker in his pilot gear with R2-D2, staring at his X-Wing Fighter as it sinks in the Dagobah swamp.

After seeking a Jedi’s focus in their game at USA Hockey Arena, the team will auction off the “Star Wars” threads to benefit C.S. Mott Children’s Hospital in Ann Arbor.

The Force was so strong in USA Hockey’s jerseys that even Skywalker himself was impressed.

Actor Mark Hamill, who starred as Skywalker, helped spread the word about the auction by reposting the apparel to his 4.8 million followers on Twitter.

Many thanks to @USAHockeyNTDP. This is the closest I’ll ever get to being on a hockey team. 🙏👍🏒🏑 https://t.co/JXiZYMtx38

“This is the closest I’ll ever get to being on a hockey team,” tweeted Hamill. “Now I can truthfully say I’m actually ‘on’ a US Hockey team.”