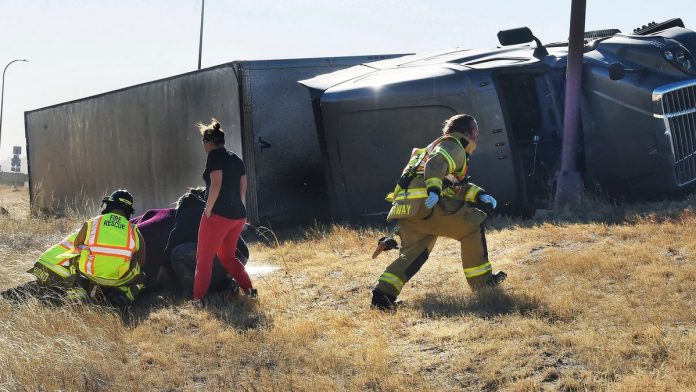 A wild weather day was underway Wednesday across the central U.S., with howling winds, severe storms, tornadoes and even wildfires slamming the region.

Damaging winds have brought down trees and power lines, making widespread power outages possible, the National Weather Service warned. The winds will also be strong enough to kick up dust and raise the risk of wildfire ignition and rapid spread in some areas, AccuWeather said.

Portions of Oklahoma’s panhandle were evacuated Wednesday afternoon and all lanes of U.S. Highway 287 closed down due to extreme winds as crews battled wildfires, and parts of Texas’ panhandle saw at least four active wildfires accelerated by the strong winds.

The Weather Service has issued a high wind warning along a swath stretching from New Mexico to upper Michigan – including Wisconsin and Illinois – with sustained winds between 25 mph and 40 mph expected.It also issued severe thunderstorm warnings for parts of Iowa, Kansas, and Nebraska.

Multiple tornadoes have already touched down in Iowa. In all, some 36 million people were under high wind warnings as of midday Wednesday. Several airlines later decided not to chance landings at the Des Moines International Airport, as an epic line of thunderstorms approached from the west. In Kansas City, Missouri, part of the roof at its downtown airport collapsed and traffic controllers had to evacuate from the tower cab.

What is going on with the weather?: Tackle deep climate issues and current events with the Climate Point newsletter

Multiple highways closed down in Kansas, where high winds and dust storms caused brownout conditions and reduced road visibility. The high winds, which reached 100 mph in some areas, blew roofs off houses and toppled semitrailers.

And over 166,000 Kansas homes and businesses served by Evergy, the state’s largest electrical company, were without power as of 4 p.m. Wednesday, the company reported on an online outage map it maintains.

Already Wednesday, a gust of 107 mph was reported in Lamar, Colorado. The Colorado Springs Fire Department said on Twitter that they had received 635 calls for service within five hours — including one about the roof being blown off their own headquarters.

A Weather Service forecast office in Nebraska warned that “travel will be difficult, especially for high-profile vehicles. Trucks may be blown over. Holiday decorations will be damaged or blown away.”

Some schools in Nebraska canceled in-person classes and dozens of schools in Iowa planned to close early Wednesday in anticipation of bad weather. Iowa State University in Ames, Iowa, shut down at noon due to the storm threat.

At this time of year officers in Iowa are used to warning people to stay off the roads because of snowstorms, not thunderstorms, said Polk County Sheriff’s Lt. Ryan Evans.

Allan Curtis, a meteorologist with the National Weather Service in Des Moines, Iowa, said Wednesday’s storm line would “raise eyebrows” even if it happened in the summer, he said.

“We don’t have a lot to compare it to,” Curtis said. “It’s really one of a kind for this state or this area for this time of year.”

Des Moines police said on Twitter that no significant damage, injuries, or road closures had been reported yet as of Wednesday evening.

Workers were instructed to take shelter: What role did cell phones play for warehouse workers in last week’s deadly tornadoes?

Denver International Airport had over 100 flight cancellations and 288 delays due to the high winds.

There is also the chance for severe thunderstorms and tornadoes into Wednesday night: “Severe storms are expected across southeast Minnesota, west-central Wisconsin, and Iowa this afternoon and evening,” the Storm Prediction Center said.  “Widespread damaging wind gusts (80+ mph) and a few tornadoes (some strong) are likely.”

A tornado watch was in effect for portions of Kansas, Nebraska, Missouri, Iowa and Minnesota.

Ottumwa, Iowa, soared to 75 degrees on Wednesday, which was a state record high for the month of December.

The weather across the central states followed a powerful storm on Monday and Tuesday that socked drought-stricken California with heavy rain at lower levels and up to 6 feet of snow at some higher elevations.