The Face of Genius-By Theresa Mancuso 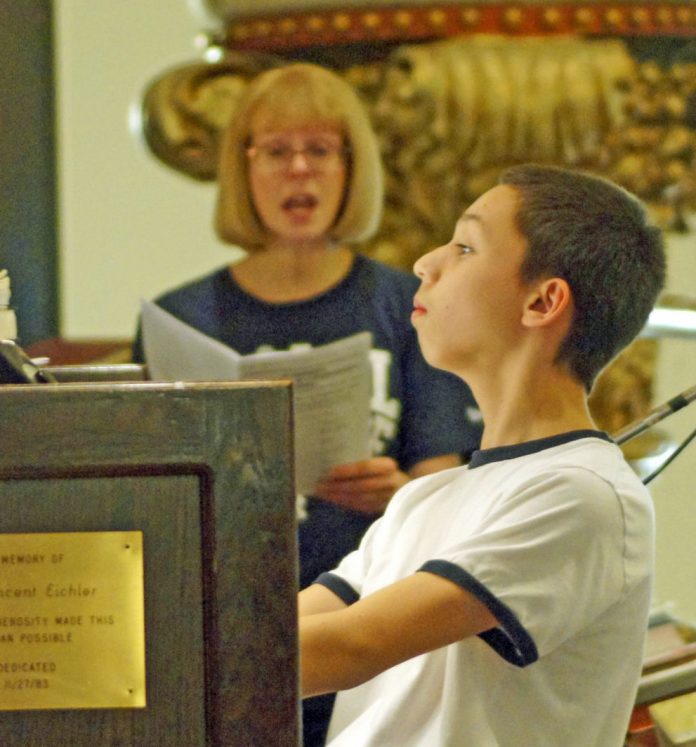 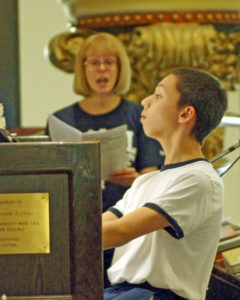 From the choir loft of St. Joseph’s in Utica, the larger than life size statues of angels and saints look over the congregation. With beautifully ornate stained glass windows, walls of heavenly paintings and perfectly pitched arched ceilings inlay a perfect backdrop for the inspired hallowed music of, Dominic Fiacco.

Dominic a seemingly normal 12-year-old boy, who likes to collect coins and shows interest in model trains-is anything but. The son of Pamela and William Fiacco of Poland, NY is the eldest of six children. He began studying organ at the age of 8 years old under the instruction of teacher Steven Best at the First Presbyterian Church in Utica and piano, under Sar-Shalom Strong. Mr. Best met Dominic and his family after having attended an organ recital at First Presbyterian Church given by Maria Rabbia, who was then a senior in high school.

According to Best, the Fiacco family wanted a closer look at the organ and he asked if any of the youngsters could play? Dominic who had some piano lessons sat down and to his surprise played a piano version of Bach’s ‘Jesu, Joy of Man’s Desiring.’ Best said, “He played it very well.” They then began having some fun experimenting with the many sounds of the organ and Dominic was intrigued. 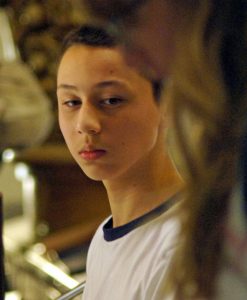 After their fun interlude, the Fiacco’s asked Best if he would be willing to teach Dominic the organ.  Best hesitated, while although he had taught organ for 40+ years none of his prior students had been Dominic’s age. Best said, “He wasn’t big enough to even reach the pedals and I didn’t know what to do but I decided to give it a try.”

Dominic mastered the basic elements of Best’s organ teaching quickly. As he grew and could reach the pedals new pieces of music were introduced with few pedal notes. While there was no set curriculum Best noticed that Dominic loved taking on challenges and was excited when surprising him with the speed of his progress.

By the time Dominic reached the age of 11 it was fully realized that he was an extraordinarily gifted young person and began playing pieces most organists wouldn’t attempt until they were at least in late high school.  Then something happened, it is as if God’s light began radiating from Dominic’s fingers. He began playing compositions that only professionals would play. All that heard him were stunned in disbelief.  Best stated, “Not only was he showing unbelievable technical control of some of the most demanding pieces by the greatest French composers — especially Vierne, Dupré, and Widor — he’s playing with such depth of understanding and musical involvement that it’s as if he’s putting decades of living and understanding behind every note!  “How can a kid do this; I kept asking myself!””

Dominic’s lessons are like few Best has ever experienced. When suggestions are given Dominic automatically remembers it and applies it to future pieces. Determined with a gleam in his eye, Dominic always chooses the most difficult piece when given a selection.  Yet whatever he does it is always done with humility and grace.  Best continued to say, Dominic can masterfully play a piece and when complemented will just say,  “Thank you, but it can be better.” 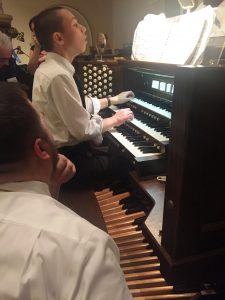 He typically goes back to one obscure measure, pointing out a couple of notes that were uneven or not shaped quite right, then works until they are corrected. While he practices three hours daily, this is not practice but rather a labor of love. The music and Dominic are one.

Currently, Dominic is the assistant organist at St. Joseph-St Patrick’s Roman Catholic Church, in Utica.  He has been invited to perform at the largest Cathedral in the United States,  (Episcopal) Cathedral of St. John the Divine in New York, on May 13th at 5:00 pm as part of their recital series for 2017-2018… This invitation came about after the cathedral’s music director saw a music video of him at https://tinyurl.com/yafot7ec.

In addition when asked about Dominic’s future Best replied, “I am often asked this question and my answer is he has many choices, after all, he is only 12. My task is to give him the best training I can, keep him from being overwhelmed by too many opportunities, and help be sure he still has time to be a kid, while encouraging him to continue on the fantastic journey he has just begun, even though it seems as if he’s way ahead of most of us already.”

Most recently Dominic performed at the Sacred Music Monday Night Concert at St. Joseph’s and St. Patrick’s Church. He performed a stunning rendition of Maurice Ravel’s Sonatine: III Anime’ on the grand piano. His mother was his page turner. He later soloed the Toccata in F Major by Johann Sebastian Bach, on the organ. This is a piece in which the foot pedals are engaged. He performed it flawlessly. 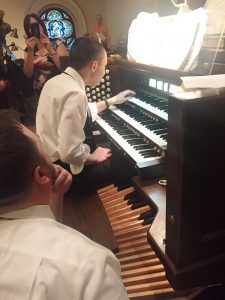 Dominic accompanied the church choir in How Lovely is Thy Dwelling Place by Johannes Brahms and ended with the Hallelujah chorus from George Frideric Handel’s Messiah.

Brother Andrew Siuta, choir director, and church organist says of Dominic, “ It’s great having him.  His gift is definitely a gift to us.  While he’s great at solo compositions, he’s really becoming proficient at accompanying the choir.  That allows me to sing with the only other bass, and allows the choir to expand their repertoire.”

Our community will certainly see and hear more from this talented young man. Dominic means, of the Lord, and his gift of music truly is.