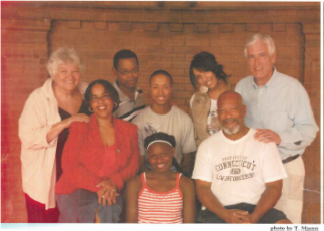 The Mohawk Valley bid farewell to Richard Enders April 19 at Historic Old St. John’s Church. He will be remembered as former DA of Oneida County throughout the 1970’s and his Clinton law practice until his retirement in 2014. Enders will also be remembered for his considerable acting abilities. For 28 years he starred as the lead character in the Players of Utica’s Scrooge, he wrote and performed a one man show, “Charles Dickens – Sketches of Boz” which he eventually played off Broadway in 2000 and for many years was the host of the weekly “Mohawk Valley Living.” What many will also recall is Ender’s performance as the Wizard in For The Good’s 2008 production of The Wonderful Wizard of Was. Here he is seen with the cast in the official promotional photo. RIP Richard.