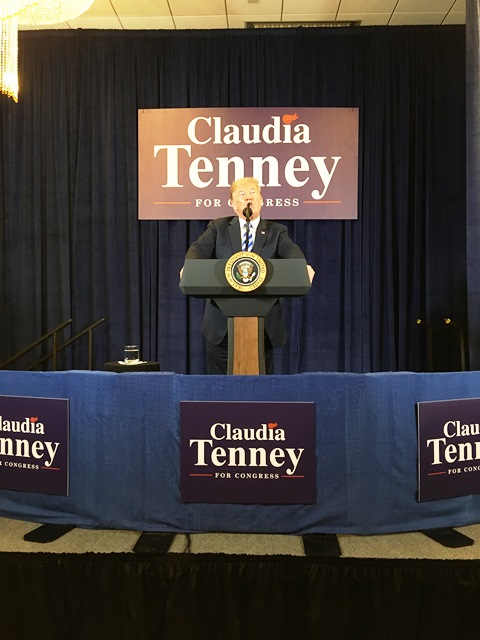 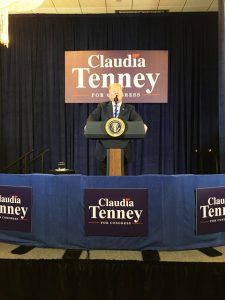 The President of the United States was a guest in the Mohawk Valley this past week. This is the first time a sitting US President has visited our area since Truman visited 70 years ago. POTUS was in town to support the re-election of Congresswoman Claudia Tenney. A fundraiser on her behalf was held at the Hotel Utica after the President arrived by motorcade from Griffiss Airbase where he landed from Air Force One. His stop in Utica was preceded by a trip to Fort Drum to sign into law the John S. McCain National Defense Authorization Act. The legislation, named in honor of Senate Armed Services Committee Chairman John McCain (R-AZ), supports $716 billion in funding for national defense for the fiscal year 2019 and provides America’s service members the training, resources, and equipment they need. More on page 10.
Photo courtesy of Jim Brock

Chairman McCain released the following statement :
“I’m very proud that the National Defense Authorization Act for Fiscal Year 2019 has been signed into law. Today’s bill signing completes the historically quick process by which the NDAA has become law, and will help deliver our service members the resources they need to rise to the challenges of a dangerous world. I thank my colleagues in Congress for working together to craft this legislation, which honors our men and women in uniform and lives up to the traditions of bipartisanship and collaboration that have come to define the NDAA process.

“This year’s NDAA represents an important opportunity to implement an effective approach to confront a growing array of threats. The administration’s National Defense Strategy outlined a framework for identifying and prioritizing these threats. Through the NDAA, Congress is fulfilling its duty to help translate that strategy into policy and align resources to implement it.

“Finally, I’m humbled that my colleagues in Congress chose to designate this bill in my name. Serving as Chairman of the Senate Armed Services Committee and working on behalf of America’s brave service members has been one of the greatest honors of my life. I’m proud that throughout my tenure, the committee has led with a spirit of comity and cooperation to provide for America’s Armed Forces. There is no higher calling than to serve a cause greater than self-interest. Through the committee’s work, I’ve been privileged to support our men and women in uniform who have dedicated their lives to that noble cause.”