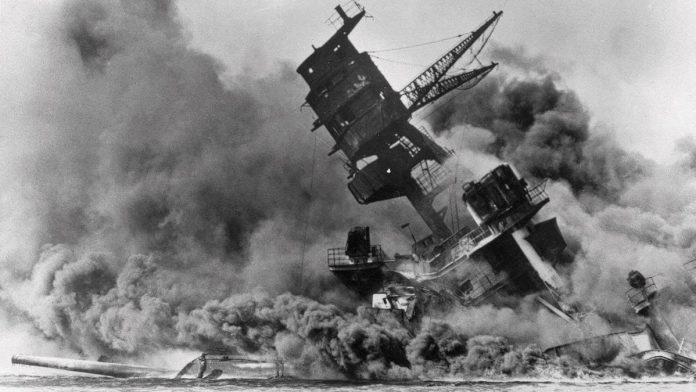 President Roosevelt made handwritten modifications to the dictated and typewritten first draft of his Declaration of War against Japan.

Eighty years ago, 6-year-old Dorinda Makanaonalani Nicholson sat down to a Sunday morning breakfast at home on Hawaii’s Pan American air base when the walls began to shake.

She remembers her dad, a civilian, remarking how strange it was for the Army and Navy to engage in practice flights on a Sunday. They ran outside and saw Japanese torpedo bombers skimming the tops of trees along Pearl Harbor.

“I could see the pilots. They were that low and close,” Nicholson, 86, told USA TODAY. “I didn’t know at the time they were torpedo planes.”

Soon, the walls of Nicholson’s family’s kitchen would have bullets in them. There would be shrapnel in her front yard.

Fact Check: Armed citizens are not what stopped Japan from invading after Pearl Harbor

She still carries a bullet that was lodged into the wall telephone as a memento.

“You need to know your history,” she said.

Tuesday marks eight decades since the shocking attack on Pearl Harbor. The date that changed the course of a nation will be marked by about 35 military survivors who plan to gather at multiple events.

When hundreds of Japanese planes bombed American service members and civilians on U.S. soil on Dec. 7, 1941 – killing more than 2,400 – America was an “isolated, quiet, withdrawn” nation said Craig Nelson, author of the 2016 book “Pearl Harbor: From Infamy to Greatness.”

The events of that day, dubbed “a date which will live in infamy” by then-President Franklin D. Roosevelt, launched America’s involvement in World War II, beginning decades of growing global U.S. influence.

The date will be observed at Hawaii’s Pearl Harbor National Memorial with multiple events, including a ceremony for the 429 USS Oklahoma crew members killed in the attack.

Each year, the National Memorial marks Pearl Harbor Remembrance Day by commemorating how “December 7 was a catalyst that led to a changed world.” This year, the memorial is focusing on the “long and difficult road to peace” and highlighting “the importance of the peace that brought reconciliation,” according to its website.

Ceremonies this week will be the first in-person events to commemorate Pearl Harbor since the start of the COVID-19 pandemic. The National Park Service said it’s trying to minimize veterans’ potential exposure to the coronavirus. This year, masks are required in all areas regardless of vaccination status, including when social distance is maintained.

“This year is not going to be as big as years in the past,” National Park Service program specialist Emily Pruett told USA TODAY.

Even with yearly memorials, collective understanding of Pearl Harbor is slipping, Nelson said. In 2021, most Americans probably don’t realize how large a shift the attack prompted in culture and society for the individual American, Nelson said.

“If you lived before Pearl Harbor, you would feel more comfortable going back to the Revolutionary War era than you would moving to the era now,” Nelson said.

The attack on Pearl Harbor caused Americans to “pull together” to fight fascism, Nelson said. Later, in the Cold War, the country waged a global fight against communism. Most recently, the wars in Iraq and Afghanistan further expanded the U.S. military’s global reach.

But Nelson and Nicholson said the nation’s collective memory of Pearl Harbor and the impact of World War II is fading.

“One solider that died represents a mom, and a dad and a sibling back home,” Nicholson said. “I want people to not forget what’s happening with those left behind.”

She said people were stunned at the bombing of Pearl Harbor in 1941 – the same way Americans were shocked and overwhelmed by the 9/11 attacks nearly 60 years later.

But the aftermath of Pearl Harbor is what Nicholson remembers most: hiding at Waipahu sugar plantation, martial law in Hawaii and her family being unable to return to their house on the Waipi’o Peninsula because of the risk of undetonated bombs.

In three decades of work cataloguing the stories of Pearl Harbor, Nicholson said she wants people to reconsider the lives of everyone affected by war, including women and children and civilians whose stories she said are more likely to be forgotten.

“I want people to know that war affects everyone,” Nicholson said.