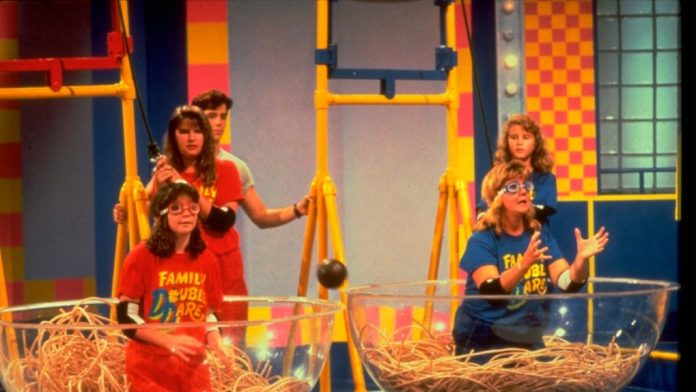 (SYRACUSE, NY)- Charlie Blum Entertainment / CB Entertainment, Red Tail
Productions LLC, in partnership with Nickelodeon, are happy, and a bit sad, to announce that the show’s legendary host, Marc Summers, will be saying goodbye to the live tour. The end of this year will mark the conclusion of thousands of pies, numerous chocolate-covered chickens and of course, tons of slime! Following the 2019 national tour dates, Marc will say farewell to Double Dare Live.

Marc Summers summed it up by saying, “Going out on top has always been my goal. I was able to revive the program, both on television and in theaters across the country. Double Dare has been a once in a lifetime experience. For over 30 years, I have had an amazing time entertaining a couple of generations. It’s always been important to me to know when to say farewell, and I believe now is that time. But this is not retirement! I have a new show launching on Discovery, a live one man show, a documentary on my
life, and a few other tricks up my sleeve!”

“I want to thank my extremely loyal fan base who first discovered me on Double Dare, followed me over to What Would You Do? and continue to follow me in my career and on social media.”

Double Dare premiered on Oct. 6, 1986, on Nickelodeon, and ran from 1986-1993, making it the network’s longest-running game show. Marc Summers served as the show’s original host from 1986-1993. Shortly after its debut, Double Dare became one of the most popular original daily programs on cable television. The series went into syndication in 1988 and was later revived as Super Sloppy Double Dare in 1989. The show also ran on broadcast television as Family Double Dare in 1988, followed by new versions on Nick, including Double Dare 2000. Nickelodeon launched a successful revival of the show in the summer of 2018 to the great acclaim of the original super fans and a whole new generation of kids.
All new Double Dare episodes will air on Nickelodeon in October and December of this year.

One of the tour producers Charlie Blum said, “It has been a total joy connecting our live audiences across the country with their TV hero Marc Summers while touring Double Dare Live. His command of the audience and the messiest game show on tour is mind-boggling and he will be sorely missed.”

Focused on producing and presenting only the best in live entertainment in venues across North America and internationally, Red Tail Entertainment began presenting a limited number of concerts in 2013 as 35 Concerts and has grown into a formidable boutique company specializing in all facets of the live entertainment experience -promotion, production, marketing, and general management. Headquartered in Fort Worth, Texas, Red Tail has established itself as one of the industry’s Top 100 presenters with sold out engagements for The Beach Boys, Tony Bennet, Harry Connick, Jr., Steve Martin & Martin Short, The Wild Kratts, Daniel Tiger’s Neighborhood, Hip Hop Nutcracker, Cirque Dreams, and many more. The company has continued to expand and grow, becoming a leader in producing unique live events using international talent. In addition to Dolly Parton’s Smoky Mountain Christmas Carol, the company produces tours of Double Dare Live! With Marc Summers (touring North America in Fall 2019), Erth’s Dinosaur Zoo Live, which just closed a three-month residency at the Smithsonian National Zoo in Washington, D.C., Erth’s Prehistoric Aquarium Adventure (currently touring North America), The 420 Experience, a
celebration of cannabis culture in music and lasers opening in Loveland, Colo., on April 20, 2020, Scooby-Doo! Live Musical Mysteries, and A Night With Janis Joplin on Broadway. As audiences change and new artists emerge – Red Tail Entertainment will continue to soar. For more information, visit http://www.redtailentertainment.com.