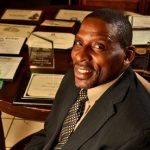 Samuel “Sam” Rowser, executive director of On Point for College, will deliver the keynote address at Mohawk Valley Community College’s Commencement ceremony, which will be held at 4 p.m. Friday, May 11, at the Adirondack Bank Center at the Utica Memorial Auditorium, 400 Oriskany St. W., in downtown Utica.

Rowser, of Syracuse, has spent nearly 30 years being a mentor to first-generation college students, helping them to start college, earn degrees, and gain employment. He embodies the organization’s mission: To develop the programs and cultivate the relationships to change the lives of traditional and non-traditional, 17- to 29-year-old students by breaking down barriers through access to training, college, and careers for success in life. On Point for College, a non-profit program, has helped more than 7,600 inner-city youth from Syracuse, Utica, and New York City enroll and succeed in college. The students are often the first members of their family to go to college.

Helping underserved youth earn college degrees has become Rowser’s life’s work. From 3 a.m. trips to New York City to transport students to and from college, and advocacy on behalf of students, his tireless work has changed the lives of thousands of people who never thought college was a possibility. Rowser also was instrumental in the training of On Point’s New York City partners and the replication of On Point for College in the city of Utica.

Rowser earned an A.S. in business administration from Onondaga Community College, and a B.S. in interdisciplinary studies with a minor in psychology and an M.B.A. from Columbia College. Before joining On Point for College, he was an admissions counselor with Onondaga Community College and a career development specialist at Southwest Community Center. Rowser is a veteran who has served with the Marine Corp, and a husband and father of seven. He was one of the few invited to shake President Barack Obama’s hand at his 2013 talk about college affordability at Syracuse’s Henninger High School, the ultimate recognition for the work he has done to get thousands into college.