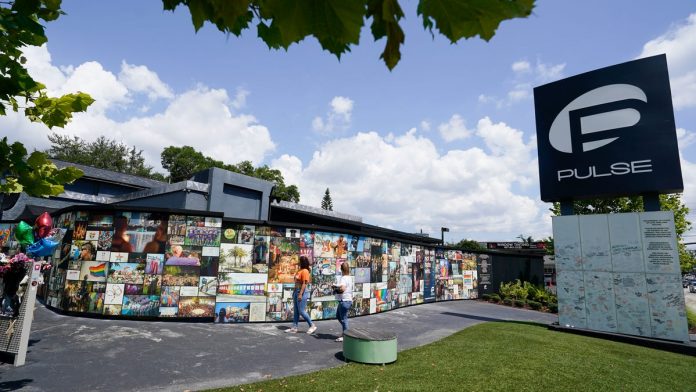 Pulse nightclub was transformed into a memorial after the 2016 mass shooting in Orlando, Florida.

A man was arrested Tuesday after being caught on camera setting a small fire to several banners at a memorial for the Pulse nightclub mass shooting victims, authorities said.

The incident happened last month in Orlando outside Pulse nightclub, which since the 2016 mass shooting at the LGBT venue has been transformed into a memorial for the 49 people who perished.

Footage posted on Facebook by the onePULSE Foundation, a non-profit formed after the attack, shows a person in a wheelchair rolling up to a large memorial that wraps around the club and lighting part of it on fire, though damage was minimal and the blaze was contained to several memorial banners at the site.

The onePulse Foundation said the incident happened sometime around 8:30 p.m. on Oct. 12. The video shows the person, who is wearing a baseball hat, rolling up to memorial — which features a large photo wall with banners and names of the victims — and lighting a small fire before leaving. The fire mostly went out on its own but a passerby stomped out the remaining embers, the video shows.

In the aftermath of the 2016 attack, the gay nightclub was transformed into a memorial and gathering point for the community, survivors and family of those killed. The memorial includes a wall of photos, banners and rainbow lights that wrap around the gray-concrete nightclub showing the 49 victims and other images from the community’s response to the attack. Those in the community often leave flowers, candles and balloons at the site.

Three banners were burned along with other items left at the memorial, but damage was minimal and the wall remained intact.

The attack on the club in the early morning hours of June 12, 2016, was the nation’s deadliest mass shooting until a gunman killed 60 people at a country music festival in Las Vegas a year later.

More: Read about the 49 victims

Earlier this year, President Joe Biden signed a law designating the nightclub as a national memorial. The law was part of an effort to build a permanent memorial at the site in honor of those killed by Omar Mateen, who was armed with an AR-15-style assault rifle. Plans for the site include a reflecting pool, an open-air museum and an education center with gardens and a public plaza.

Facebook
Twitter
Previous article
Gaige Grosskreutz, shot by Kyle Rittenhouse, testifies at trial: ‘(I)
Next article
Duchess of Sussex apologises to court for forgetting she authorised