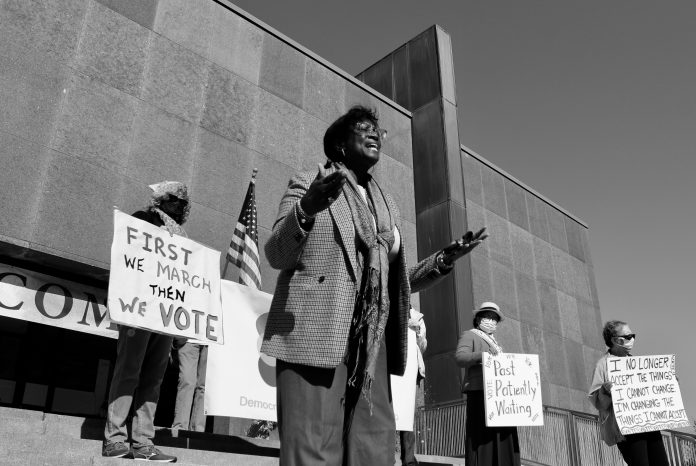 Saturday in Utica, Indivisible Mohawk Valley (an organization dedicated towards minority representation) held a rally to encourage women to vote in this year’s election. They were joined by 1199 SEIU (Labor Union), WYCA (Civil Advocacy Group), and the Mohawk Valley Latino Association. This was part of a greater effort taking place nationally. On the same day, all over the country, women were taking to the streets to demonstrate the importance of voting. This is being called the Women’s March 2020, inspired by the international march that took place after Trump’s inauguration in 2017. While Indivisible Mohawk said that this was simply to encourage voting (something both Republicans and Democrats can agree on) and that they care more about you voting than who you’re voting for, the crowd was decidedly pro-democrat.

Jill Farnham, an Indivisible Mohawk Valley organizer had this to say,

Farnham: “[The present groups] are gathered here today to remind all of us, to empower us, that one week from today we start voting early, and to remember that in 2016 53% of eligible women voters stayed home. Not happening again. We’re voting.”

Phoenix: I imagine most of you come down more on the Democratic side than the Republican side. Is that the mission of this?

Phoenix: What would you say to people who don’t vote?

Farnham: “Whatever you do, don’t complain. I don’t wanna hear a word outta ya on November the 4th if you didn’t vote by November the 3rd.” 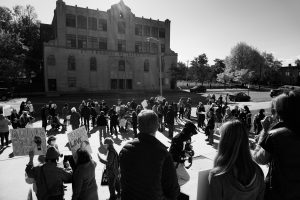 Over 100 people rallied at Oneida Sqaure where local Black activist Freddie Hamilton gave a speech to commence a short march to the steps of Munson Williams. At MW, several other speakers implored the crowd to vote.

The organizers and speakers repeatedly brought up the fact that 2020 is the 100th anniversary of the 19th amendment (women’s right to vote) being ratified. In fact, the Suffragettes movement for women’s right to vote is the very reason Indivisible chose to march to MW. Currently at MW, there is a Suffragettes exhibit featuring works from MW’s collection and from MW faculty. 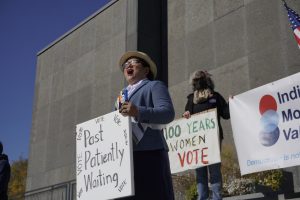 A statement on Munson Williams website explains the connection between art and the early women’s liberation movement, “During the 1800s, social mores banned women from attending public art schools so they found creative pursuits appropriate to their largely homebound circumstances. The works of art on view dating from this period demonstrate the various ways in which women transformed the materials and subjects available to them into works of art. These creative practices historically have been dismissed as minor. But quilting, watercolors, or silhouettes were all important means of artistic expression for women who had no access to the education or materials required for fine art. Leaping ahead in time to the 1970s, feminist artists embraced traditional women’s art, such as china painting or needlecrafts, and celebrated them as worthy counterparts to painting and sculpture.”

One of the more notable speakers was the director of the Mohawk Valley Latino Association (MVLA), Sonia Martinez. On the steps of the Art Institute she said, “Ten decades of our right to vote. The 19th amendment, ratification to the constitution giving women citizenship and the right to vote. As an immigrant, I came here to live the American dream because my father knew that I could not have the opportunities in my own country as a woman. The Women Suffragettes had many problems along the way, and today we need to continue those in that journey. For our daughters, granddaughters, sisters, wives, grandmothers, aunts, cousins. All women leaders of our future. Vote early, absent, and on November 3rd vote. Let’s continue this journey for the women from 100 years ago.”

Her speech was well received and as she departed the steps, someone shouted “Martinez for congress!” which was followed by the entire crowd cheering. So, perhaps we’ll be seeing much more of Sonia Martinez in the future.

Despite the vitriol of the many speakers at today’s rally, the question of how well their message was received can only be answered on November 4th.