Kyrie’s antics can be funny when they’re not dangerous 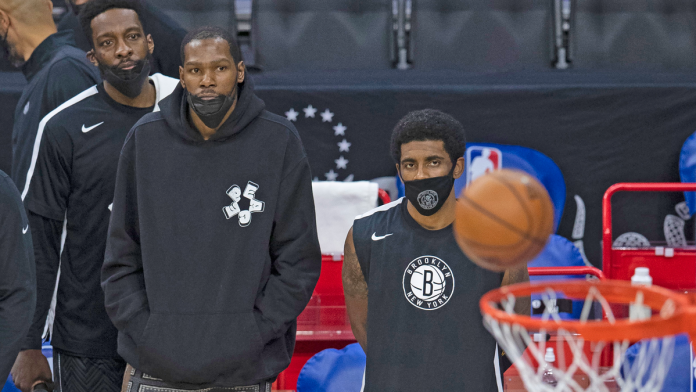 There’s not enough sage in the world to burn in order to cleanse the vibes of Kyrie Irving’s takes on science.

The NBA’s resident globe truther, henceforth known as World B. Flat, tweeted on Wednesday morning, “My mask is off. Now take yours off. No fear.”

How about just… no?

America’s COVID-19 death toll has already surpassed the populations of Wyoming and then Vermont, and is on track to go over the District of Columbia’s 689,545 by the end of the month. Even among those who aren’t so selfish as to refuse vaccination, anyone living with children under 12 still needs to behave with as much caution as possible to not bring the virus into their home, while also hoping the kiddos don’t catch it at school. And the delta variant is impacting kids more than the initial wave of coronavirus did.

As if to highlight how stupid Irving’s plan for immediate demasking is, less than two hours later, Governor Kathy Hochul announced new mask mandates in New York for anyone at state-licensed child care facilities to go along with the existing rules for schools.

If Irving doesn’t like that in the place where he plays these days with the Nets, he can go to… well, he can’t go to Iowa, because around the same time, a federal judge blocked the school mask mandate ban that had been passed by the legislature in the Hawkeye State.

The resistance to masks is even more baffling than people refusing the vaccine, because at least you could possibly fathom why some people’s health might worry them about long-term effects from the shot. Granted, the long-term effects of COVID-19 are no great shakes, either, but at least there are some grounds for being concerned.

Wearing a mask? It’s a simple piece of cloth over your nose and mouth to prevent you from spreading — even if you’re vaccinated, you can get and spread it — a disease that has killed 1 in 500 Americans. There is no argument against it. It’s not about “fear,” but about taking necessary precautions that are proven to work.

Irving’s flat earth nonsense was at least funny. This time, his stupidity is dangerous.