Kyrie is an agenda whether he likes it or not 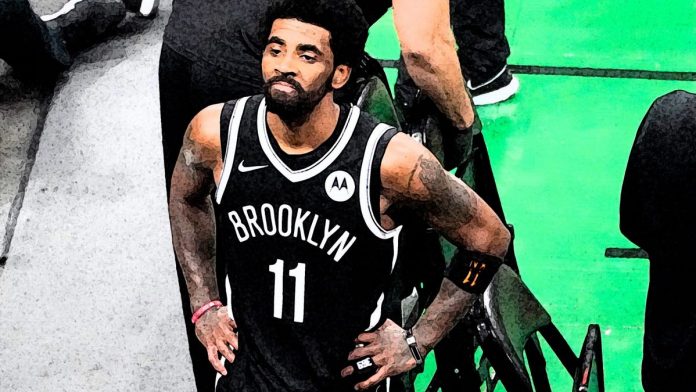 Some great company Kyrie is in these days.Image: AP

It’s not that Kyrie Irving is wrong about everything, because he’s been right in the past. And he’s done good things. It’s just that he likes to huff his own farts. And when you’re someone who likes to huff your own farts, two things happen. A) You’re bound to do and say some pretty dumb stuff to prove how sweet your farts smell and how right they are and B) it’s unclear what the reasoning behind the good things you did really were. It’s still good they got done, but it starts to feel like they were just done to call attention to yourself.

Kyrie went on Instagram last night to justify his moon-brained position of not getting vaccinated, and there’s little I can add to this:

Is that really where you want to be, Kyrie? This is a collection of people who merely stand apart from logic, reason, and decency only to stand apart from logic, reason, and decency. There’s no other goal than that. But then again, that might be Kyrie’s only goal, too, to stand out. There is no overarching ethos at work. It’s just being a petulant child for the sake of proving that you can be a petulant child.

I don’t know who these people are that Kyrie hears about losing their jobs due to not wanting to take a safe and free vaccine that helps keep us all safer, but the only ones I hear about are cops. Y’know, the people Kyrie wanted to cancel the playoff bubble in 2020 over to protest and work against. So how does this all line up, exactly?

Kyrie claims he’s not hurting anybody. But he is. It can be as micro as his teammates in a quest to win a championship, or as macro as anyone he interacts with while he’s not vaccinated. Maybe it’s minuscule, maybe not enough for him to care, but it’s there. We tried letting people just get it themselves, because we assumed for our stupid rational and logical reasons that people wanted the pandemic to be over. That didn’t work. We tried bribing people. That didn’t work. So all that’s left is to force people in the ways we can, which is in the workplace and threatening livelihoods. Carrot, stick, all that.

TNT debuted its hockey coverage last night, an evening after ESPN did so. I don’t know what it is, but everything looks brighter on TNT. That goes for their NBA coverage, and even AEW. It helps the white surface of a hockey rink really pop. When they get some better jerseys to display it’s going to be awesome.

That said, there wasn’t too much new about anything they did either. Unless we count Wayne Gretzky’s dye job that made him look like he just walked off the set of “Battle Of The Network Stars.” They added a penalty timer imposed on the ice during power plays which was cool. They had a shot counter on the scorebug which ESPN didn’t. All pluses.

But it sounded just about the same as we’re used to. Most of the personalities on TV are ones that we heard on NBC, and those that weren’t provided zilch. At the conclusion of the Rangers-Capitals game, we had Rick Tocchet saying he would have liked to have seen Ryan Reaves run some anonymous Capital because the Rangers got their ass whooped. Gee, can’t figure out why Tocchet’s stint as coach in Arizona ended up with everyone’s dick in the dirt.

We also had Gretzky being brought in during the Caps-Rangers game and having to stumble while two goals were scored and they were talking about pretty much nothing. Unless you count Eddie Olczyk hotly reminding Gretzky and everyone else that they played in the league at the same time. No one cares what player Gretzky thinks Ovechkin reminds him of from 35 fucking years ago. And yes Eddie, a very small sliver of us remember that you and Wayne played at the same time, because the images of those Oilers turning your Hawks into a used sponge are burned into our psyches. But no one else cares.

It’s only one night, and there’s plenty of time to work out the kinks. God knows there’s enough of them.