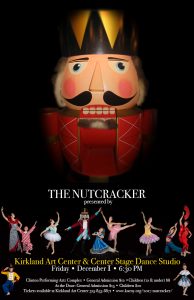 Clinton, NY – Kirkland Art Center announces the Annual Christmas Production of The Nutcracker, a classical ballet in two acts, based on a story by E.T.A. Hoffman. Performance will take place on Friday, December 1, at 6:30 p.m. at the lovely Clinton Performing Arts Complex, and not only offers the community a window into the world of classical dance, but features the work of local artists such as Cathy Marsh’s magnificent paintings, reaching 50′ X 25′ on a fully dressed stage, the work of local choreographers and re-staging of the classic Pas de Deux in the Act II.  From the youngest members making their performing debut to the distinguished technique and artistry of the guest artist, it is the performance sure to inspire.

The version of Hoffman’s Nutcracker follows the journey of young Maria who receives a nutcracker as a gift at a Christmas Eve party from her godfather, Drosselmeyer. She encounters the frightful Mouse King before embarking on a wondrous journey with her handsome prince through the Land of Snow and the Kingdom of Sweets.

Dancing the feature roles are Victoria Maier of Clinton, NY as Maria; Mac Spadea of Clinton, NY as Fritz; Alexander Alexandrov of Sofia, Bulgaria as the Nutcracker Prince; Randy Fields of Utica as the Godfather; Emma Simpson of Deerfield, NY as the Sugar Plum Fairy; Marina Marcus of Clinton, NY as the Snow Fairy;  and Abigail Wratten of Oriskany Falls, NY as Dew Drop Fairy; Dora Ammerman from Hamilton, NY as Peppermint; Noelle Pape of West Winfield as Seniorita; Bella Starsiak of Deerfield, NY as lead Chinese dancer; Angela Martino of Clinton as Mdm. Mouserinks. In addition, special appearances will be made by Clinton Central School Superintendent Dr. Steven Grimm and his wife, Miquel, Elementary School Principal Ellen Leuthauser and her husband, Scott. Former school principal Steve Marcus and his wife Rosie will reappear as well.

The KAC has worked collaboratively on the Nutcracker since 2008, first with the Dance Academy from New Hartford for a couple of years, the Borgardus Performing Art Center from Oneida, NY for a couple of years, and then up to the present with the Center Stage Dance Studio from Marcy, NY. This collaboration also features more than one hundred dancers and volunteers from both art centers and the local community.

Pre-sale tickets for the performance are $12 general admission and $8 for children 12 and under. Tickets can be purchased either at the Kirkland Art Center or online at kacny.org.

For more information please call 315-853-8871. Tickets will also be available the evening of the performance at the Clinton Performing Arts Complex Box Office, 75 Chenango Avenue, Clinton, NY, 13323 at the door, $15 general admission and $10 for children 12 and under.