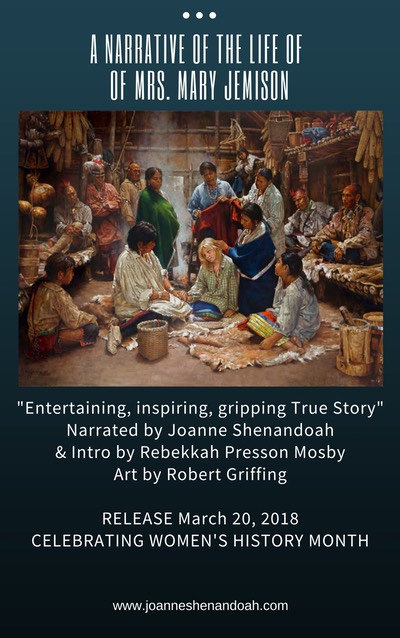 “A Narrative of the Life of

” is the compelling story of a colonial girl who was captured by Shawnees in 1755 at the outset of the French and Indian War. Mary Jemison, aged 12 at the time, was adopted by two Seneca women and spent the rest of her long life (she lived to be 90) with the Iroquois. She married two Native men and had eight children with them. When she was 80 her story was taken down by James E. Seaver, a minister and amateur historian.

Jemison’s life is filled with adventure and tribulation. When captured, her parents and siblings were killed, a tragedy that haunted her all her life; nevertheless, she came to love her Seneca family. Years later, when offered chances to return to her former home, she chose to stay with her Native family. She lived with Indians during the French and Indian and Revolutionary wars and has hair-raising stories to tell about war, as well as charming and even funny stories about peace time. She lived to see horrific war time brutality and to see three of her sons murdered, two of them by a brother; to be swindled by land speculators, a man posing as a long-lost white relation, and eventually to become a wealthy woman possessing thousands of acres of land in western New York State.

Jemison was named “Digewamis” by her Seneca family but was known as “The White Woman” by all. Hers is one of the great stories in American history.

The narrator of this book is ideally-suited for its reading.  Joanne Shenandoah, Wolf Clan Oneida, is a Grammy award-winning and internationally known composer and performer whose ancestor, Chief Shenandoah, would likely have known Mary Jemison. Joanne is a member of the Haudenosaunee (Six Nations Iroquois Confederacy). Shenandoah’s passionate reading conveys the power of Mary Jemison’s story.  “Some of the scenes were hard to read,” says Shenandoah, “At the same time I learned a great deal about an era in our history which was both troubling and challenging”.

The book is on 3 CDs and produced and directed by Rebekah Presson Mosby, who provides an introduction. DougGeorge-Kanentiio (Mohawk) is technical advisor and James Wunderlich at Orbital Sound the audio producer.

“A Narrative of the Life of Mrs. Mary Jemison” is available both on CD and as an audio download.

For additional information on recordings by Joanne Shenandoah: www.joanneshenandoah.com.