If only NIL money forced Dabo Swinney out of college 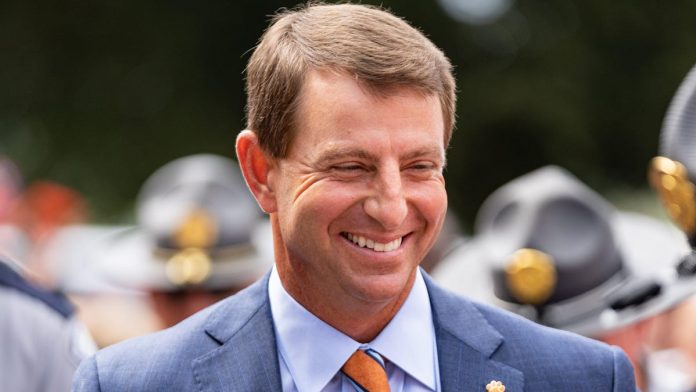 Clemson is 2-2, and as big of a shock as that is for a program that’s won the last six ACC titles with a pair of national championships along the way, we really should have seen it coming.

After all, the Tigers still are without a head coach, having not named one to replace Dabo Swinney, who left college football to “go do something else” once players got the ability to earn money from their name, image, and likeness — as Clemson quarterback D.J. Uiagalelei does in a Dr. Pepper commercial.

Wait a minute… Swinney is still at Clemson, and was there on the sideline in Raleigh as the Tigers lost the Textile Bowl to N.C. State for the first time since 2011.

Because he didn’t follow through with his promise to quit. There was never any principle about it, just wanting to maintain all of the power and money for himself. Swinney has been exposed, and now, so has his team.

Of course, I picked the Tigers to cover a 10-point spread on Saturday, which is why we make sure to emphasize that the picks are for entertainment purposes only. How did the rest of those picks from yesterday do?

Wisconsin, favored by 6.5 against Notre Dame, went out and lost, 41-13. Michigan State won in overtime, but came a yard shy of the touchdown that would’ve covered the spread, instead settling for a 23-20 triumph on a field goal. Army and Louisville covered, and Georgia, a 35-point favorite, had a 35-0 lead after one quarter of its 62-0 rout of Vanderbilt.

Not only did K’Vaughn Pope quit the Ohio State football team mid-game.

Not only did Pope’s departure include throwing his gloves into the stands.

Not only did this lead to a tweet that had to be quoted by The Columbus Dispatch as, “ ‘f—- ohio state,’ using a slang spelling for the obscenity.”

It also gave the world “POPE APPEARS TO QUIT TEAM — POSTS AND DELETES VULGAR MESSAGE” as a television chyron.

Imagine having to tell everyone forever that you quit Ohio State football during the Akron game, though?

The Giants won their 100th game, the Cardinals won their 15th straight, and the Padres and Mets were eliminated, clearing up the National League playoff picture a bit more with the season ending a week from today.

Things have been trending that way, though. The unexpected thing on Saturday also involved the American League, because the 105-loss Diamondbacks and the 105-loss Orioles both won.

It’s the second time this has happened in three days, as Arizona and Baltimore both won on Thursday. You have to go back almost an entire month to find the last time both teams won on the same day before that: August 26.

Shoutout to Pittsburgh for going up 2-0 on New Hampshire, but hiding the safety in a 77-7 score (with 707 yards of offense!) thanks to two missed extra points.

Shoutout also to Texas for its 70-burger, which came in a game against Texas Tech in which the Longhorns still managed to give up 35 points.

And shoutout to Central Connecticut State for holding Miami to 69 points. Nice job.

No credit at all to Princeton for its 63-0 win over Stetson. Schedule a real team, not a hat, nerds.

Baseball season ends a week from today, and perhaps by then Giancarlo Stanton’s grand slam to beat the Red Sox will have landed.

Three highlights of that call. First, Suzyn Waldman audibly chuckling as the ball heads over the Green Monster. Then, John Sterling repeating that Stanton hit it high and far, a tacit acknowledgment that his trademark call, “it is HIGH, it is FAR, it is GONE,” often is hokum, and used on balls that are neither high nor far. Last, but not least, Sterling — after almost six months of watching the Yankees vacillate between unwatchable and unbeatable — putting the only possible adjective on the season: “weird.”