Hot Wheels historian, author and collector Mike Zarnock will be at the Utica Children’s Museum for a Special Event 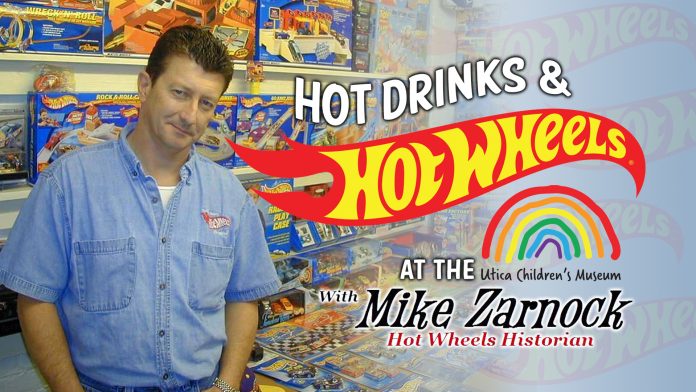 On Saturday, December 21st, visitors can meet Mike Zarnock at a “Hot Drinks and Hot Wheels” event the Utica Children’s Museum at 311 Main Street from 11am-1pm.

The Museum will have a “prize wheel” kids can spin to win Hot Wheels cars and other fun items, Mike will be signing autographs, and of course all visitors can view Mike’s amazing collection on the 4th floor. The Museum is home to a portion of his 30,000+ item collection and has cars and pieces that range from 1968 to the present day.
We will also have hot chocolate and Utica Coffee Roasting coffee available for visitors.
Regular museum admission prices apply for the day: $6 for children 12 and under, $8 for adults and $7 for Veterans/seniors/students
Facebook event link: https://www.facebook.com/events/451469695522040/
ABOUT MIKE ZARNOCK 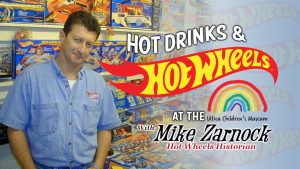 Mike is, and has always been, a big advocate for the Utica Children’s Museum.
Mike’s collection has held two Guinness World Records (2003 & 2007). It has also been featured in two different “Ripley’s Believe It Or Not!” Books (2008 & 2011). In February 2009, Zarnock was inducted into the Diecast Hall of Fame and later that year Mattel Hot Wheels reproduced his altered roadster racing car as part of their nostalgic “Drag Strip Demons” series. Mike has also been featured in many News Articles, Magazine Articles, TV Shows and Documentaries around the world.

Zarnock has appeared at schools, conventions, toy shows and Hot Wheels club functions across the United States and Canada, and has also appeared in movies.