Mixing sex and politics, humor and hope, Tim Miller charts the growth of queer citizenship in America and the new challenge of being rooted in resistance to today’s political environment. Rooted is about Central New York history and Miller’s family stories that plant him in the Empire State. It stops along the way at a NYC wedding day, a queer history of hurting hearts, the Department of Homeland Security, the DNA roots that lead Miller to Central NY, and a 1980’s power rock epiphany on a farm road in Yates County. Rooted is a funny and charged story of the times we are living in.

Miller’s performance works have been presented all over the world at venues such as Yale Repertory Theatre, London’s Institute of Contemporary Arts, the Walker Art Center, Actors Theatre of Louisville, and the Brooklyn Academy of Music Next Wave Festival. He is a cofounder Performance Space 122 in New York City and Highways Performance Space in Santa Monica, CA. 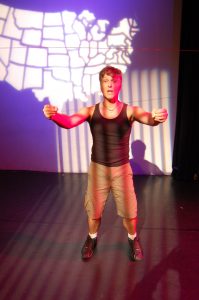 Tickets are $20 for adults and $15 for senior citizens. Parental discretion is advised for children under 17.  Additional funding comes from the Department of Theatre and the Deitrich Fund.  There will also be an ensemble performance at 8pm on Friday, October 6 in the Barrett Theater with participants from Miller’s Body Maps workshop.

For more information, call the box office at (315) 859-4331 or visit www.hamilton.edu/performingarts.