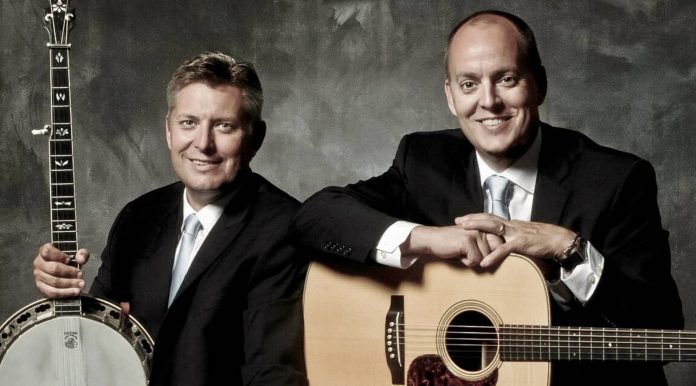 Clinton, NY – The Gibson Brothers are just two northern boys in a southern world. Growing up in northern New York on the family farm, they worked hard to make a name for themselves in Nashville and beyond, and they’ll be ‘home’ in Upstate New York for a concert at the Kirkland Art Center in Clinton on Saturday, March 28 at 7:30pm.

The duo’s immense success in the country bluegrass scene can be summed up in the lyrics from I’m  A Better Man,  a track off their newly released album, Mockingbird.   “I’ve been trying to reach you, trying so bad. There’s always someone in the way. I’m a better man than what you say.” Back in the late ‘80s, the brothers got offered a major record deal, only to be told at the last minute that their sound was too ‘retro’ for modern country music. They kept working and kept playing, and in the end, they did reach their dreams. The brothers will probably tell you that they are indeed better men for it.

Mockingbird mixes country, soul and seventies rock, cementing the sibling duo as musical trailblazers. ‘Come Down’ evokes the 70’s sound of radio rock kings America while ‘Lay Your Body Down’ embodies an R&B style. Both songs dispel any notion that the Gibsons are solely a bluegrass act and prove Eric and Leigh’s gift for penning boundary-pushing songs. “The songs on this album are the sounds we heard growing up, riding around with our dad, who was a farmer, in his pickup, or with our mom in her station wagon. This sound was on the radio,” says Leigh Gibson.

The mission of the Kirkland Art Center is to educate children and adults to advocate for artists and the arts, and to engage the community in a range of cultural experiences and opportunities.

Facebook
Twitter
Previous article
TRAID Program Provides Equipment and Technology for People in Need
Next article
Princess Cruises to test fewer than 100 for coronavirus; thousands may have been exposed