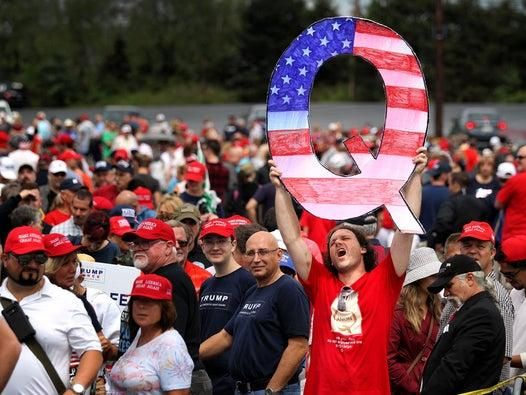 Republicans in Oregon have nominated an outspoken follower of the QAnon conspiracy theory to serve in the US Senate, in the latest sign the far-right online movement was beginning to enter the mainstream political fray.

The Republican nominee thanked her supporters and the QAnon community in a celebratory speech that was live-streamed after the results were announced, saying: “As we Q people like to say, ‘Where we go one, we go all.’”

QAnon has stirred controversy and gained prominence among right-wing circles on sites like 4chan, with supporters following and dissecting vague messages from an anonymous leader that goes by the name of “Q”. President Donald Trump has seemingly attempted to lend credibility to the conspiracy, retweeting a QAnon hashtag. Followers of the theory believe a “deep state” has worked to undermine or overthrow his presidency, while some have gone as far as claiming he himself may be Q.

Still, there has never been any evidence to support the claims surrounding QAnon, a theory that some have said sprouted from the unfounded Pizzagate conspiracy that gained notoriety during the 2016 presidential election.

That conspiracy also claimed high-level government officials like former Secretary of State Hillary Clinton were involved in an apparent child abuse ring, and led to an armed man storming a Washington pizzeria in an apparent attempt to rescue the children that were supposedly being kidnapped from their families.

In describing her decision to publicly support the conspiracy theory, Ms Perkins told Right Wing Watch in January that she was taking a “very highly calculated risk”.

“Most people play it a lot safer than I do,” she said. “It’s either pure genius or pure insanity. It’s one of the two. The voters are going to have to be the ones that make that decision.”

Ms Perkins added: “I think that there’s probably a lot of us out there, but I just happen to be bold enough to say, ‘Hey, I’m following Q because I want to know, because if the Q team is real, I want to know about it.”

As for who she thinks may be behind the conspiracy, Ms Perkins has suggested the anonymous leader “is most likely military intelligence” who has been “watching what’s been going on with our country for decades”.

She continued: “They are partnered with President Trump to stop the corruption and to save our republic.”

Ms Perkins will face off against Democratic incumbent Jeff Merkely, who won his 2014 re-election bid by 19 points, as Yahoo News reported. But she’s not the only QAnon conspiracy theorist on the ballot nationwide: the news outlet reported there are “dozens” of others running in the 2020 elections.

National Guard deployments end day before they can claim benefits