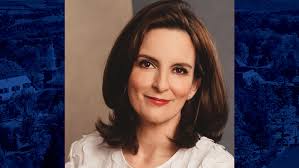 Clinton, N.Y. — Tina Fey, the executive producer, head writer, and star of NBC’s Emmy Award-winning comedy “30 Rock,” will be the next guest in Hamilton College’s Sacerdote Great Names series, on Tuesday, Oct. 22, at 7 p.m., in the Margaret Bundy Scott Field House. The event is free and open to the public, but tickets will be required. They will be available at www.hamilton.edu/greatnames in September.

Tina Fey is an award-winning writer, actress, and producer who is known as Liz Lemon from her three-time Emmy Award-winning comedy series “30 Rock.”  Prior to creating “30 Rock,” Fey completed nine seasons as a writer and cast member on “Saturday Night Live.”

Fey’s film projects include “Sisters,” “Whiskey Tango Foxtrot,” “Date Night,” and “Mean Girls” (which she wrote). In 2010, she became the youngest recipient of the Mark Twain Prize for American Humor. In April 2011, she released her first book, Bossypants, which topped the New York Times bestseller list for over 36 consecutive weeks.

Fey and friend Amy Poehler co-hosted the Golden Globe Awards from 2013-2015. Fey was also co-creator and executive producer of the hit Netflix comedy series, “Unbreakable Kimmy Schmidt,” and an executive producer of the NBC comedy series “Great News.” Most recently, she wrote the book for the Tony-nominated hit Broadway musical “Mean Girls,” based on the film of the same title.