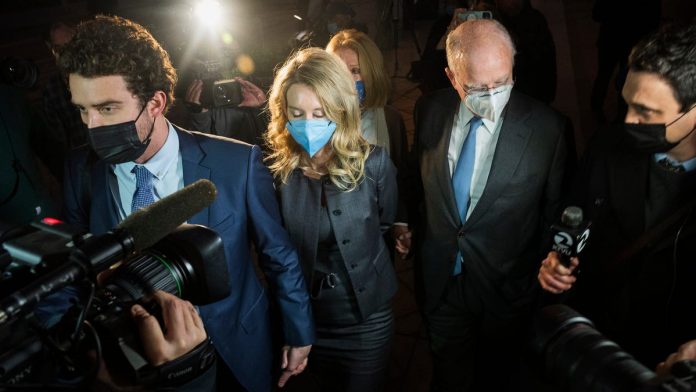 The former Theranos CEO was convicted on Monday after a lengthy trial.

Elizabeth Holmes, a Stanford dropout at 19 with a baritone timbre and piercing stare, became Silicon Valley’s sweetheart when she convinced wealthy investors she could revolutionize blood testing and promised Americans that their medical lives would be changed forever.

After over $900 million of investments from wealthy donors, falsified blood tests, felony charges in 2018, and a guilty verdict four years later, the promises from the former Theranos CEO fell flat on their face in the public eye.

But in Silicon Valley, where most startups fail and the mantra of “fake it till you make it” is gospel, it remains to be seen whether tech investors and entrepreneurs will change their risky habits following Holmes’ conviction.

Holmes, 37, was convicted of four of 11 charges of fraud and conspiring to commit fraud against investors on Monday.

Fraud usually isn’t prosecuted in California, particularly in Silicon Valley, and especially involving such high-profile figures, said former federal prosecutor Neama Rahmani. But in this case, those combined factors crafted the perfect recipe for the federal government to convict Holmes and send a warning message to Silicon Valley, he said.

“Federal prosecutors lack the resources to prosecute every type of crime,” Rahmani said. “They can choose to go after fraud by corporations and start-ups or they can focus on violent crimes and narcotics. This victory gives a lift to prosecutors who want to more aggressively go after white-collar crime.”

“This was a big win for the government, and to the extent that startup culture has always been the Wild West, they’re really going to have to look at the mirror and clean things up,” he added.

Before her downfall, Holmes seemed to be the perfect bite for Silicon Valley investors looking for their next meal. She traced the footsteps of her ultra-successful predecessors like Mark Zuckerberg, Bill Gates, and Steve Jobs in dropping out of college at 19 years old to pursue her business, even to the point of adopting Jobs’ signature black turtleneck into her own style.

She spoke with confidence and mingled with tech titans and politicians. Her idea that a pinprick of blood could be used to run dozens of tests, helping people detect life-threatening conditions earlier, was revolutionary and fit the bill of Silicon Valley’s love affair with high-risk, high-reward investments.

“Let’s face it: Silicon Valley is based on dreams,” said Richard Greenfield, a lawyer who represents investors in startups. “And you need people to keep stoking the fire to help keep those dreams alive.”

Over $900 million in investments from wealthy donors such as Larry Ellison, founder of Oracle; Rupert Murdoch, billionaire media mogul; and the Walton family, who founded Walmart, fueled Holmes’ ambitions and ideas. Theranos grew to over 800 employees, reached a $9 billion valuation, and had a laboratory space in a suburb of Silicon Valley.

Holmes mastered Silicon Valley’s “fake it till you make it” approach — a little too well. Theranos’ flame began sputtering when it was revealed that the company lied about purported deals the company had reached with big drug companies such as Pfizer and the U.S. military and that its blood-testing technology kept producing misleading results.

Holmes was indicted in 2018 and both she and her ex-business partner and former boyfriend Sunny Balwani were charged with two counts of conspiracy to commit wire fraud and nine counts of wire fraud.

“Silicon Valley’s darling, the fastest self-made female billionaire at the time, is going to do many, many years in prison,” Rahmani said. “So it’s going to change how people operate.”

While the trial likely clears the way for prosecuting more fraud in California, it’s unclear if Valley investors will back down from gambling on risky investments.

USA TODAY OPINION: Silicon Valley makes a god of Big Tech. But religious faith is exactly what it needs.

“I think it will generate some more caution among entrepreneurs, but for the most part, human nature being what it is, there is still going to be a tendency to exaggerate, especially when you know you might not get funded if you don’t,” Greenfield said.

“And I don’t think it will change many investors’ attitudes,” he added. “People are still going to want to reach for the moon.”

Aron Solomon, Esquire Digital’s chief legal analyst, said the guilty charges might even be an incentive for investors to put more money in risky startups.

Holmes was found not guilty on charges of fraud and conspiring to commit fraud against paying customers. But her guilty charges for defrauding investors, coupled with possible wider clearance to prosecute fraud, could mean a legal safety net for investors.

“This is a win for those kinds of investors,” Solomon said. “Because now, they have additional leverage over startup founders. This is just going to intensify that culture of risk.”

Holmes’ sentencing, which could be months from now, and Balwani’s trial, which has yet to begin, will further determine the trial’s impact on startup culture.  Holmes faces up to 20 years in prison for each of her convictions, but legal experts anticipate she will serve far less time.