De Bruyne, Guardiola views about burnout are right: We need 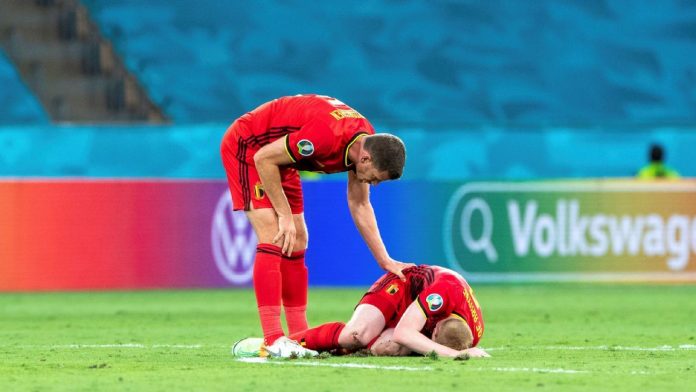 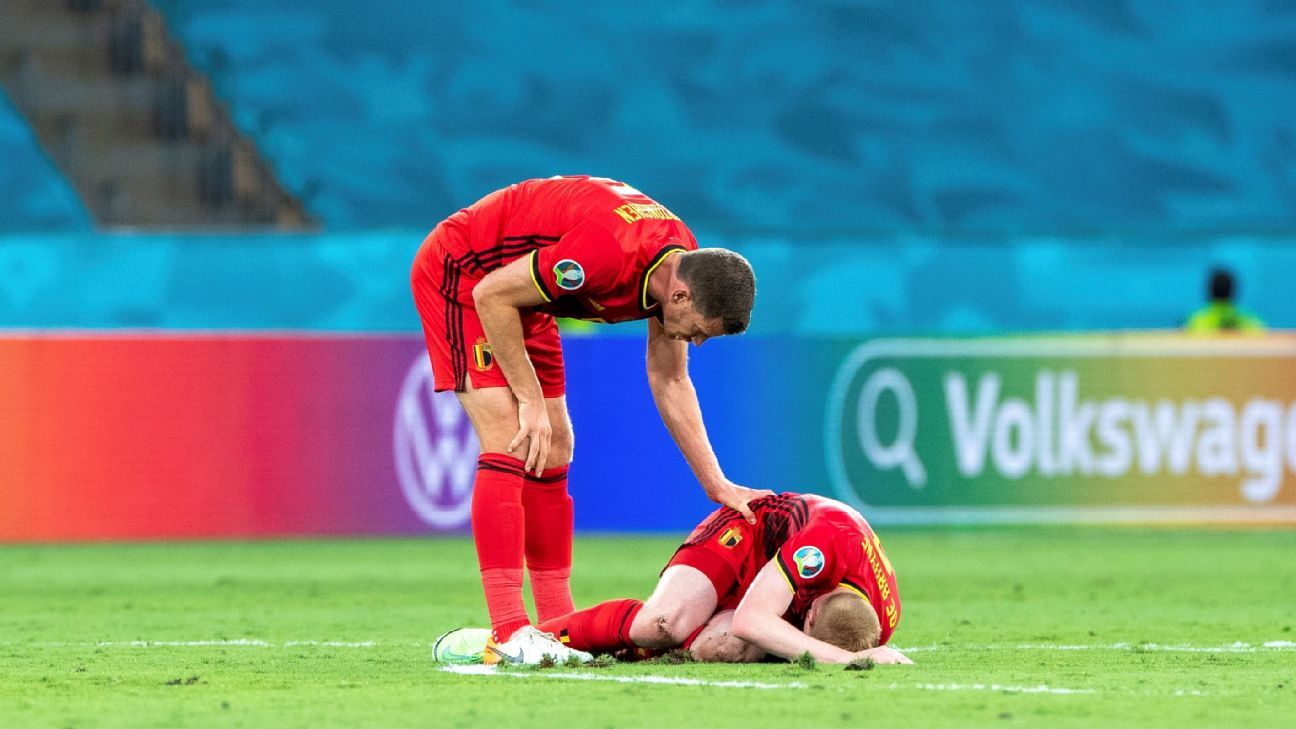 Kevin De Bruyne played with painkilling injections at the Euros. There has to be a better solution to avoid players being worn out due to the grueling club and country schedule. Meng Dingbo/Xinhua via Getty Images

Last April, Manchester City boss Pep Guardiola sounded the alarm, complaining that UEFA and FIFA were “killing” the players by scheduling too many games with not enough recovery time. “No player can sustain, not just [the] physicality, [but also the] mentality to be ready every day to compete against opponents to win the game.”

Earlier this week, Kevin De Bruyne, one of Guardiola’s players at City, said he played with two painkilling injections against Italy at Euro 2020 and that “if I’d known beforehand what it would do to my ankle, I wouldn’t have played.” And last week, FIFPRO, the international players’ union, issued their report on player workload.

(Then, on Sunday after losing to Italy in the UEFA Nations League third-place game, Belgium goalkeeper Thibaut Courtois reinforced this idea of player exhaustion. “It’s just a money game, and we have to be honest about it…for UEFA, it’s extra money and it’s an extra game because it’s on TV. Of course everyone wants to play, but look at how much both teams changed. If the teams had been in the final, there would have been other players playing. This just shows that we play too many games.”)

They found, not surprisingly, that many top players are severely overworked. It’s not just a question of playing too many games; it’s a question of too many minutes in what is defined as the “critical zone” — two stints of at least 45 minutes on the pitch with less than five days rest in between — when short-term and long-term health are most likely to be impacted. And there are other issues of course, from global travel to off-season breaks that, for many, keep getting shorter.

Speak to top players, coaches, administrators or even Arsene Wenger — whose biennial World Cup plan, he says, is based on playing fewer, but more meaningful, games — and it feels like it’s the one thing most can agree on, at least in public.

It’s a debate that has come to the fore because the International Match Calendar — the master agreement that governs when football matches, domestic and international, can be played — expires in 2024. It’s football’s Y2K (if you’re old enough to remember that) and some sort of agreement has to be hammered out, but the problem here is that this is a hugely complicated issue only partly about money and influence, with nobody wanting to take a step back and play fewer matches.

For a start, there’s a striking imbalance in the number of matches teams play even in the same league. Crystal Palace and Manchester City are both English clubs who play in the Premier League, but the former played 40 games (they weren’t in Europe and got knocked out early in domestic cups) while the latter played 61 — an increase of more than 50 percent — because they reached the Champions League and League Cup finals and the semifinal of the FA Cup.

Would Palace have liked to play more games? Sure. Maybe not 61 like City, but professional athletes generally like to play sports (duh) and, of course, owners like the TV money, exposure and home gates that playing games brings. You’d imagine Palace fans would have enjoyed it too. Going to watch your team play at home in a competitive match is fun, and they only got to do it 19 times. (City fans, meanwhile, did it 28 times.)

And this is Palace we’re talking about. At least they’re in the Premier League, which means they get to play against a range of coaches and styles, as well as many of the world’s best players. The vast majority of teams in European leagues don’t get that. They either only play domestically or, if they qualify for Europe, usually go two-and-out in the qualifying rounds. That’s why, incidentally, the idea of reducing the number of clubs in Europe’s top leagues to 18 — of the Big Five leagues, only the Bundesliga has 18 while the rest have 20) remains so unpopular as anything other than a talking point. (It’s a bit like trading in your gas-guzzling SUV for a compact car.)

Yes, a Premier League or LaLiga structure with 18 clubs would eliminate four fixtures, offering more rest/recovery time. It would mean more meaningful fixtures (and fewer pointless ones). While the TV deal might shrink a tiny bit, in practice you’d be losing midweek fixtures, which are generally less lucrative. That would be offset by the fact that you’d be sharing the revenues among fewer clubs. It would also give clubs more time to train and prepare, which might actually make for better games too.

Of course, while it would make a lot of sense, nobody wants to be among the clubs who lose out, so in the end nothing gets done. And most player unions are against this as well, because fewer top-flight teams means fewer jobs.

In fact, the direction of travel is the opposite one, at least in Europe. Just consider the revamped Champions League and its Swiss model which, from 2024, will add four fixtures to every participating club’s calendar. After all, the easiest way to boost revenue quickly is simply to get the biggest teams with the biggest stars to play more games.

But back to De Bruyne, Guardiola and everybody else who feels top players play too many games and it’s harmful to their well-being. What do you do? Tell them to suck it up? “Oh, you like living in your gigantic house with the three sports cars? You enjoy the generational wealth you’ve accumulated and the fame that comes with it? Yeah? Well, playing a few extra games is the price you have to pay for it, so deal with it.”

It’s a tempting stance for some, but hopefully we can be a bit more enlightened. Nor can we just sit back and rely on sports science to do its thing. Yes, despite the legitimate complaints, ex-pros today lead better, healthier lives than those of yesteryear and perform at a high level for longer. Much of that is due to sports science and medicine, but you can’t rely on that bailing you out forever. Players needing painkillers to remain active, or not training properly in-season because they need to play matches, ought to be the exception, not the norm.

We need to be smarter and do better, and the Match Calendar reset offers the opportunity to do this, with a number of solutions that are being explored.

Belgium head coach explains how his side failed to make the Nations League final after France come back from two goals down.

Just as air traffic controllers and truck drivers have limits on the number of hours they can be on the job, maybe some limit can apply to footballers — perhaps in terms of the time they can spend in the “critical zone” or in providing “mandatory rest periods” at the end of season. Slashing the number of teams (and therefore games) in competitions is probably part of the solution too, though as we’ve seen, it’s difficult. But maybe there are other, better formats that can be explored.

International football is, obviously, another strand to this. His plan for a biennial World Cup has its flaws, but Wenger is right when he talks about people wanting fewer matches, but more meaningful matches. Meaningful to the players for development, for the fans for entertainment and, yeah, for the member associations at the cash register. Sometimes, less really is more.

And then there’s the elephant in the room. Clubs make money from playing games and just about everything is tied to that, whether it’s gate receipts, broadcast revenue, prize money, eyeballs that can be turned into sponsorship money or brand-building that can shift merchandise. Clubs need and want money, and when you’re in that situation, you can either cut costs or increase revenue or, ideally, both.

Most leagues have some sort of cost control, though they stop short of a salary cap. Yet there are other ways to limit costs, like tying a portion of a player’s salary to club revenue (effectively, giving them equity, except you’d call it a bonus). And like we said, while the top players play a ton of games, the vast majority could probably stand to play a few more games. Would they generate as much revenue? No. But they’d generate some revenue, and that too could be part of the answer.

What seems to be clear is that there are many moving parts here. We need a holistic solution, and it can’t simply involve the top players and teams in the world playing each other 24/7.

Facebook
Twitter
Previous article
How to watch Champions League in the USA: Full TV
Next article
Ciara Shares Photo of Russell Wilson in His Hospital Bed