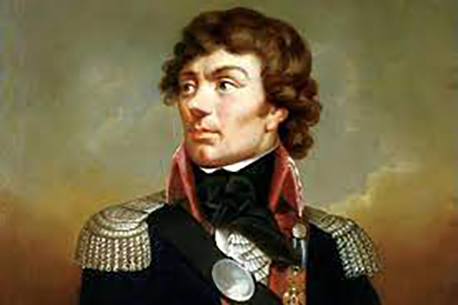 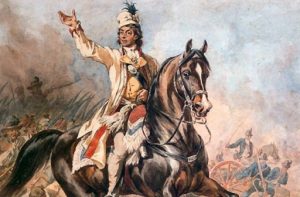 Colonel Kosciuszko (Kos—choos—KO) set out for America after hearing about fighting in Lexington and Concord in the year 1775. He was already on his way across the Atlantic when the Continental Congress adopted the Declaration of Independence. Kosciuszko arrived in Philadelphia before the end of August, and on the 30th of that month, a petition he wrote was read aloud in Congress. His petition requested that he be assigned to the army of General George Washington.

At the time, Kosciuszko was thirty years old, born in Poland in February 1746. He was the youngest son of a Polish family of noble background, but of limited wealth. Kosciuszko studied in the elite Corps of Cadets in Warsaw for four years, and, in 1769, he entered the French Higher Military School, Ecole Militaire. This academy was located in Paris where, for four years, he studied military strategy, fortification, defense, and engineering.

Kosciuszko obviously knew Polish very well, but he also spoke French and German and eventually, he learned to speak English. He was polished in manners, modest in nature, knowledgeable in science and was also an amateur artist. While Congress considered his request for a place in the army, he was pressed into service by the worried Council of Safety in Philadelphia. New York had fallen to the British, General Washington was retreating across New Jersey and an assault upon Philadelphia was expected both by land and with British gunboats, by way of the Delaware River.

Kosciuszko, an engineer, helped block the river, first by building fortifications on Billing Sport Island, just below the city. Later, he strengthened the defenses on the New Jersey shore at Red Bank (Fort Mercer).

On October 18, 1776, Congress approved Kosciuszko’s commission as Colonel of Engineers in General Washington’s Continental Army. With his military skill and trained foresight, the Pennsylvania Committee of Defense asked Kosciuszko to draw up plans for fortifying the Delaware River.

Kosciuszko in the American Re Re Revolution—1776 to1783

In the campaign of 1777, British General John Burgoyne believed that the Hudson River would be a strategic highway through the northeast, based on his previous experience when he arrived in America in 1775. His ’77 northern campaign plan intended to move his army south from Canada via the Lake Champlain-Hudson River route to Albany. A smaller force, under Colonel Barry St. Leger, would support him by marching east from Lake Ontario and into the upper Mohawk Valley. Burgoyne and St. Leger planned to meet in Albany and join forces with Sir William Howe’s army in New York City. If the plan worked, together they would destroy the rebellion.
General Gates promptly ordered his demoralized troops to move northward again. Gates sent Kosciuszko and Colonel Hay ahead to select a position on the western bank of the Hudson which, with its hilly and covered surface, would be best suited for defense.

They rode up the hill and examined the grounds on Bemis Heights; Kosciuszko decided immediately that this was the proper position for a fortified camp. He inquired as to the number of divisions and regiments in the army, along with their names, then took a piece of paper from his portfolio and drew a plan of the camp, assigning the location of several regiments. In conformity with that plan, the troops hastily marched to the locale and immediately proceeded to erect breastworks and fortifications. Over a thousand soldiers started work on Bemis Heights, developing the defense and fortification of Saratoga.

Time and the tide of events were now beginning to get the best of General Burgoyne. St. Leger, which resulted in the halting of his advance down the Mohawk Valley to besiege Fort Stanwix. In the Battle of Oriskany on August 6, St. Leger stopped the American militia marching to aid the fort, but after

learning that a strong force, under the leadership General Benedict Arnold, was on the way, St. Leger halted the siege and retreated to Canada.

General Burgoyne’s detachment faced a far more grim fate when they were sent to Bennington. On August 16, General John Stark’s and Colonel Seth Warner’s New England troops shattered this force, inflicting 900 casualties. Despite the setbacks, Burgoyne severed communications with Canada and risked everything with a push to Albany. His army crossed to the Hudson’s west bank at Saratoga (now Schuylerville) in mid-September and continued advancing south. Four miles north of Stillwater, Burgoyne came upon 8,000 Americans, commanded by General Horatio Gates, who had replaced Schuyler.

The Americans had dug in on Bemis Heights, a strong position where the road to Albany squeezed through a single line march between the hills and the river. American artillery was stationed on heights and in redoubts along the Hudson, giving them command of both the river and the road. Burgoyne’s heavily burdened army had two choices: go between the hills and the river, risking destruction, or driving the Americans from the fortified heights. The British General chose to attack.

When General Burgoyne’s redcoats approached from the north, Kosciuszko’s defenses were ready. The Americans were positioned on Bemis Heights at a narrow place in the river about seven miles below the Village of Saratoga (Schuylerville). The only north-south road was squeezed tightly against the river, making it exposed to gunfire from the hills. Burgoyne was unable to make his way around the Americans which forced him to attack the strongly defended position. The first day of this bloody battle occurred on September 19, 1777.

British soldiers, with fixed bayonets, made charge after charge but were repulsed. By night, they were still some two miles north of the American lines on Bemis Heights. Burgoyne delayed nearly three weeks, hoping that the other British forces in New York would bring him relief, but help never came.

With his base far behind in Canada and his supplies running low, Burgoyne made a final, desperate attempt to outflank the American position and force his way to Albany, but Kosciuszko’s defenses held. The British retreated and were surrounded near Saratoga. On October 17, 1777, Burgoyne surrendered with a force of 6,000 soldiers.

Colonel Thaddeus Kosciuszko, a volunteer in the patriot cause, had directed the construction of this powerful position. It proved to be a key victory against Burgoyne in 1777. The infantry and cannons hoisted there, supported by batteries near the riverbank, closed off the Hudson Valley route to Albany. This battle would become known as the turning point of the American Revolutionary War.

After the victory at Saratoga, it was decided that a new, permanent fortification would be built further south of the Hudson at West Point. Kosciuszko was sent there as chief engineer in March 1778 and remained for 28 months. He was charged with planning and building hilltop forts, redoubts, gun emplacements, breastworks, and troop barracks to eliminate any further invasion from Canada. During the early part of his assignment at West Point, Kosciuszko’s work was completed with emergency speed, lest there be a British assault. Washington established his headquarters nearby and the work proceeded in relative security at a more orderly pace. West Point became ‘the Gibraltar of America’, and the British were never able to capture it.

Some have said that West Point was Kosciuszko’s greatest achievement because by preventing a battle, he saved lives on both slides. Washington himself was greatly interested in it. In the same way he had selected Saratoga, Kosciuszko selected West Point as a key point in the defense of the Hudson.

Several factors entered into Kosciuszko selection of West Point: the mountains were high and the river’s current was rapid. The river was also at its narrowest here, with a sharp bend. Kosciuszko fortified both sides with tremendous artillery control, lined all approaches and protected the batteries with masonry thirty feet thick. With sheer drops, it made scaling the heights impossible. Furthermore, Kosciuszko literally chained the Hudson with links weighing 140 pounds apiece—enough to stop large British ships with the line.

Kosciuszko was the first person to suggest to General Washington and Thomas Jefferson that West Point become a military academy. General Benedict Arnold became a villain there, exposed when Major John Andre was caught attempting to supply the British army with plans of the Kosciuszko fortifications.

The first monument erected at The West Point Academy was a tribute to Thaddeus Kosciuszko, commissioned and paid for by the cadets themselves. Cadet Robert E. Lee
was one of those responsible. The monument still stands, near a corner of the parade ground, on the site of one of the forts he built.

After completion of the West Point fortification, General Gates gave Kosciuszko a Negro slave as a token of appreciation; Kosciuszko freed him. The former slave’s name was Agrippe Hull and after the two of them had become dear friends, Kosciuszko took Agrippe with him on a trip to Poland.

After the war’s end, and after an effective service in the southern theater of operations, Congress awarded Kosciusko with the rank of Brigadier General, complete with a pension and land estates in Franklin County, Ohio. He was also elected to the Society of Cincinnati, of which Washington was the first president. Its motto read: “He relinquished all to serve the Republic.”

On October 15, 1817, Kosciuszko died in Soleur, Switzerland. The next year, his body was brought to Krakow, Poland and placed in a vault at the Royal Castle on Wawel, the holiest shrine in Poland. He was a hero of two worlds.

What is “quiet quitting?”