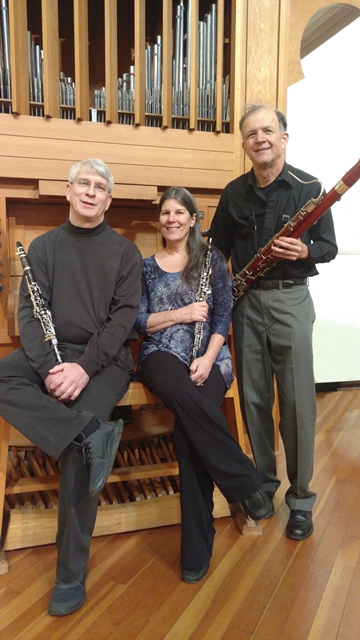 More event info at www.facebook.com/RemsenArtsCenter or remsenartscenter.org. Proceeds from the events will benefit the Remsen Arts Center programs.

The Group consists of Matthew White on clarinet, Craig Vandewater on bassoon, and Darlene Vandewater on oboe.
Concert Selections:
Cinq Pieces En Trio                                      Jacques Ibert
Allegro vivo
Andantino
Allegro assai
Andante
Allegro quasi marziale
Divertimento in C Major (Trio No. 1 from the “London Trios”)                               F. Josef Haydn
Allegro Moderato
Andante
Vivace
Divertimento                                         Antonin Szalowski
Allegro
Andante
Allegro
Habanera (from Aires Tropicales)              Paquito D’Rivera
INTERMISSION
Musette (from “3 Feuillets d’album”)            Georges Pfeiffer
Recitativo e Terzetto                                       Peter Winkler
Lento
Presto
Three Celtic Tunes                                 Turlough O’Carolan
Captain O’Kane
Planxty Drury
Lord Inchiquin
About the performers:
Darlene Vandewater has been an oboist since grade school, and studied for a degree in Music Education at Towson University. Her oboe teachers included Paul Covey, Lloyd Shorter and Leslie Starr. Darlene was a member of the Graceful Occasions wind trio and has performed in the Susquehanna Symphony, the Newark Symphony and the Immaculata Symphony.  She performed in a chamber group for a Baltimore Symphony board meeting, and in a woodwind quintet at the Meyerhoff with BSO members.   She has coached at Vermont Music & Arts Center, performs in pit orchestras for musicals and operas and in small ensembles, solos at area churches and other freelance work. She teaches oboe privately.
Matt White is a graduate of the Ithaca College School of Music, and has studied with Stanley Hasty, Robert Marcellus, and Richard MacDowell. A programmer by day, Matt performs with several chamber groups including Kuro Winds, the CSMA clarinet ensemble, and the Trio that’s playing today. Other groups that Matt has played in are the Chicago Lyric Opera and the Cayuga Chamber Orchestra.
Craig Vandewater studied at SUNY Stony Brook and Yale with Arthur Weisberg, his principal teacher. He completed his doctorate at Stony Brook and has taught at the University of Texas (El Paso), the Blue Lake Fine Arts Camp and the Ross School of East Hampton. He was the solo bassoonist of the Peconic Chamber Orchestra and the North Shore Pro Musica of Long Island. He was also a member of the Lancaster Festival Orchestra, the El Paso Symphony, and the Symphony of Long Island.   He was the bassoon coach at Vermont Music & Arts Center for 12 years, and is on the faculty at Summertrios Chamber Music Workshop in Pennsylvania.  Craig also instructs privately.
More event info at www.facebook.com/RemsenArtsCenter or remsenartscenter.org. Proceeds from the events will benefit the Remsen Arts Center programs.