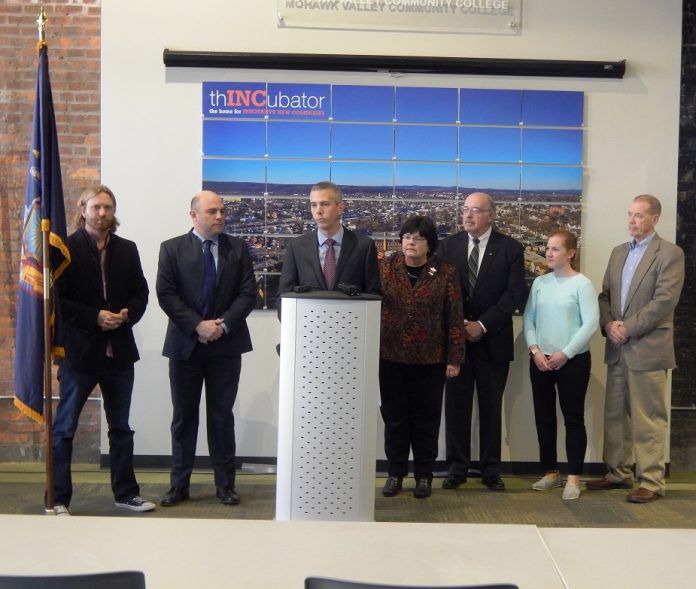 Brindisi: The Internet Should Not Become A Toll Road

(UTICA) — Assemblyman Anthony Brindisi of Utica announced today that he will both push and co-sponsor legislation to return Net Neutrality to New York. The Brindisi-backed bill would require Internet providers doing business in the State of New York to certify they don’t slow or speed up the web traffic of certain people or businesses at the expense—or gain—of others.

Brindisi says his push is a direct result of the federal government egregiously voting to do away with Net Neutrality while setting the stage for a ‘haves and have nots’ Internet. Brindisi says the Federal Communications Commission’s recent decision to end net neutrality will stifle innovation, impact small businesses, and hurt students and families across our area. Brindisi made his announcement at the thINCubator, a business development center.

“The internet should not be a toll road, don’t we have enough of those?” said Assemblyman Anthony Brindisi. “Under this plan we not only tell the internet providers they can’t drop internet tolls on New Yorkers, but we protect the free and open internet here at home—and we send a national message. I’ve already taken on the Internet providers once and I am here to say: I will do it again. First they want our privacy, and now they are coming for our hometown.”

Brindisi said a classic example of the problem with the federal government axing Net Neutrality is that entrepreneurs or small business start-ups that require a lot of bandwidth may soon have to pay more for it, and in many cases that could have a real effect on their future growth.  Brindisi added that public libraries pride themselves on providing free and open access to information for everyone, and giving Internet Service Providers the ability to charge for extra bandwidth or prioritize content jeopardizes that mission, and may put some content out of reach of those who cannot afford to pay for it.  Allowing large corporations–Internet Service Providers–to control the content the public can access, and to limit some service only to customers who can pay for it would have major repercussions, Brindisi urged. He says currently, major ISP’s with business before the state include Verizon, Sprint, AT&T and Spectrum.

Brindisi says legislation he is sponsoring (A.8802) directs all state agencies and municipalities to stop doing business with Internet Service Providers that are not net neutral.  It also gives the Public Service Commission the authority to regulate ISP’s on issues involving Net Neutrality.

“The unprecedented control over the vital resource that the Internet represents is ripe for abuse.  At particular disadvantage are small businesses, tech startups, and new content providers, who will not be able to pay service providers to have their data carried at full speed and bandwidth to consumers.  Contrary to statements by the FCC, repealing Net Neutrality will only benefit large, wealthy corporations, and will stifle growth and innovation in the tech sector,” said Anthony Martino, Director of the Northeast Cybersecurity and Forensics Center at Utica College.

“As New York looks to attract and retain our top talent, support innovative new companies and foster a culture of entrepreneurship, protecting net neutrality becomes a vital piece of our economic infrastructure. It will ensure innovative businesses can develop and scale their companies on a level playing field, and also continue to allow our small businesses to sell their products and services around the globe without unnecessary barriers. Perhaps most importantly, it will make sure that access to all aspects of the web is available to all,” said Ryan Miller, Director of the thINCubator in Utica.”

“When you walk into our member libraries, you will often see a number of people on the Internet.  A recent Siena College poll showed that 25 percent of people in lower-income households depend on the library as their main source of accessing the Internet.  These are people searching for jobs, paying bills, keeping up with the news, or doing research for a class project.  Libraries have always provided access to information for everyone, regardless of background, and in recent years that has included Internet access.  Ending net neutrality jeopardizes that, and puts students and low-income residents at a disadvantage.  I support Assemblyman Brindisi’s plan to restore net neutrality in New York,” said Wanda Bruchis, Executive Director of the Mid York Library System in Utica.