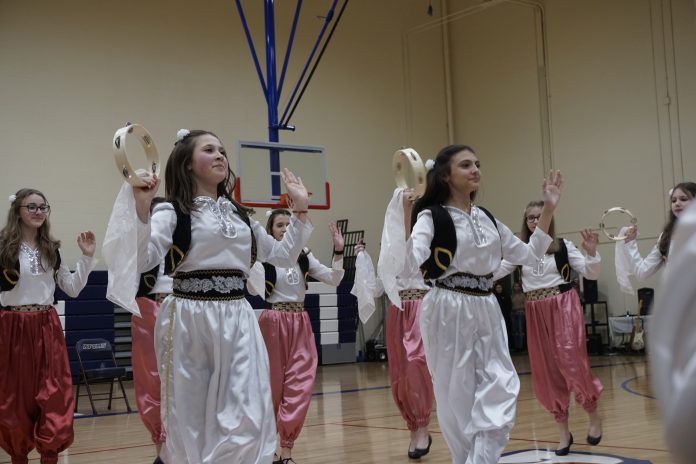 Saturday evening, Bosnian Utica gathered in the basketball court of the Utica Academy of Science to celebrate the 30th anniversary of their independence from Yugoslavia in 1992. The court was filled with Balkan looking people, some wearing traditional clothing or islamic garb, and sounds of Bosnian music and language. Organizers from the Bosnian American Community Association like Hanka Grabovica and local politicians such as Celeste Friend and Marianne Buttenschon gave speeches to honor the many contributions of our Balkan immigrants. See more photos here

After the speeches the Bosnian Dance youth group, Bosnian Behar, performed in front of all. “Bosnian Behar was formed in 2019. The Purpose was for folklore to help preserve Bosnian traditions, culture, and heritage within the community through teaching and cultivation of customs, dance and arts. These traditions are passing through generations.”

The dances were watched with great enthusiasm and were performed first by elementary schoolers, then grade schoolers, and eventually joined in by adults from the audience. One such audience member, Merima Smajic, addressed the crowd in English and Bosnian and even announced that she is running for County Clerk’s office.

Handzel: So, you were born in Bosnia?

Smajic: I immigrated to this country when I was about 4 or 5 years old in the 1990’s with my mother and grandmother. Grew up in Utica. Life long resident in Utica.

Handzel: Given the tensions over in the Balkans right now, is this celebration especially important?

Smajic: Oh, yes. This is Bosnia’s independence day. I think it’s a very good event to have every year. A lot of these kids [the dancers] that you saw here tonight were all American born, and it’s really nice to see them upholding a lot of our traditions and culture, and making a greater melting pot than we already are and adding their own little flavor. So, I think it’s very important for us not to forget and also for all Americans to know who we are and where we come from. We’re just people looking to help each other and this is our second home.

Handzel: And how do think the dance number went?

Smajic: Oh, very good! I used to be in them when I was a kid myself, so I really enjoyed it. I kinda felt down just sitting down, but I’m glad they’re upholding all of that.

Smajic: I like the Cevapi. They almost look like breakfast sausages, but they’re not. That’s my favorite and i think it’s a big hit throughout Utica.

Handzel: And do you think next year’s event will be even larger?

Smajic: Yes! I was here two years ago when they had an event, and already I think it’s doubled since then. You’re getting a lot more even American people coming, which is great. I’ve seen more media here reporting, so I can only hope that it keeps expanding.

After the first hour of dancing everyone headed to the table to get some Bosnian cuisine, which comprised mostly of meat, bread, and meat. Oh, and salt. It was extremely hardy and delicious. So much so, that a review of some of the Bosnian restaurants is in order.

After eating, everyone partook in the ring of dance. After each song the girls could be seen catching their breath only to be surprised by another song starting. But as if compelled by duty, they gladly resumed dancing despite any fatigue.
In the 21st century, It’s interesting to see so much traditional culture from a European ethnicity still so intact. When most people think European, they think modernity, shopping malls, electric cars. They don’t think traditional clothing and communal dancing. Despite all the conflict that the Balkan peoples have endured, it’s absolutely remarkable to see that their culture has survived.