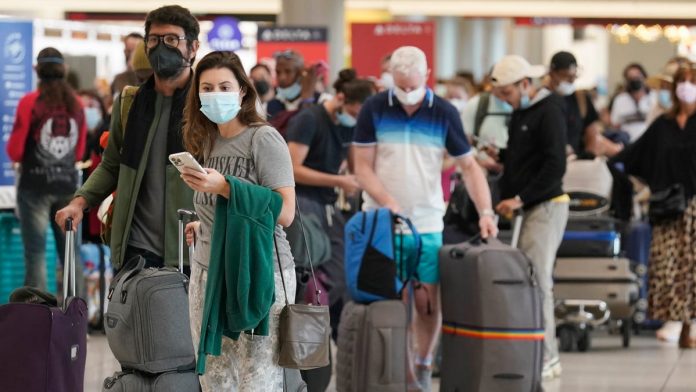 COVID-19 vaccine turns one, so here’s what to watch in the future

It’s the one year anniversary of the first COVID-19 vaccine, so what’s next for researchers? Here are some things to watch for the vaccine’s future.

The nation’s population growth has dipped to its lowest rate ever as a result of the ravages of the COVID-19 pandemic, according to figures released Tuesday by the Census Bureau.

It’s the first time since 1937 that the U.S. population grew by fewer than 1 million people and the lowest growth since at least 1900, when the Census Bureau began population estimates.

Population growth has been slowing for years due to lower birth rates, decreasing international migration and rising mortality rates from an aging population.

“Now, with the impact of the COVID-19 pandemic, this combination has resulted in an historically slow pace of growth,” said Kristie Wilder, a Census demographer.

Also in the news Tuesday:

►In Chicago, anyone 5 years or older must show proof of vaccination starting Jan. 3 to dine indoors, use gyms, or visit entertainment venues where food or drink are being served, Mayor Lori Lightfoot announced Tuesday.

►Minnesota Gov. Tim Walz, his wife, Gwen, and their 9th grade son, Gus, have all tested positive. Gov. Walz said all were vaccinated and that he and his wife have no symptoms while his son has “sniffles.”

►Massachusetts Gov. Charlie Baker announced Tuesday he will activate up to 500 members of the National Guard to support understaffed hospitals facing a surge of COVID-19 patients and to bolster non-emergency medical transportation needs.

►Britain will spend $1.3 billion to help the hospitality industry survive the onslaught of the omicron variant, bowing to days of pressure from pubs, restaurants and other businesses that have seen their income plunge amid public health warnings.

What we’re reading: As COVID-19 rates spike in a time of omicron, here’s what you need know to stay safe during the holidays.

Keep refreshing this page for the latest news. Want more? Sign up for USA TODAY’s free Coronavirus Watch newsletter to receive updates directly to your inbox and join our Facebook group.

President Joe Biden told Americans Tuesday that COVID-19 vaccines and third shot boosters provide strong protection against the omicron variant of the coronavirus. Vaccines, medical supplies and knowledge about COVID-19 have put the country in a much better place now than in March 2020, Biden said.

“We’re prepared today for what’s coming. In March 2020 we were not ready,” Biden said.

The president recognized that Americans have concerns of visiting loved ones for the holidays, given the rapid spread of omicron. Biden stressed booster shots and vaccines for children, including for 5-11 year-olds.

“People with booster shots are highly protected. Join them,” he said.

The president outlined plans to roll out thousands of additional COVID-19 testing sites, and a federal government purchase of half a billion at-home rapid tests. Americans will not be able to request the at-home tests online until January, meaning they can’t access the kits before millions are expected to travel for Christmas.

White House press secretary Jen Psaki said the federal government is still working through details of the program, including whether some groups would be prioritized.

The Biden administration hopes to make at-home tests an insured expense and possibly expand access to free tests for the uninsured.

“It’s a lot better than it was and we’re taking steps to make it easier to get tested and tested for free,” the president said.

New York Mayor-elect Eric Adams postponed his inauguration ceremony, scheduled for Jan. 1 indoors at Brooklyn’s Kings Theatre. Adams, who will still become mayor that day, said the ceremony would be rescheduled for a later date “to prioritize” the health of attendees, staff and reporters.

“It is clear that our city is facing a formidable opponent in the omicron variant of COVID-19, and that the spike in cases presents a serious risk to public health,” Adams said.

Mayor Bill de Blasio said he hopes to make a decision by Christmas on whether the iconic Times Square New Year’s Eve celebration will take place.

Americans preparing to spend time with family and friends this holiday season don’t need to cancel plans, despite the latest infections surge, if they are vaccinated and boosted, Dr. Anthony Fauci said Tuesday.

Fauci, making the rounds of the morning news shows, acknowledged the alarming surge driven by the omicron variant. Omicron is now the dominant version of the coronavirus in the U.S., accounting for 73% of new infections last week.

“If we have a larger number of people getting infected, but the degree of severity is very, very low, that would be very important,” Fauci said. “If you just count the numbers of infections, you may get a misrepresentation as to what is actually going on.”

Across the country, school districts and families are stumbling toward the finish line of a punishing semester.

At some points, nearly all schools appeared back to normal with daily, in-person instruction. COVID-19 exposures sent kids and staff home to quarantine. Teachers battled student misbehavior, from low-level defiance to more fights, threats and gun violence. Staffing shortages shot up. Parents waged their own arguments over race, public health and other issues.

And now, omicron. Schools and districts are shuttering and some are preparing to return to virtual instruction.

Dr. Laolu Fayanju, regional medical director at Oak Street Health in Cleveland, says it’s too soon to confirm the growing narrative that the omicron variant is more infectious but less dangerous than other forms of the coronavirus.

Fayanju cited a recent study from researchers at the Imperial College of London that looked at data from people who tested positive in the U.K. between Nov. 29 and Dec. 11 – and found no evidence the omicron variant is milder than delta. Even if the variant causes slightly milder symptoms, but is much easier to spread, and it has the capability of partially evading defenses in the immunized, “we are not out of the woods,” he said.

“The description of the omicron variant being mild as compared to other variants is not merely a myth, but a dangerous and potentially disastrous framing that we need to abandon,” Fayanju said.

As COVID-19 cases surge, Americans are wondering how to approach the holidays and safely travel and gather with friends and family. The pace of new cases in the U.S. is up 41% compared to a month ago, according to a USA TODAY analysis of Johns Hopkins data. For much of December, cases appeared to hover around 120,000 but have recently jumped to 140,000 a day.

Still, people who are fully vaccinated do not need to quarantine after contact with someone who had COVID-19 unless they develop symptoms, the Centers for Disease Control and Prevention says. However, they should still get tested five to seven days after their exposure and wear a mask in indoor public settings for 14 days following exposure or until they get a negative test result. For more tips, read more here.

California is poised for a surge in new coronavirus infections sweeping the nation, but experts are hoping the state can avoid another wave of crippling restrictions. California has fared far better than many other states so far, with areas in the Midwest and Northeast seeing the biggest surge in cases and hospitalizations amid frigid temperatures that have kept people indoors. And the state ranks near the top in percentage of vaccinated residents. Thus the nation’s most populous state could avoid the worst scenario – spikes in hospitalizations and deaths.

“It’s a highly transmissible respiratory virus and people are going to get it. And they are going to get it every winter,” said Dr. Monica Gandhi, a professor of infectious diseases at the University of California, San Francisco. “We have to go toward measuring our true success with a disease, which is how we’re doing with hospitalizations.”

Although details about the omicron variant are still sketchy, a picture is starting to emerge – and it’s not all bad news. So far, it’s clear that omicron is highly contagious – roughly twice as contagious as delta and four times more than the original virus. Experts worry that even if it’s less virulent, which isn’t yet clear, it could still cause enough hospitalizations to overwhelm health care systems here and abroad.

But this is not 2020. Back then, only a handful of people on earth had been exposed to the SARS-CoV-2 virus that causes COVID-19. Everyone’s immune system was unprepared. And now we have vaccines.

“I think we should reassure people that if they’ve been vaccinated with two doses or naturally infected, they’re likely protected against serious illness,” said Dr. Paul Offit, a pediatric infectious disease expert and director of the Vaccine Education Center at Children’s Hospital of Philadelphia.

A Royal Caribbean International ship, Odyssey of the Seas, briefly returned to port to disembark a passenger with COVID-19 one day after departing from Fort Lauderdale,

The cruise had set out Saturday on an eight-night itinerary from Florida before returning Sunday. The passenger and his family disembarked and there were “no additional close contacts,” said Lyan Sierra-Caro, spokesperson for Royal Caribbean.

“The guest, who was symptomatic prior to boarding but did not notify us, reported to the medical center and subsequently tested positive for COVID-19,” Sierra-Caro told USA TODAY. “He and his close contacts were quarantined (aboard the ship) and disembarked in Ft. Lauderdale to return home.”