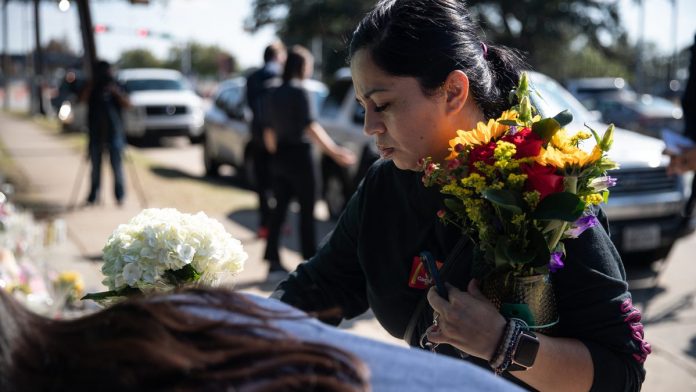 Astroworld Festival: ‘It started off like a normal festival …’

An eyewitness from the Astroworld Festival in Houston, Texas recounts the tragic scene that left at least 8 dead.

HOUSTON — Mourners and local leaders gathered in a downtown church Sunday evening to remember the eight people who died and dozens hospitalized during the fatal stampede at the Astroworld Festival Friday.

The Rev. Paul Felix led around 20 attendees in prayer at Annunciation Catholic Church and highlighted how many people sprung into action at the festival to help those around them.

Brenda Guzman and her partner, Charles Gamez, attended the vigil after attending Astroworld on Friday. They didn’t know any of those who died at the concert but felt compelled to pay their respects, Gamez said.

Guzman, the mother of a 2-year-old, said she feels for families who lost a loved one.

“I haven’t really been myself since everything has happened,” she said. “I’m still affected by it.”

Thank you to those who came to tonight’s beautiful vigil and who are remembering the victims in different ways, sharing stories, leaving flowers outside NRG Park. Harris County is with the families of those we lost. pic.twitter.com/OAlV7AyGx4

In an interview with USA TODAY after the service, Hidalgo said she’s still carefully reviewing the security and medical plans filed in preparation for Astroworld Festival and had a growing list of questions, including who approved the plans and whether or not they were appropriate for the number of people who attended.

For now, however, she said she was focused on those who lost loved ones at the show.

“We have to focus right now on honoring the victims, on remembering them,” Hidalgo said. “We recognize this goes beyond Harris County.”

More than 50,000 people were in attendance at the music festival Friday when performer Travis Scott took the stage, causing the crowds to surge toward the stage at NRG Park and crushing concertgoers. A criminal investigation has been launched to look at where things went wrong at the festival, which first started in 2018.

Victims ranged in age between 14 and 27. Twenty-five people were taken to a hospital, including a 10-year-old who was in critical condition, officials said.

Houston Mayor Sylvester Turner told CNN’s Pamela Brown on Sunday that his team met to begin reviewing what happened at the concert. The investigation “will take weeks, if not longer,” he said.

Over the weekend, the first three of what could be many lawsuits were filed, including one in state court in Houston on behalf of a man injured in the crush of people. Attorneys for Manuel Souza sued Scott, Live Nation, the show’s promoters, and others, saying they were responsible.

“I am absolutely devastated by what took place last night,” he wrote on Twitter. “My prayers go out to the families and all those impacted by what happened at Astroworld Festival. Houston PD has my total support as they continue to look into the tragic loss of life.”

On Sunday, a line of concertgoers gathered at a gate to the festival grounds to retrieve lost items — cell phones and keys — lost in the mayhem of Friday night’s concert. Some laid flowers at a nearby memorial to those killed. Others recounted the panic and pain of being wedged into crowds so tight that it was impossible to move or, sometimes, breathe.

A team of handlers with therapy dogs walked through the line, encouraging people to pet them.

Ian James, 25, flew in from Los Angeles to attend the concert. The event had special meaning for James, who grew up in Houston and remembered when the grounds was the actual Astroworld amusement park.

He said he arrived early enough to the Scott show to maneuver to a good spot close to the stage — a move he quickly regretted. As the performer took the stage, bodies slammed against him, as security guards frantically tried to pull out those in trouble.

“Every seven seconds, it was like trucks were hitting you from behind,” James said. “It seemed like the entire set they were just pulling people out.”

He said security seemed completely overwhelmed by the magnitude of people. Still, James, along with several others at the memorial Sunday, said he doesn’t blame Scott.

“I like to believe he supports the youth, he looks out for the kids,” he said. “He was trying to give them an escape from this troubled reality we’ve been living in … There’s no way he could have known.”