A Great day for the Baseball Hall of Fame

Vladimir Guerrero was the third Dominican player elected to the Hall of Fame. He noted that Sunday, July 29 was Father’s Day in the Dominican Republic.

Trevor Hoffman finished his career with 601 saves, second on the career list to Mariano Rivera with 652.

Alan Trammell revealed he was tutored by his mother.

Jim Thome, who finished his career with 612 home runs, spoke of the importance of treating all people with respect.

Chipper Jones gave his speech with his wife, Taylor by his side.

Jack Morris was a starting pitcher for 18 seasons and played on four World Series championships.

Jack Morris and Alan Trammell were elected to the Hall of Fame by Modern Baseball Era committee in December. 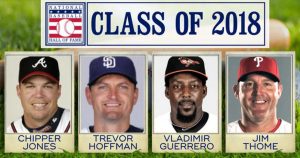 After 5 years of retirement, any Major League Baseball player with 10 or more years of experience who passes a screening committee is allowed to be on the Hall of Fame ballot.

The ceremony was held at the Clark Sports Center. Fifty-three thousand people were in attendance. It is held every year at the end of July in Cooperstown, NY.

The Baseball Hall of Fame Ceremony is something every sports fan should attend at least once in their lifetime.