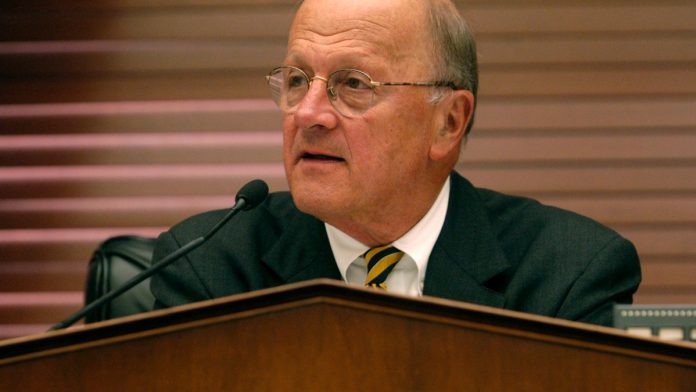 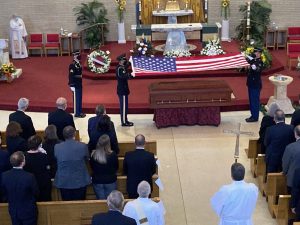 The Honorable Sherwood L. Boehlert passed away on September 20, 2021. Former Congressman Boehlert’s funeral took place on September 27, 2021 at Our Lady of Lourdes Church.

The following is the Homily-Eulogy which was delivered by Fr. Paul Drobin at his Funeral Mass.

Dear Public Servants, members of the Executive, Legislative and Judicial Branches of our Cherished Democracy- especially the Legislative branch; our past and present members of Congress.

Dear Parishioners, Members of many Denominations Congregations, Faith Communities, Colleagues, here and out there.

Most especially, Dear Marianne, dear Boehlert family, immediate and extended, and vicarious, such as I, and such as we.

Thank you for this honor, and this privilege. I am most grateful.

“For everything there is a season and a time or every purpose under heaven.”

The book of Ecclesiastes, the Prophet Qoheleth, the artistry of Pete Seeger and The Byrd’s.

There is no doubt that today, September 27th is a time of sorrow and sadness, not as acute as it was September 20th, one week ago, nevertheless, sad. It is also a time of profound gratitude for Sherwood L. Boehlert, a Dear Husband, a Beloved Father and grandfather, an esteemed and loyal friend, a consummate gentleman, an exemplary and inspiring Congressman. What a good guy, our Beloved Sherry, sartorial in dress, charming in disposition.

The year was 1962, 59 years ago. I was a fledging seminary student at the Catholic University of America in Washington, D.C. Sherry was the Chief of Staff for the Honorable Alexander Pirnie, our Congressman. How welcoming, how engaging he was. “Come to our office anytime. Mi Casa tu Casa,” he said. “Constituents, constituents, Constituents,” he exclaimed.

He was recent graduate of Utica College. How proud he was, the P.R. and J Department. I wanted to say: “P.B. and J.” Public Relations and Journalism. He said, however, that his best preparation came from being a waiter. You know people’s propensities and proclivitles, their likes and dislikes. Often times you can “make their day.”

From Congressman Pirnie, to Congressman Mitchell, back home to Oneida County as County Executive back to Washington in 1982. 12 Terms in Congress, 24 years, 1982-2006.

What a legacy. What accomplishments. What achievements. We need not look very far. Come with now. Down Barton Avenue. Right on Sunset Ave. towards Burrstone Road, don’t forget to wave at the Fire Station on Shepherd Place, how he loved Firefighters, Responders, Murnane Field on the left, Donovan Stadium and his Blue Sox. How he loved the Blue Sox. He said to me: “Father come sit with me,” How we cheered.

West on Burrstone Road right on Champlin to Utica College. There she stands, welcoming all, the Sherwood L. Boehlert Residence Hall and Conference Center.

That is not all. DFAS, the Defense Finance and Accounting Services, thanks to Congressman Boehlert as well.

Incidentally, it was a that very place that Sherry bade farewell to his Congressional responsibilities in 2006. He cited the then renowned New York Yankee pitcher Roger Clemens. He said: “It’s time. It’s time.”

I hope that as you drove you had the windows down to let in some fresh air, clean pure, refreshing invigorating. Remember the Clean Air Act in 1990. The Clean Air, pure water, particularly his beloved Adirondack lakes, rivers, and streams. Thanks to Sherry. No more acid rain.

On one of his environmental excursions/explorations, he visited Antarctica. When he returned he was eager to show us some pictures, not so much of the glaciers, although they were important. Rather of a little chapel on top of the ice sheet. He said: “We went to Mass there.” He never missed, he did not wear religion on his sleeve. He lived it in his heart.” 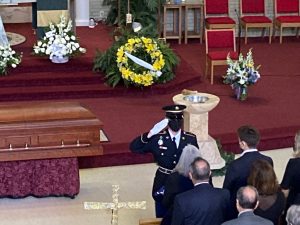 Two and ½ weeks ago I made my last visit to Sherry. I did not know it would be my last. I ministered the Sacrament of Anointing and prayed the Lord’s Prayer: “Thy Kingdom come, thy will be done. give us this day……” Sherry’s lips began to move in synch with my words. He was such a spiritual man.

“For everything there is a season and a time for every purpose under heaven.”

Sherry was “A Man For All Seasons” who had time for every person under heaven.

Can you hear Jesus’ words: “Come my Beloved, my Devoted, My Public Servant.; Enter the Kingdom prepared for you from the foundation of the world.”

With much love and gratitude.  Father Paul. 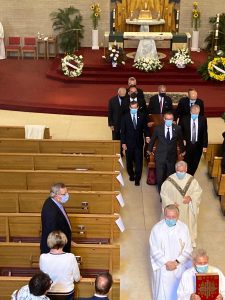 Editor’s Note: It should be noted that as former Congressmen Anthony Brindisi and Michael Arcuri served as paul bearers, Congresswoman Claudia Tenney was seen leaving the church not half way through the service. CHL