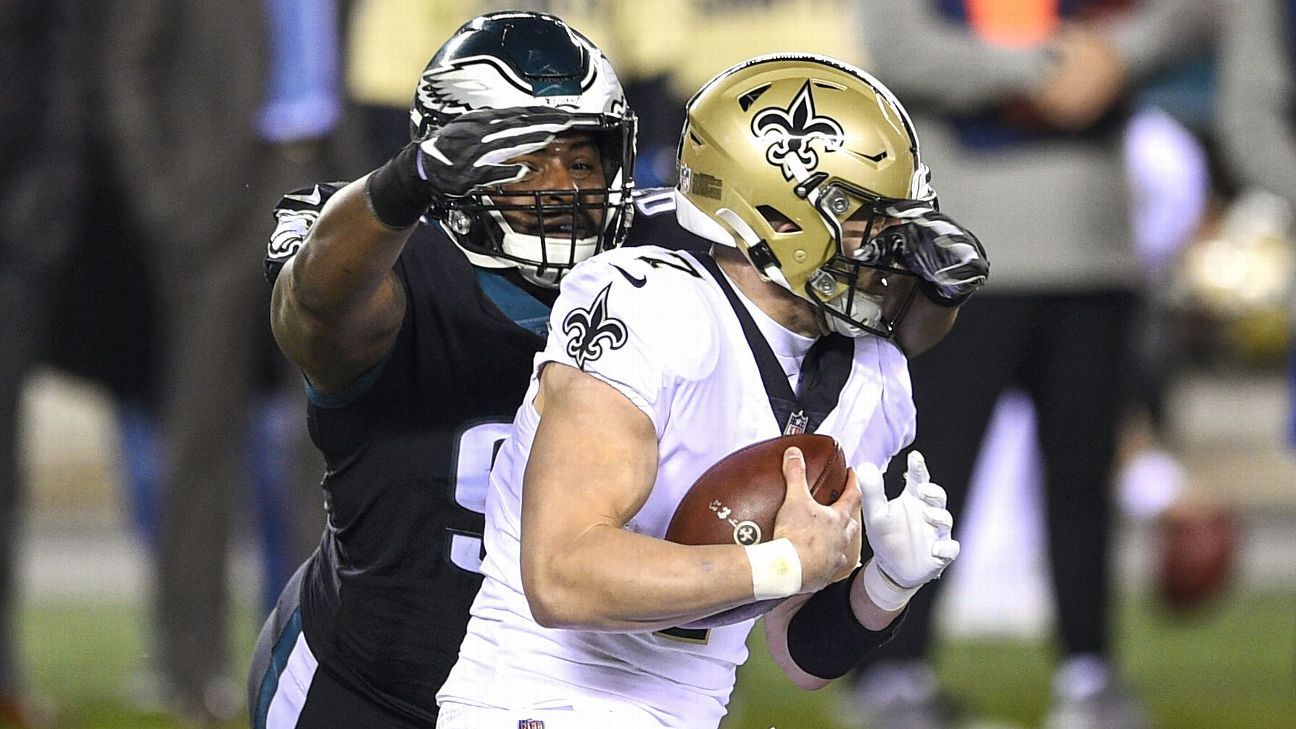 The New Orleans Saints came crashing back down to earth in Philadelphia on Sunday.

Their nine-game win streak was snapped with a 24-21 loss to the Philadelphia Eagles after they trailed 17-0 at halftime. Taysom Hill’s perfect record as a NFL starting quarterback — which had been 3-0 — is now blemished.

And most remarkably, New Orleans’ NFL-record streak of 55 games without allowing a 100-yard rusher, including the playoffs, was squashed twice. Eagles running back Miles Sanders ran for 115 yards and two touchdowns on 14 carries — including an 82-yard TD run in the second quarter. And rookie quarterback Jalen Hurts ran for 106 yards on 18 carries in his debut as Philly’s starter in place of demoted veteran Carson Wentz.

Saints quarterback Taysom Hill was sacked five times and turned the ball over twice in the loss to the Eagles. AP Photo/Derik Hamilton

Maybe this flop can be chalked up as just one of those days. After all, it was the Saints’ third straight road game — and they did show some fight to make it close in the second half, almost coming up with a late onside kick to make things even closer.

However, the Saints (10-3) can’t really afford any of those days since they would lose a tiebreaker for the NFC’s No. 1 seed to the 10-3 Green Bay Packers. And life ain’t gonna get any easier next week when they host the Kansas City Chiefs.

“Clearly we didn’t play one of our better games today. That was obvious. … We didn’t do a good enough job as coaches, starting with myself, coming out and getting ready,” Sean Payton said of a game that multiple Saints described as “flat” or “not our standard of football.”

“We should have played better in the first half. And I gotta take some blame for that as a quarterback,” said Hill, who threw for a career-high 291 yards with two TD passes but lost two turnovers. “This one does sting a little bit because we knew what was at stake, and we worked really hard to put ourselves in the situation to be in the driver’s seat, where we could control our own destiny.”

Troubling trend: The jury is still out on whether Hill can be an effective starting quarterback after four starts. But his fumbles have become an obvious concern. Hill has now fumbled the ball 10 times this season, losing five of them, after dropping the ball while being sacked on a fourth-and-2 try from the Eagles’ 42-yard line early in the fourth quarter.

That wasn’t Hill’s most egregious fumble, since it wouldn’t have done him much good to tuck the ball away in that situation. But it was disturbing nonetheless since his fumbles had already become a key talking point last week.

Hill also threw an interception on a tipped pass in the second quarter as he continued to do some good things and some bad things as a thrower. He ran the ball five times for 33 yards.

Frankly, four games into Hill’s starting career, we don’t know all that much more about his potential than we knew a month ago. He has shown flashes of unique ability as both a runner and thrower, and he made some big plays during Sunday’s second-half rally. But he still needs more polish before he can secure a full-time gig.

Troubling trend, Part 2: Saints kicker Wil Lutz has now missed three straight field goal attempts for the first time in his career, dating to last week — including a 45-yarder in the first half and a 57-yarder just after the two-minute warning. Lutz was a Pro Bowler last season, so there’s no reason to expect this trend to continue. But his slump has obviously come at a bad time after a three-point loss.

Pivotal play: Sanders’ 82-yard TD run was a stunner. The Saints had the NFL’s No. 1-ranked rushing defense heading into this game, allowing just 76.1 yards per game this year. And they wound up allowing 246 rushing yards to the Eagles — their most in a game since 2014.

The TD run was well blocked across the line. Saints safety Malcolm Jenkins had a chance to hit Sanders for a short gain, but Sanders shoved him aside with a perfectly placed stiff-arm on the crown of Jenkins’ helmet before breaking free into the open field.

“For me as a post safety, whatever happens up front, it doesn’t really matter. It’s my job to get him down and make sure a bad play doesn’t turn worse. So that touchdown is on me,” said Jenkins, who insisted the Saints will try to make sure one dud doesn’t knock them off course.

“Obviously frustrating, but for us our goals are very much still alive in front of us, and a really good opponent coming up next week,” Jenkins said. “So it’s really about making sure we make the corrections and show up better next week.