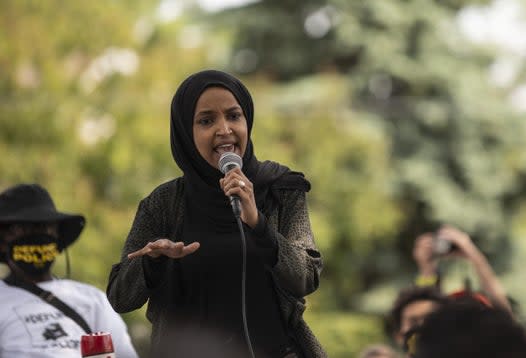 Rudy Giuliani has once again posted misinformation about Rep. Ilhan Omar on social media, sharing a meme that falsely claimed the congresswoman was seen at a terrorist training camp.

The president’s personal lawyer tweeted a debunked meme that included a photo of a woman holding a gun, along with a caption that falsely claimed the woman was Ms Omar (D—Mn).

The meme spread across far-right corners of the web last year, despite the photo having been taken three years before the Somali-American congresswoman was born.

According to PolitiFact, the image was captured on a military training campus in 1978 and showed “a woman recruit of the Somali Army” — not Ms Omar, who born in 1981 in Mogadishu, and whose family later sought asylum in the US.

A caption included in the meme Mr Giuliani shared on early Wednesday morning read: “Here is your precious Muslim congresswoman a Al’ Qaida training camp in Somalia. She is trying to get this picture blocked.”

Posting the meme to his Twitter page with more than 700,000 followers, Mr Giuliani wrote: “Can we get rest of this picture?”

Ms Omar, a progressive firebrand and freshman Democrat on Capitol Hill, has become a subject of frequent attacks from Donald Trump, his allies and conservatives in Washington. Those attacks have often included misleading information about her religion and life story.

In March, Mr Giuliani shared a misleading video clip of the congresswoman and claimed she took classes in terrorism.

“What is she laughing at in recalling her terrorism classes?” he tweeted. “This represents the future of the Democrat Party? God help us.”

In reality, Ms Omar studied political science and international relations at North Dakota State University. She has discussed a class she took at the school in which students learned about the “ideology” of terrorism.

In a longer, unedited video from the 25-minute conversation with Ms Omar, who had not yet been elected to the House of Representatives, she told an interviewer: “When you have an individual in a Western society that goes on and does commit mass murder — we have mass shootings that happen constantly here — we investigate that person and what has driven them to commit this act.”