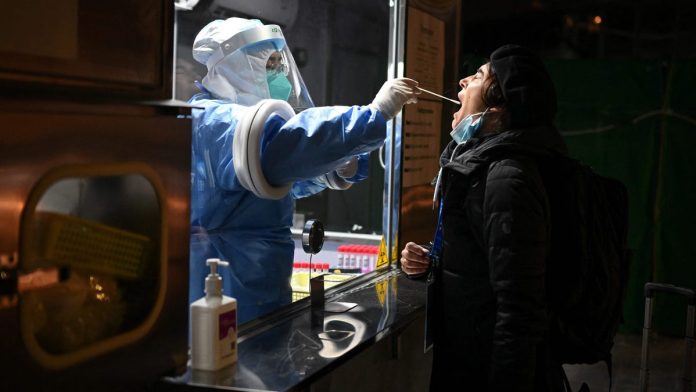 According to researchers’ report on bioRxiv.org, the omicron variant’s high “environmental stability” might have helped it spread so rapidly.

Pfizer and its partner BioNTech are expected to request FDA emergency-use authorization for their COVID-19 vaccine for children under 5, the Washington Post and New York Times reported.

The request could happen as soon as Tuesday and the authorization could come by the end of February, multiple people familiar with the discussions told the Times and the Post.

COVID-19 cases among children have spiked severely in 2022 with the omicron variant, recording over 3.5 million child cases in January – triple the peak level of delta’s wave in 2021, according to the American Academy of Pediatrics.

The lower dose given to 2- to 5-year-olds didn’t produce as much immune protection as shots given to other age groups in early tests, Dr. Alejandra Gurtman, vice president of vaccine clinical research and development for Pfizer said at a meeting of the Advisory Committee on Immunization Practices last month.

Kids ages 6 months to 2 years, however, did experience an adequate immune response at that 3-microgram dose, Gurtman said.

The company hopes a third dose of the vaccine eight weeks after the first two shots will provide the desired effectiveness, but those results won’t be available until late March or early April.

►Organizers for the 2022 Beijing Olympics reported 71 new cases of COVID-19 over the weekend, bringing the total to almost 250 cases linked to the Winter Olympics as the opening ceremony nears.

►The biotechnology company Novavax announced Monday that it had submitted a request to the Food and Drug Administration for emergency use authorization of its protein-based COVID-19 vaccine.

►Washington State filed a lawsuit Monday against a nationwide coronavirus testing chain that operated more than 300 locations across the U.S., claiming it provided “invalid, false and delayed” COVID-19 test results to Washingtonians.

►COVID-19 hospitalizations continued to plummet in New Jersey over the weekend and are now less than half of what they were at their peak on Jan 11.

Today’s numbers: The U.S. has recorded more than 74.9 million confirmed COVID-19 cases and more than 886,000 deaths, according to Johns Hopkins University data. Global totals: More than 378.8 million cases and over 5.6 million deaths. More than 211 million Americans – 63.8% – are fully vaccinated, according to the Centers for Disease Control and Prevention.

What we’re reading: While travel is possible to most countries, vacationers can still expect to find COVID-related mandates in many beach towns. USA TODAY’s Bailey Schulz reviews some of the most popular beach destinations’ entry requirements and COVID-19 restrictions ahead of spring break 2022.

Keep refreshing this page for the latest news. Want more? Sign up for USA TODAY’s free Coronavirus Watch newsletter to receive updates directly to your inbox and join our Facebook group.

The United States reported almost exactly as many cases of COVID-19 in January as it did in all of 2020.

The country reported 20,148,614 cases in January, just below 2020’s complete tally of 20,193,451 cases in all of 2020, a USA TODAY analysis of Johns Hopkins University data shows. The month’s case count was more than three times higher than the previous record month for cases.

The wildly contagious omicron variant also put record numbers of people into hospitals in January, even though on a per-case bases infections are milder.

In January the country reported a record 798,190 hospital admissions to patients with confirmed or suspected COVID-19, a USA TODAY analysis of a U.S. Health and Human Services database showed. The country also reported more COVID-19 patients in hospital beds at one time than ever before, with 161,785 reported Jan. 19.

But the thunderous omicron wave is receding. The pace of new cases has fallen some 44% since mid-January’s peak, bringing them to an average of about 450,000 every day, or more than five cases reported every second.

Tens of thousands of tons of medical waste from the COVID-19 pandemic are straining waste management systems worldwide and threatening human and environmental health, according to a new World Health Organization report released Tuesday.

The findings are based on estimates on the approximately 87,000 tons of PPE requested from March 2020 to November 2021 to support countries’ COVID-19 response and delivered through the United Nations.

Materials from test kits and syringes, needles and boxes from the vaccine rollout have also created a tremendous amount of waste – far more than hospitals regularly handled before the pandemic.

“Today, 30% of health care facilities (60% in the least developed countries) are not equipped to handle existing waste loads, let alone the additional COVID-19 load,” the WHO said.

Workers at facilities unable to manage the extra waste are more susceptible to “needle stick injuries, burns and pathogenic microorganisms,” according to the report, and surrounding communities are more likely to suffer from “contaminated air from burning waste, poor water quality or disease carrying pests.”

The report lays out possible solutions, such as using “eco-friendly packaging and shipping, safe and reusable PPE (e.g., gloves and medical masks), recyclable or biodegradable materials” and “investment in non-burn waste treatment technologies.”

A third dose of the Pfizer-BioNTech vaccine or the Moderna vaccine has been extremely effective at preventing severe disease from the omicron variant, which accounts for virtually all the COVID-19 infections in the USA.

The Centers for Disease Control and Prevention authorized a fourth dose at least five months after a third for immunocompromised people – such as transplant recipients, cancer patients receiving certain treatments and people on certain medications.

The CDC has not said whether or when it would consider allowing healthy people to get a fourth shot, nor has the Food and Drug Administration considered authorizing one.

Dr. Paul Offit, a vaccine expert at Children’s Hospital of Philadelphia, said to limit severe disease, the best approach would be to get more people vaccinated, not worry about giving four or more doses to people who are largely protected.

“We’re focusing on the wrong group,” Offit said. “If you really want to have an impact on this pandemic, vaccinate the unvaccinated.”

In January, the San Francisco Department of Public Health sanctioned a second booster dose for everyone who received Johnson & Johnson as their first shot, making it the only known place in America where a third shot is officially allowed for those with normal immune protection.

San Francisco’s Department of Health described the third dose as “an accommodation” based on recent studies that found a third dose of an mRNA COVID-19 vaccine, such as from Pfizer and Moderna, is needed to induce adequate protection as immunity wanes. The third dose reduces symptomatic infection, hospitalization and severe outcomes from the omicron variant.

The second booster is only available to residents of San Francisco or people who got their initial J&J vaccination there.

In a release, the department said while the research so far has focused on people whose vaccines were either from Pfizer or Moderna, “We believe that similar studies in persons whose primary series was a single J&J vaccine dose would yield similar results showing that three doses are needed for optimal protection.”