By: Ted Rajchal: Voices of Polonia 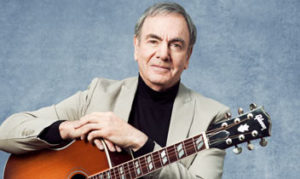 :Background
One of the world’s best-selling artists of all time, he has sold nearly 200 million records world-wide since the start of his career in the 1960’s. With 38 songs in the Top 10, he is the second most successful artist in the history of the billboard adult contemporary Top 10 charts. His songs have been covered internationally by many performers from a variety of musical genres.
Early Life and Education

Neil Diamond was born in Brooklyn New York and is from Polish-Jewish descent. His parents were Rose Rapaport and Kieve Diamond, a dry-goods merchant. He grew up in several homes in Brooklyn, having also spent four years in Cheyenne, Wyoming, where his father was stationed in the army. In Brooklyn he attended Erasmus Hall High School and was a member of the freshman chorus and choral club along with classmate Barbara Streisand. They were not close friends at that time, Diamond recalls:”We were two poor kids in Brooklyn. We hung out in the front of Erasmus High and smoked cigarettes.”After his family moved, he then attended Abraham Lincoln High School, and was a member of the fencing team. For his 16th birthday, he received his first guitar. When he was 16, and still in high school, Diamond spent a number of weeks at Surprise Lake Camp, a camp for Jewish children in Upstate New York, when folk singer Pete Seeger performed a small concert. Seeing the widely recognized singer perform, and watching other children singing songs for Seeger that they wrote themselves, had an immediate effect on Diamond, who, then became aware of the possibility of writing his own songs. “And the next thing, when I got back to Brooklyn, I started to take lessons and almost immediately began to write songs,” he said. He adds that his attraction to song writing was the “first real interest” he had growing up, besides helping him release- his youthful “frustrations”. Diamond also used his newly-developed skill at writing lyrics to write poetry. By writing poems for girls he was attracted to in school, he soon learned it often won their hearts. He spent the summer following his graduation as a waiter in the Catskills resort area. There he first met Jaye Posner, who would, years later, become his wife. Diamond next attended New York University as a pre-med major on a fencing scholarship. His skill at fencing made him a member of the 1960 NCAA men’s championship team. He was often bored in classes and found writing song lyrics more to his liking. He began cutting classes and taking the train up to Tin Pan Alley, where he tried to get some of his songs heard. A local music publishing house offered him a 16-week job writing songs for $50 a week, and he dropped out of college to accept it.

After his 16 weeks at Sunbeam Music were up, he was not rehired and then began writing and singing his own songs. “I never chose songwriting,” he said, “It just absorbed me and became more and more important in my life.” During those lean years, he was only able to sell about one song a week, barely enough to survive on. However, the privacy he had above the Birdland Club allowed him to focus on writing without distractions; as he explained, “something new began to happen. I wasn’t under the gun, and suddenly interesting songs began to happen, songs that had things: none of the others did.” Among them were “Cherry, Cherry” and “Solitary Man.” “Solitary Man” was the first record that Diamond recorded in his own name that made the charts. It remains one of his personal all-time favorites, as it was autobiographical about his early years as a songwriter, even though he failed to realize it at the time. His first success as a song writer came in November, 1965 with “Sunday and Me”, a top 20 hit for Jaye and the Americans. Greater success as a writer followed with “I’m a Believer”, “A Little Bit Me, a Little Bit You”, “Look Out (Here Comes Tomorrow)”, and “Love to Love”, all performed by The Monkees. Diamond wrote and recorded the songs for himself, but the cover versions were released before his own. Diamond began to gain fame not only as a singer and performer, but also as a songwriter. “I’m a Believer” became a gold record within two days of its release, and stayed at the top of the charts for seven weeks, making it the popular music song of the year in 1966.

Career Moving On
In 1970 he moved to Los Angeles. After ”Brother Love’s Travelling Salvation Show” in February, 1969, his sound mellowed, with such songs as “Sweet Caroline” (1969),” “Holly Holy” (1969), “Cracklin’ Rosie” (1970), and “Song Sung Blue” (1972), the last two reaching No. 1 on the Hot 100. “Sweet Caroline” was Diamond’s first major hit after his slump. Diamond stated in 2007 that he had written “Sweet Caroline” for Caroline Kennedy after seeing her on the cover of Life in an equestrian riding outfit. In 2014 he said in an interview on The Today Show that it was written for his then wife, Marcia. He could not find a good rhyme with the name “Marcia”, and therefore used the name Caroline. It took him just one hour in a Memphis Hotel to write and compose it. The 1971 release “I am…I Said” was a top 5 hit in both the US and UK and was his most intensely personal effort to date, taking upwards of four months to complete. In 1971 Diamond played 7 sold-out concerts at the Greek Theater in Los Angeles. The Outdoor Theater, which was noted for show casing the best of current entertainers, added a stereo sound system for the first time. Diamond was also backed by a 35-piece string orchestra and six backing singers. After the first night, one leading newspaper called it “the finest concert in Greek Theater history. The following August, 1972, he played again at the Greek Theater, this time doing 10 shows. When the show was first announced, all tickets at the 5,000-seat theater sold out. Diamond recalled: “Hot August Night” captures a very special show for me. We went all out to really knock ‘em dead in Los Angeles”. In the fall of 1972 Diamond performed for 20 consecutive nights at the Winter Garden Theater in New York City. The last occasion when that historical theater had staged any one-man shows had been when Al Jolson had performed there in the 1920s and the 1930s. The small (approximately 1,600-seat) Broadway venue provided an intimate concert setting not common at the time, with every performance reportedly sold out. It also made diamond the first rock-era star to headline on Broadway. The review in the New York Times stated: Neil diamond’s one-man show seemed, on the face of it to be a brash idea. One-man shows have traditionally been associated with talents like Judy Garland and Danny Kaye, but Mr. Diamond is clearly a brash young man and one with both a musical track record and the performance macho to bring it off…He needn’t worry about comparisons with the likes of Garland and Kaye.

The Aladdin Hotel & Casino
Diamond was paid $650,000 from The Aladdin Hotel in Las Vegas, Nevada to open its new $10 million theater for the performing arts on July 2, 1976. The show played through July 5, 1976, and drew sold out crowds for the 7,500-seat theater. A “who’s who” of Hollywood attended opening night, ranging from Elizabeth Taylor to Chevy Chase, with Neil Diamond walking out on stage to a standing ovation. He opened the show without music, but rather with a story about an ex-girlfriend who dumped him before he became successful. His lead-in line to the first song of the evening was, “You may have dumped me a bit too soon, baby, because look who’s standing here tonight.”America” was the Story of My Grandparents

He told an interviewer: “It’s my gift to them, and it’s very real to me…in a way, it speaks to the immigrant in all of us. The song “America” was also the one he was most proud of, partly because of when it was later used: national news shows played it when the hostages were shown returning home after the Iran hostage crisis ended; it was played on the air during the 100th anniversary of the Statue of Liberty, and at the tribute to Martin Luther King, Jr. At the Vietnam vets’ welcome home concert, he was asked to perform it live. At that time a national poll found the song “America” to be the number-one most recognized song about America, more than “God Bless America”.
Awards and Honors

He performed at Woburn Abbey on July 2, 1977 to an audience of 55,000 British fans. The concert and interviews were taped by film director William Friedkin, who used six cameras to capture the performance. In January, 1987 Diamond sang the national anthem at the Super Bowl. His “America” became the theme song for Michael Dukakis’s 1988 presidential campaign. In 1992 he performed for President George H.W. Bush’s final Christmas in Washington NBC Special. In 2000 Johnny Cash recorded the album “American III: Solitary Man” and won a Grammy Award for his cover of “Solitary Man.” Home before Dark was released May 6, 2002 and topped the album charts in New Zealand, The United Kingdom, and The United States. On June 29, 2008 Diamond played to an estimated 108,000 fans at the Glastonbury Festival in Somerset, England on the Concert of a Lifetime Tour. Diamond was honored as the Musicales Person of the Year on February 6, 2009, two nights prior to the 51st annual Grammy Awards. Long loved in Boston, Diamond was invited to sing at the July 4, 2009 holiday celebration. On October 13, 2009 he released a Cherry, Cherry Christmas, his third album of holiday music. Diamond’s career spanned 5 decades and ranks as the third most successful adult contemporary artist in history following Barbara Streisand and Elton John. His music covers many genres, such as pop, rock, country, fold, and soft rock. In addition to vocals, he plays guitar and piano. Diamond, a Grammy Award-winning artist, is a member of the rock and Roll Hall of Fame, the songwriters Hall of Fame, and is a recipient of the Sammy Cahn lifetime Achievement Award, one of the highest honors bestowed upon songwriters. These are just a few of the many awards he earned.
Personal Life

Diamond is now a Christian. He was raised in a Hebrew family. He has been married three times. Neil Diamond is more than just a music icon. His singular artistry and talent has left an indelible mark on American culture and has helped shape the sound of popular music for five decades.