Is Mexico’s CONCACAF dominance in jeopardy with so many young 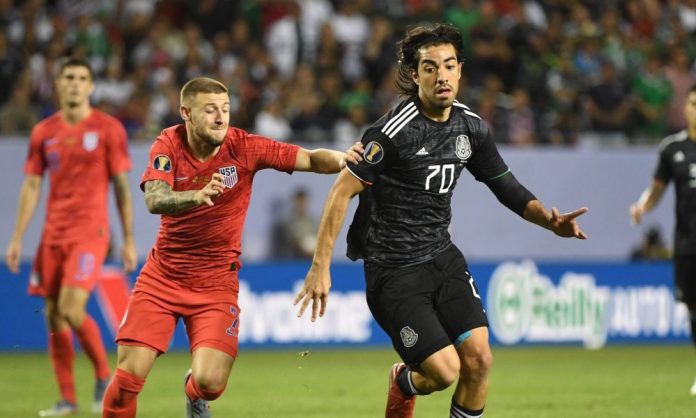 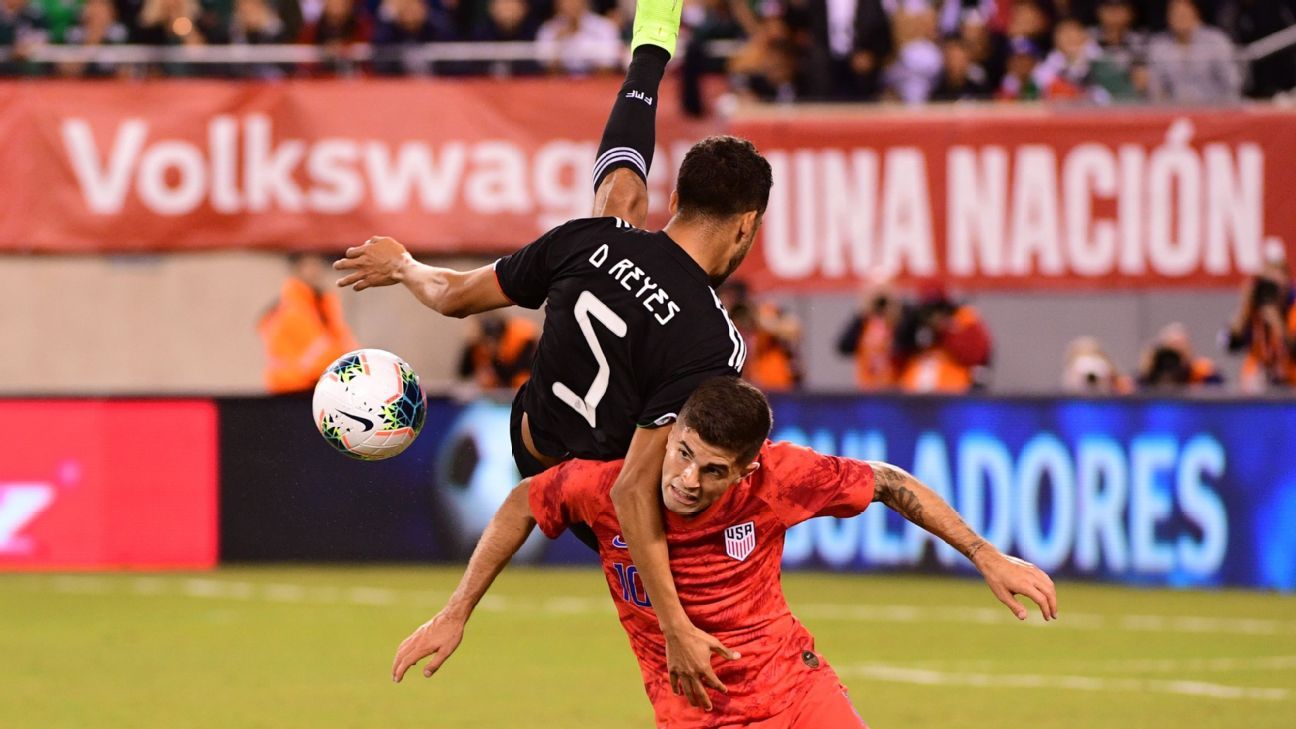 MEXICO CITY — It’s no secret that the United States has a generation of players that is garnering genuine attention beyond the country’s borders. The explosion of U.S. stars at top European clubs has grown in 2020, and the trend hasn’t gone unnoticed in Mexico, either.

– Stream LIVE games and replays on ESPN+ (the U.S. only)

“We can’t deny what is happening in the United States with players in the best leagues and in the best teams in Europe,” Mexico head coach Gerardo “Tata,” Martino said last month when asked about next summer’s Gold Cup, adding that El Tri is still “obligated” to win the tournament.

When the USMNT sent out a tweet after the UEFA Champions League draw boasting about having a record 10 players in the group stage of the 2020-21 tournament, it was quickly pounced upon by the Mexican press.

It’s easy to see why there is a sense of excitement, too.

Weston McKennie signing and starting for Juventus; Sergino Dest moving to Barcelona; Christian Pulisic a mainstay already at Chelsea; Chris Richards starting to get more regular playing time at Bayern Munich; the headline-grabbing development of Giovanni Reyna at Borussia Dortmund; Tyler Adams at RB Leipzig; John Brooks at Wolfsburg; Konrad de la Fuente also at Barcelona; Josh Sargent at Werder Bremen and Timothy Weah at Lille; the United States appears to have a generation that is ready to step up.

“I think everybody feels the excitement,” Barcelona’s Dest said earlier this month. “I think because we have more players that play for big clubs; that’s the reason everybody is excited that we can really achieve something in the World Cup. Everybody has to keep motivated and hungry. I feel like we can do it.

“If we just work hard and work as a team, everything can be achieved. I’m also really excited to see how the team is in the next few years.”

Former Mexico coach Juan Carlos Osorio was often criticized fiercely for stressing that Mexico had to export more players to Europe than it did during his tenure from 2015-18. His theory was that incrementally increasing the El Tri player pool in Europe would give the squad its best chance possible of reaching that “fifth game,” finally bringing to an end the run of seven consecutive round-of-16 exits at the World Cup.

“To the extent that Mexican football exports more players that compete and train with the best, the national team will eventually make that jump in quality,” stated Osorio immediately after the 2-0 loss to Brazil at Russia 2018.

It’s exactly what the United States is starting to manage with their young talent reaching elite teams.

Not the U.S.’s first “Golden Generation”

Should Mexico be concerned that its recent dominance of the CONCACAF region may be challenged? Former Chivas sporting director and Mexico international, Paco Gabriel de Anda, believes not.

“In the case of the United States, it isn’t the first generation and stands out,” Gabriel de Anda said. “They also had a generation with [Michael] Bradley, with Tim Howard, [Clint] Dempsey, [Landon] Donovan, [Jozy] Altidore, so it’s not the first generation to draw attention. The player who is the real deal is Pulisic, but the rest have to win their spots, make their names and be important for their respective clubs.”

“I believe that more than being concerning [for Mexico], it should be an incentive for Mexico to export more footballers,” he continued. “There are some really good Mexican players right now, and there’s nothing to be jealous of the United States about … it’s an extra motivation.”

The young talent for both the U.S. and Mexico should only add more spice to the heated rivalry. Getty

Mexico legend Jared Borgetti added that the young group of players in Europe is a positive for the Stars and Stripes, but that Mexican soccer needs to step up in terms of exporting more of their prospects to Europe.

“Worrying in the sense of knowing that they can beat Mexico? They’ve beaten us on various occasions, in the United States, and even in qualifying they’ve finished above us in the Hexagonal,” said Borgetti. “More than worrying in that sense [of having a ‘Golden Generation’] is what they are doing right and what they are doing wrong in Mexico. I think that’s where it all begins.”

Borgetti added that whereas the spotlight is always on soccer in Mexico, in the United States planning and exporting youngsters occur without as much scrutiny as in Mexico, and access to European Union passports is also a benefit for many of the U.S. players in Europe.

“Is it good what the United States [have done]? Of course, it is — they are trying to get players in the best leagues in the world, and in the future, it’ll bring dividends,” added Borgetti.

Placing more players in Europe doesn’t necessarily translate to a swift transition of power from Mexico to the U.S. in the region. Gregg Berhalter’s U.S. team has so far fared poorly against Martino’s team, losing the 2019 Gold Cup final and then being defeated 3-0 in September 2019 friendly.

In the recent October window, Mexico defeated the Netherlands 1-0 and then drew 2-2 against reigning African champions, Algeria. The team provided a reminder against the Dutch in particular of the attack-minded and entertaining style that’s both attractive and has so far yielded results for Martino, who led Argentina to back-to-back Copa America finals and reached the quarterfinal of the 2010 World Cup with Paraguay.

And while one of Mexico’s ambitions is to hold onto the No. 1 spot in the region, their sights are set a bit higher overall: El Tri is hoping to move as close to the global elite as possible and even secure a ranking inside the first pot for the Qatar 2022 draw.

“The idea is to be in the top eight [in the FIFA rankings],” Mexican federation sporting president Gerardo Torrado said in an interview with ESPN. “The idea is to be among the best teams in the world as the minimum.”

And beneath them, there is another generation of players that reached the Under-17 World Cup final last year and Mexico has been consistently among the elite at various youth levels in international tournaments.

“These generations [in Mexico] are better prepared, they have more experience in international tournaments, in youth systems, the international competition in their [Liga MX teams] and also in national teams,” said Borgetti, adding that what really needs to improve in Mexico is youngsters being given more chances in Liga MX, first and foremost.

The mix of experienced veterans in Europe — names like Guillermo Ochoa, Hector Herrera, Andres Guardado, Hector Moreno, and Raul Jimenez; players like Hirving Lozano, Jesus “Tecatito” Corona, Jesus Gallardo, and Alvarez — along with the best of the younger recruits should see Mexico well-placed for Qatar 2022 regardless of what their northern rivals are doing.

The longer-term issue around why more Mexicans don’t go to Europe has many theories as to the cause — Gabriel De Anda believes the strength of the market domestically in Liga MX makes it more difficult for Mexicans to move to the Old Continent.

“In Mexico, we have an issue that I don’t think happens in other countries, at least on the American continent: In Mexico, players are sold internally in Mexico, and you do business here,” De Anda said. “In Uruguay, Nacional isn’t going to sell a player to Penarol for millions of dollars; in Argentina, River Plate isn’t going to sell a player to another Argentine club for millions of dollars. It doesn’t happen in MLS, either.”

“Mexico has its own market so the teams don’t look abroad,” he continued. “Chivas had Rodolfo Pizarro and sold him for $15 million to Monterrey, Chivas isn’t interested in selling him to the Netherlands or Portugal or Germany. That’s the issue for me; suddenly Santos Laguna sells players to Club America for over $10 million and Cruz Azul buys players from Necaxa for millions, and Chivas buy from Necaxa for millions. That’s why we don’t open up our panorama a little.”

There’s also an alternative narrative at play among the CONCACAF rivals over the next couple of years, one built around the idea that the possible rise of the USMNT will also be good for Mexico in an era likely to be confined to games against CONCACAF opposition from next summer until Qatar 2022.

“I think it’s positive for everyone, for CONCACAF in general,” said De Anda. “It’s good that the level of CONCACAF improves and that there are better players from Costa Rica, the United States, Mexico, Honduras, Canada.”

Watching how CONCACAF’s great rivalry develops leading up to 2022 and then the 2026 World Cup, in North America, promises to be an interesting ride.