Voices of Polonia: Jadwiga of Poland, Queen and Saint 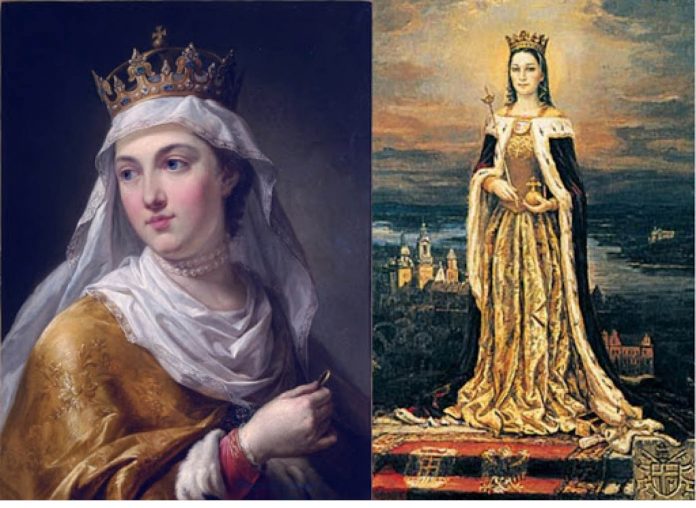 Jadwiga of Poland, Queen, and Saint 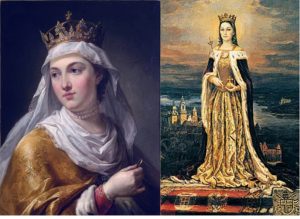 Queen Jadwiga of Poland was the first female monarch of the Kingdom of Poland, reigning from the 16th of October 1384 until her death on the 17th of July 1399.  She was the youngest daughter of Louis, the Great, King of Hungary and Poland and his wife, Elizabeth of Bosnia.  Jadwiga was a member of the Capetian House of Anton, but she had more close forebears among the Polish Piasts, the first historical ruling dynasty of Poland.  In 1997 she was canonized by the Catholic Church as a Saint of the Church.  On the 8th of June 1979 Pope John Paul II prayed at her sarcophagus; and the Congregation for Divine Worship and the Discipline of the Sacraments officially affirmed her beatification on the 8th of August 1986.  The pope went on to canonize Saint Jadwiga in Krakow, Poland on the 8th of June 1997.  One example of a miracle she performed is when  Jadwiga was taking part in a Corpus Christi Day procession, a coppersmith’s son drowned by falling into a river. Jadwiga threw her mantle over the boy’s body, and he regained life.

Jadwiga was born on February 18, 1374, in Buda (presently Budapest).  In her veins flowed the blood of French, Polish, Hungarian, and Bosnian ancestors.  Jadwiga was a tall and beautiful girl with red hair. In Europe, she was famous not only for her beauty but also for wise diplomacy and deep devotion. Besides the Polish and Hungarian languages, she also knew Latin, German, and Italian.  She had a strong personality and confident character, the only woman on the throne of Poland.  Young, beautiful, very smart and she could have everything a soul desired!  She chose the good of her subjects and country, over which she reigned.  This choice gave Poland stability and prosperity for the next few hundred years, but Queen Jadwiga was mainly known for her gentleness, courage, wisdom,  and care for her subjects, the people of Poland.  She had a great concern for politics. The good of her subjects was close to her heart:  she funded many hospitals and churches.  Tied with the construction of one of them was the Carmelite Church of the Blessed Virgin Mary.  There is a legend about this:  A certain day when the queen came to the construction site, she noticed that one of the workers was very sad.  This really moved her and she asked him for the reason for his sadness.  He answered her with his difficult family situation:  His wife, the mother of three children, was very sick and close to death.  Despite his work in construction, he wasn’t able to afford the treatment.  Queen Jadwiga, moved by the man’s misery, leaning over, pulled a slipper from her foot and unfastened from it a golden buckle, which she offered him. In this same moment, her barefoot leaned against a stone covered with lime, leaving an impression of her foot on it.  When she left, the bricklayer noticed the impression and placed it into the wall of the church.  To this day the impression of the foot of  Queen Jadwiga can be admired by all who see it.  Surrounded by wire, it can be seen on one of the corners of the Church Carmelites at Karmelicka, Poland.  Jadwiga was crowned “King” in Poland’s capital, Krakow, on the 16th of October 1384.  Her coronation either reflected the Polish nobility’s opposition to her intended husband, William, becoming king without further negotiation or simply emphasized her status as queen regnant.  With her mother’s consent,  Jadwiga’s advisors opened negotiations with Jogaila, Grand Duke of Lithuania, who was still a pagan, concerning his potential marriage to Jadwiga.  Jogaila signed the Union of Krewo, pledging to convert to Catholicism and promote his pagan subjects’ conversion.  Meanwhile, William hastened to Krakow, hoping to marry his childhood fiancee, Jadwiga, but in late August 1385, the Polish nobles expelled him.  Jogaila, who took the baptismal name Wladyslaw, married Jadwiga on the 15th of February 1386.  Legend says that she had agreed to marry him only after lengthy prayer seeking divine inspiration.  Jogaila, now in Polish-styled Wladyslaw Jagiello, was crowned King of Poland on the 4th of March 1386.  As Jadwiga’s co-ruler, Jagiello worked closely with his wife.

Benefactor of the Academy of Krakow

Queen Jadwiga really cared for her relationship with Jesus and did a lot to bring him closer to her relatives and subjects.  She also cared for the spread of the Word of God, funding a translation of the Holy Bible and the writings of the Fathers of the Church for Wawel Cathedral in Krakow.  She wished that the Lord would be praised there with the psalms without ceasing, so she established a special college of sixteen people who praised God night and day.  To strengthen the fundamentals of the faith in the Kingdom of Poland, she bequeathed her fortune to the renewal and expansion of the impoverished Academy of Krakow.  She obtained the pope’s permission to open a Department of Theology, which greatly hastened evangelization in the whole area of the vast kingdom in the Polish, Lithuanian and Ruthenian lands.  Ruthenia is located on the southern slopes of the eastern Carpathian Mountains bordered by  Poland, Slovakia, Hungary, and Romania. Its people followed the Byzantine Rite.   The department had a great influence on raising the profile of the university, which from then on really counted in Europe and whose revival had great meaning in the history of Poland.  It is here (from the sixteenth century called The Jagiellonian University) that Mikolaj Kopernik, St. John Cantius, Karol Wojtyla (Pope John Paul II) and the current President of Poland, Andrzej  Duda studied, to name a few.

Jadwiga and Wladyslaw reigned together for almost 13 years despite the large difference in their age, they really understood each other.  Wladyslaw really loved Jadwiga, who despite the difficult beginnings of their relationship,  with time also loved him.  They had great respect and trust for each other.  The king wished for a  child, an heir.  Jadwiga gave birth to a daughter, Elizabeth Bonifacia, but after three weeks the little princess died.  Following her, two days later, because of childbirth complications, the 25-year-old Jadwiga died.  Her death was a shock for the Kingdom of Poland and was widely heard about in Europe.  The queen was buried in the Cathedral loin Wawel in Krakow.  Jagiello, even though he married three times afterward, until the end of his life, wore the ring given to him by his beloved Jadwiga.

People Remembered Her Love of God

Her subjects, who remembered the goodness and uniqueness of the queen came to the cathedral, so as to, in prayer, thank God for the gift of her life.  They also believed in Her Holiness and asked for her intercession in their affairs.  Numerous votive offerings at her tomb witness that her intercession was effective.  In a short time after her death, the efforts for her beatification began. When she became a saint in 1997, people prayed to her: Saint Jadwiga, help me to be merciful,  that in the face of Jesus, I will see the face of another person, recognize his desire and fill him with life.  May the Holt Spirit come to me through our prayer and sanctify me, that in contemplating the passion of our Lord Jesus Christ, I may become a servant of all.  Amen.  She was a patron of religion and scholarship. Jadwiga sought to promote the religious development of the nation that she had united, founded a special college for Lithuanians in Prague, and financed the restoration of the University at Krakow, which was affected after her death and later named the Jagiellion University.  Chiefly Jadwiga’s work, the university was modeled after the University of Paris and became the center of Polish civilization and influence.

She had Great Holiness

Saint Jadwiga was closely related to the saintly 14th-century princesses venerated in Hungary and Poland, including Elizabeth of Hungary and her nieces,  Kinga and Yolanda, and Solomea of Poland.  She was born to a family famed for its religious zeal.  She attended Mass every day.  In an ordinance with her family’s tradition, Jadwiga was especially devoted to the Blessed Virgin Mary.  An inscription engraved on her request on a precious chalice, which was placed in the Wawel Cathedral, asked Our Lady to place Poland under her protection.  Jadwiga was venerated in Poland soon after her death.  She was one of the most Christian queens.  Sermons written in the early 15th Century emphasized that Jadwiga had been a representative of the traditional virtues of holy women, such as mercy and benevolence.  Numerous legends about miracles were recounted to justify her sainthood.  The two best known are those of “Jadwiga’s cross” and Jadwiga’s foot.  Jadwiga often prayed before a large black crucifix hanging in the north side of Wawel Cathedral.  During one of those prayers, the Christ on the cross is said to have spoken to her.  The crucifix, “Saint Jadwigs’s Cross” is still there.  The supposed footprint, known as “Jadwiga’s foot” can still be seen in one of Krakow’s churches.