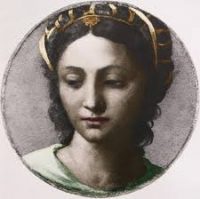 Bona Sforza was an Italian princess, who became Queen of Poland in 1518, as the second wife of King Sigismund I of Poland. At that time no one anticipated how significant the role she would play in European history. She was twenty-seven years younger than her husband, the king. She was raised in her Italian court in Bari, Italy, where she was educated in diplomatic skills. In 1518 her marriage with the Polish King Sigismund took place in Krakow, Poland. Her newly married husband lost his beloved wife, Barbara Zapolya, and was looking for a politically strong partner. Bona Sforza d’Aragona was born in 1494 in Italy and belonged to a powerful family of Milano. As her father was pushed away from the rule over Milano, Isabella, mother of Bona, decided to leave the city. Her aim was to arrange the most suitable marriage for her daughter that would bring the family political significance and help to regain lost goods. Bona was a champion of strong royal rule and an able assistant to her Polish king, which predestined her to play a leading role in the politics of the Polish court. Towards the end of the king’s life, when he began to lose interest in matter of state, she practically took the role of governing Poland. Bona had a strong right after her marriage with King Sigismund I. She tried to gain strong political position. She even began to form her own political party and gained from Pope Leon X, the right to appoint fifteen ecclesiastical benefice of very high importance. She believed that what she decides about successful implementation of politics is the access to appropriate funds. Therefore, she worked on the way of increasing the royal wealth.

The Royal Couple Had Only One Male Child

In 1527 Bona, while pregnant, fell off of her horse and gave birth to the second son, however that was a still birth. Bona was desperate to ensure her son, Sigismund Augustus, the right to be the rule over Poland. She used her influence and money to make the novelty crown her only son while, at the age of 101, in 1539, King Sigismund I was still alive. This was the only example in Polish history when the election of one of the kings took place during the life of a previous king, who was recognized as heir to the throne. That event created very strong opposition against Bona. Noble brothers adopted the bill that the next coronation would take place only after the death of Sigismund Augustus and with their consent, Queen Bona Sforza lost her influence, when in 1544 her son, Sigmund Augustus left Poland to take independent rule in Lithuania. He got involved in a relationship with Barbara who came from a powerful Lithuanian family of Radzivill that Bona was against. It caused numerous conflicts between her and her son and resulted in accusations of Bona poisoning her daughter in-law. Bona was not popular among her subjects due to the fact that she was the first queen who took over politics so openly. However, she did a lot of good for Poland. Thanks to her a lot of new food products, such as Italian pasta, spices, tomatoes or spinach were introduced into the Polish diet. She also supported educational development by providing possibility of foreign studies. She built bridges, fortresses and windmills as well as developed territories of wastelands.

Queen Bona was a patron of Renaissance culture, which began to further flourish in the Polish-Lithuanian Commonwealth. She was known as the Culinary Queen and is considered to have influenced the Polish and Lithuanian cuisines, having introduced many new dishes to the Commonwealth and bringing Italian vegetables which were not grown in Poland. Her love of fruits and vegetables caused Queen Bona to change not only the Polish palate, but left a lasting influence on the language as well. From Italy she brought with her many foods which had never been seen in Polish kitchens. Several vegetables, including celery, leeks, and lettuce were first eaten in Poland during her reign. She also brought her own cooks, gardeners and horticulturalists. In the Polish language many terms for vegetables were assimilated from Italian.
In Coming to Poland, Queen Bona opened the door wide to Italian artists. Besides her courtiers, she brought with her builders, architects, artisans, and painters. Noteworthy among the Italian artists who were at the court during Queen Bona’s time was Bartolomeo Berrecci. His genius is immortalized in one of the most renowned masterpieces of Renaissance art in Poland, the Zygmunt Chapel Wawel Castel Cathedral in Krakow, Poland. Here entombed is General Thaddeus Koscioszko, the hero of the Battle of Saratoga, which was the turning point in the American Revolutionary War. His body was placed in a vault at the royal Castle on Wawel, the holiest shrine in Poland.

One of the Fascinating Italian Ladies in Polish History

Bona Sforza was not a Polish lady, but an Italian lady, and one who by marriage became Queen of Poland and Grand Duchess of Lithuania. She was a consort who had quite an impact. Those familiar with the tumultuous political history of Renaissance Italy will recognize the Sforza family name, a powerhouse in Milan and a long-time force in Italian politics. As rulers of Milan, the Sforza family had at one time or another married into the families of Lord Jean of Monaco and Leonardo Da Vinci and eventually had marriages many times with numerous royal and papal families. Bona Sforza was born on February 2, 1494 , the third child out of four of Gjan Galeazzo Sforza, a patron and Renaissance man responsible for starting the Italian wars and who later got himself into a great deal of trouble with the king of France for trying to assassinate Jean II of Monaco. Despite such powerful ties, Bona Sforza had a rather tragic youth, being the only one of her siblings to survive childhood. She grew up surrounded by stories about great world explorers, danger from the Ottoman Empire, and the beauty of the Italian Renaissance. She was very ambitious, well-educated and charismatic. Her energy and passion for life made her one of the most important queens in Europe during her time, but nowadays she seems to be forgotten. The beautiful castle, Normano-Sveo, was where 8 year old Bona started her education, which allowed her to be one of the most interesting young ladies in Europe. Her teachers were the famous Italian humanists Antonio de Ferrans and Crisoto Colonna. She studied mathematics, history, classical literature, Latin, law, theology, geography, natural science, and learned how to play several instruments. When Bona was 24 years old, she left her country of Italy and became the second wife of Sigismund I, the old King of Poland and Grand Duke of Lithuania. She started her long travel to Crackow (Krakow), Poland, a country with a colder climate and completely different mentality.

If the Polish believed that the young and beautiful lady would be content as just the mother of the King’s children and to stay far away from politics, they would have been totally wrong. Bona started to be active politically from the moment she became the Queen of Poland. She didn’t understand the social norms in Poland, which was a far less civilized country than the kingdoms of Italy, France, or Spain at the time. Poland’s political position was strong, however. Society at this time started to advance and become a great powerful country. The first months of her stay in Poland were very difficult for Bona. The Italian princess was used to a diet full of fresh fruits, vegetables, and olive oil, but in Poland, they ate a lot of meat, which made her sick. Polish cuisine was based on meat, beans, and some srongly-spiced foods. After a few months, she started to grow her own vegetables in the garden near Wawel Castle. At first the Polish nobles did not understand Bona’s diet, but with time, vegetables started to be more popular among Polish people.

After King Sigismund’s Death in 1548, Queen Bona of Poland became a very important person in the court of her son, King Sigismund II August. He was the last king of the Jagiellon Dynasty, and a disappointment to his mother, Queen Bona. He didn’t have the impressive skills of his father, the king, which had allowed King Sigismund I to achieve huge successes as a ruler of Poland. Queen Bona had six children. Three of her daughters, Isabella, Catherine, and Anna became influential queens of Hungary, Sweden and Poland. They were well=-prepared to rule with their husbands and became important in European life. Sigismund II August, Queen Bona’s only son to survive to adulthood, was a romantic and focused on his marriages and art more than on being a serious king of Poland.

She was opposed to the Hapsburg family and supported the actions of the Ottoman Empire. Her correspondence with Hurrem Sultan, legal wife of Suleiman, the Magnificent, has been lost, but some details are still well known. It is believed that due to the good relationship between Queen Bona and Hurrem Sultan, Poland was saved from the attack of the Ottoman Army. Hurrem was a Polish woman, who cared about the family of the Polish king. For many years she sent gifts to King Sigismund I and his son—such as linen underwear and other items of clothing.

Queen Bona, much like many important women of her times, started to reform the country of Poland, allowing herself to be the richest landowner. Criticism of her actions increased, but Queen Bona supported the advancement of many ideas. Apart from being a protector of scientists and artists, she tried to influence the law as well. After the death of her husband the king, Queen Bona moved to Marsocia and created orchards, modern farms, etc. Eight years after the death of King Sigismund I, Queen Bona decided to go back to home to Bari, Italy. She died at age 63 on November 19, 1557, one of the most important women of the 16th century. She went back to Italy. One year later she was poisoned by a man named Gian Lorenco Pappacoda. He was her trusted officer, but he betrayed her and murdered her by the orders of King Phillip II of Spain, who wanted to avoid a huge debt to the former Polish queen. She was buried in St. Nicholas Basilica in Bari, Italy.