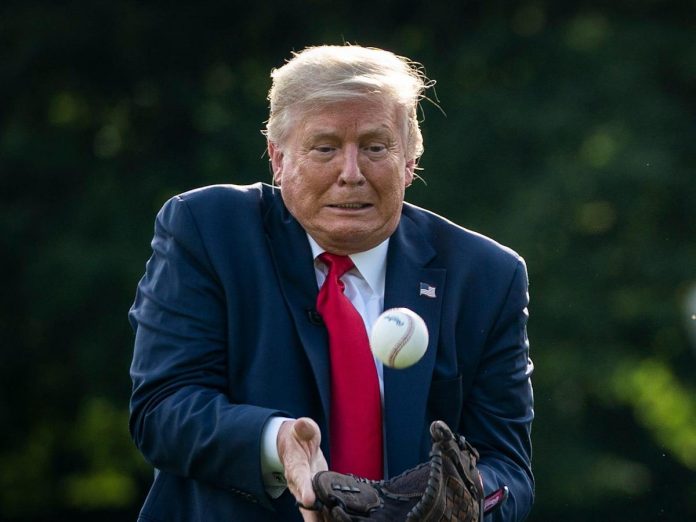 Then-President Donald Trump catches a baseball on the South Lawn of the White House on July 23, 2020 in Washington, DC Drew Angerer/Getty Images

Former President Donald Trump accidentally hit a child on the head with a baseball at the World Series last Saturday, video shows.

The former president was sitting in an open-air suite with his wife, Melania Trump, at the Atlanta Braves and Houston Astros game at Truist Park in Atlanta, Georgia.

In a clip from that evening, shared on TikTok by user @loupastore27, a young fan can be seen tossing his baseball to Trump in the hope of getting it signed.

The former president catches the ball, the video shows, and asks a secret service agent for a pen. After signing the baseball, Trump attempts to throw it back to his young fans.

The video captures the moment the former president tosses the ball back, pinging the youngster on the head.

According to TMZ, the boy wasn’t injured.

The young fan might make some money from the signed ball, should he choose to sell it. Authentic Trump-signed baseballs sell for between $2,000 to £3,000, TMZ Sports said.

The former president has previously boasted about his baseball prowess, writing in 2004: “I was supposed to be a pro baseball player. At the New York Military Academy, I was captain of the baseball team. I worked hard like everyone else, but I had good talent.”

In 2013, Slate reported that he tweeted that he was “said to be the best bbal player in N.Y.State.”