Understanding the Movement in Utica 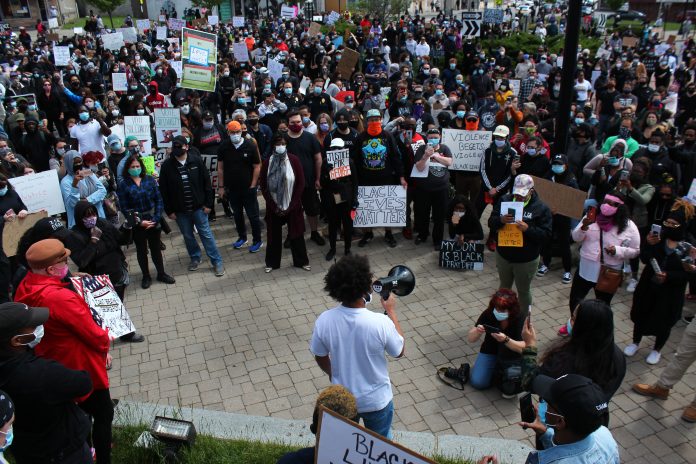 Local activist groups and what they stand for

The Utica area has seen a rise in public demonstrations in the past few years coming from many political sides. Many of these groups are defined by a set of goals and ideals that have been subject to speculation and rumors. We at the Phoenix believe an informed public is better for everyone, that is why we gathered some key facts about Utica’s most prominent demonstrators. Black Lives Matter (though not an official chapter) and CNY Citizens for Trump, as well as some lesser known but equally important factions.

What is Black Lives Matter? Or perhaps the better question is, “Do you support Black Lives Matter?”. It’s a confusing question, with good reason: BLM can be defined as an organization or as an ideology. Even the implication of “black lives matter” is being debated.

BLM was founded in 2013 by three women (Alicia Garza, Patrisse Cullors, and Opal Tometi) after the killing of Trayvon Martin. They’ve spent the last 6 years as advocates for Black America. Their adversaries say that BLM is a front for socialist agendas, citing the founder’s own Marxist views. However most who march seem to be less concerned with Marxism vs Capitalism and more concerned with racial injustice. The stated goal of the official BLM organization is to, “Eradicate White Supremacy and build local power to intervene in violence inflicted on Black communities by the State and vigilantes”. The website makes no mention of abolishing the police but it does argue for “Police Transformation”, suggesting reform over abolition.

The BLM organization is less an organization and more a loose association of 40 chapters. Each chapter is simply expected to adhere to the BLM website goals, but other than that can operate freely.  The closest BLM chapter is in NYC. So, as far as the organization goes, BLM is not in Utica.

BLM (the organization) or blm (the ideology)? If you say you support or oppose Black Lives Matter, does that mean you support the organization’s website goals or a specific BLM chapter’s goals? Do you mean “black lives matter” as a call to end racism? These are necessary distinctions: individual, chapter, or organization.

The Abolitionists regularly counter protest the conservative Back-The-Blue rallies throughout the area. They also collaborated with local Black activist Kim Jones in marching on UPD headquarters to demand the termination of Officer Felitto who assaulted a handcuffed suspect. They have been especially active in bringing attention to the suspicious killings of a Black man named Walter Washington and a Native boy named Jesse Lee Rose, both cases involving the UPD.

The Abolitionists believe in the abolition of the police and prison system. In the early 1800’s, before the use of Police Departments, Americans essentially policed themselves. By this precedent, the Abolitionists believe that we need to adopt a society free of police where it is up to the citizens to turn in criminals and prevent crime. Essentially, they seek independence of what they describe as a police state. They are black lives matter supporters, but are not affiliated with any BLM chapter.

Politically, they can best be described as Anarcho-Collectivists. They desire to have a society free of government and capitalism, and have more emphasis on the collective good rather than individual needs.

Originally from NYC, Freddie Hamilton spent 35 years working with at risks children and served briefly the Utica Common Council upon the death of Bill Philips. She leads a youth program through her CBO Rebuild the Village and is active in Democratic politics.

Patrick Johnson is a Racial Justice Consultant, heads Hoops-and-Dreams and the New-Life Institute, designed to help Black youths with education, life skills, gun violence prevention. He is community liaison for the DA .

Cassandra Harris-Lockwood is the CEO of the CBO For the Good, Inc.and owner operator of Phoenix Radio. For the Good provides “low-income residents and their neighborhoods with programs to overcome poverty through their own means.” Notably two Community Gardens and also a tutoring program where inner-city students can get academic assistance through Hamilton college and Colgate University. FTG is also the publisher of the Utica Phoenix.

These three individuals are seasoned and committed Black community development acivists. In that, their goal is to assist the development of the Black community with an emphasis on justice, education and financial investment within their own communities first.

They are notably the most active local advocates of Utica’s Black community and through their various programs and vast experience over the years, they’re very much in touch with the issues and people of the City.

Their use of the slogan “Black Lives Matter” is very narrowly meant to raise awareness over the many incidents of implicit racial bias, inequality, discrimination and police brutality against Black people in America. They are ardent about not mixing the slogan with political agendas.

These three advocates have over the years called out Police misconduct in the past. In 2012 the UPD sued the Phoenix over such a matter. They want to see the Police demilitarized. However, they say that the UPD has come a long way in the past ten years but they have a long way to go, understanding that the way forward is to work with the Police rather than against them.

Every Wednesday around 200 conservative citizens hold rallies for Congressional candidate Claudia Tenney. They are proud flyers of the Thin Blue Line flag, chant Blue Lives Matter, and call their rallies Back-The-Blue. Back-The-Blue is mostly composed of Christian-Rural-Conservatives that are very pro-NRA. They believe that their way of life (traditional family values, capitalism, and patriotism) can only be preserved by president Trump.

The rallies are admittedly against the Black Lives Matter movement, which they believe to be anti-American. Their position is that saying Black Lives Matter is segregationist and that All Lives Matter implies every life matters regardless of skin color. At a rally in Rome, they repeatedly said, “There is no racism in America”. On occasion, Claudia Tenney herself has attended these rallies. The Left-Wing group called The Abolitionists have regularly counter protested these rallies and there was a notable altercation between the two in Schuyler.

Their Christian zeal is readily apparent. Many of their members have stated belief that Donald Trump is President by divine right, though it is unclear if this view represents the majority.

The 3%ers are a paramilitary group formed when Obama was elected out of fear of a tyrannical federal government. The website denies being a militia however all members must swear an oath similar to that of the U.S. military and 3%er chapters usually run marksmanship drills. They define themselves by two things; staunch defenders of the 2nd amendment and as a force to keep an ever-growing tyrannical federal government in check (though they seem to be supporters of the head of the federal government, Donald Trump). It’s common to see them flying the Confederate, Thin Blue Line, Trump 2020, and Libertarian flags. There have been documented accounts of both Police and active military members being members of the group.

The organization has sent forces to counter Law Enforcement, provided security at the White-Supremacist/Neo-Nazi Unite the Right rally in Charlottesville, VA (though they vowed to never do that again) and protested refugee resettlement.

In 2018, three men (including a former police officer with ties to the 3%ers) were arrested for the bombing of an Islamic Center in Minnesota.

A pro 3%er named John Smaldon recently made a video asking his fellows to aggressively counter a BLM protests in Rome. Police prevented him from doing this via a warning.

When The Abolitionists counter protested a Back-the-Blue rally in Schuyler in August, it was a man, Jason Winters, wearing a 3%er T-shirt who marched across the road and started an altercation and then had to be held back by State Police when he pursued several protesters after they allegedly insulted his daughter.

According to their website, there is a 3%er chapter in NYS, but their official presence in Utica is still a mystery.