Twitter Caught Wind Of Paramore Performing With A Choir And 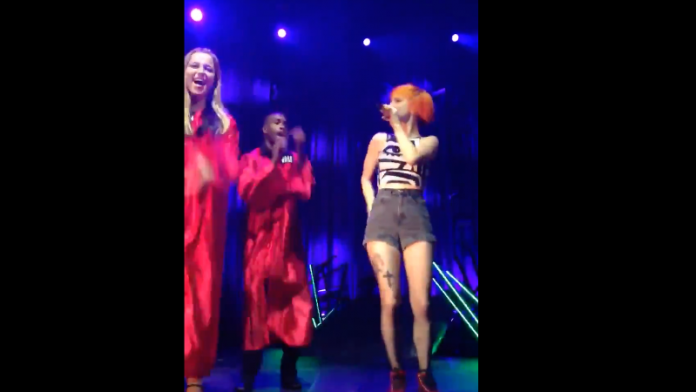 A new video of a recent Paramore performance has gone viral on Twitter, sparking Twitter to claim the band as part of the Black community. Frontwoman Hayley Williams put on a show in their recent concert, complete with a praise break. The singer gave new life to an almost 10-year-old song as she danced on stage alongside a church choir as she performed the group’s 2013 hit “Ain’t It Fun.”

this is why we say paramore is for the black community pic.twitter.com/7eTWGNxcZA

It didn’t take long for Twitter to jump on the video, making the claim, again, that Paramore and its pop-rock sound is one for the Black community. Not only was she praised for the inclusivity, but fans couldn’t help but notice her two-step alongside the choir.

Throwing a choir in the mix sealed the deal for one fan.

I always have been for Paramore. But once they threw the Choir in the mix of Aint it fun … I knew they were ours. https://t.co/MzEQhoB31N

Williams has apparently been down with the culture. As this user points out, she once allegedly lived next door to NBA player Rodney Hood, who taught her how to dance as children.

I’ll never forget when she tweeted that her friend Rodney taught her how to crip walk as a kid in Arkansas and it turned out to be fucking NBA Player Rodney Hood https://t.co/lCX4y7qGI2

The song has certainly earned its place in history as fans continue to enjoy the music.

The relationship black folk have with Paramore and Hayley Williams >>> https://t.co/Co1Ylu9FUp

Mastercard: In Solidarity with Atlanta | Hosted By Blavity